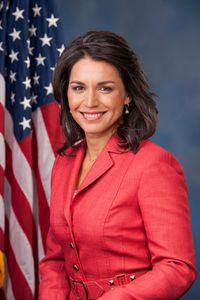 Former congresswoman and 2020 presidential candidate Tulsi Gabbard announced on October 11 that she is leaving the Democratic Party.

Tulsi ran for president in 2020 as a Democrat and suspended her campaign on March 19, 2020. Gabbard was a member of the U.S. House, representing Hawaii’s 2nd district. She was the first Hindu elected to Congress. Prior to her election to the U.S. House, Gabbard served in the Hawaii House of Representatives and on the Honolulu City Council.

Gabbard made the announcement on her podcast and posted a recorded statement to Twitter, saying “I can no longer remain in today’s Democratic Party that is now under the complete control of an elitist cabal of warmongers driven by cowardly wokeness, who divide us by racializing every issue & stoke anti-white racism, actively work to undermine our God-given freedoms, are hostile to people of faith & spirituality, demonize the police & protect criminals at the expense of law-abiding Americans, believe in open borders, weaponize the national security state to go after political opponents, and above all, dragging us ever closer to nuclear war.”

Gabbard did not indicate if she was affiliated with another party.