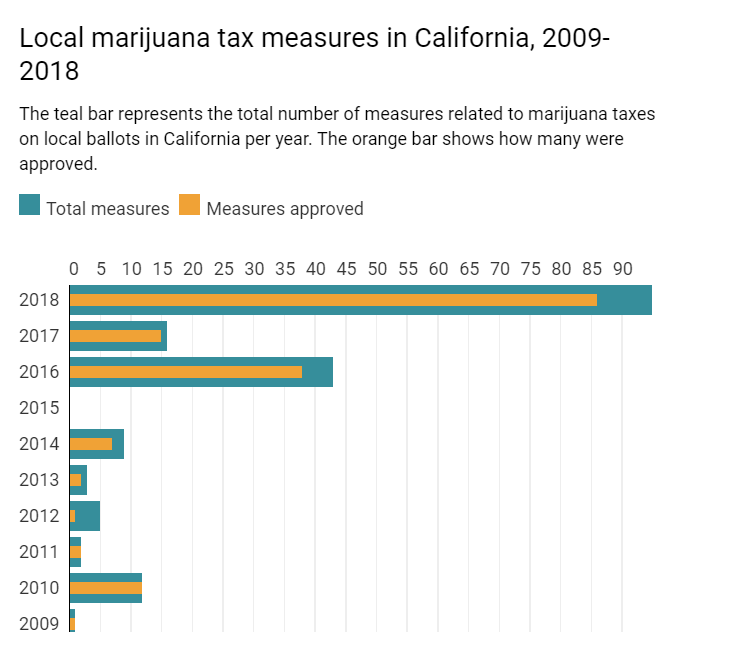 In some cities and counties in California, measures proposing taxes on recreational marijuana were on ballots prior to the legal effective date of sales and taxation under Proposition 64. Many cities and counties, however, had measures proposing taxes on recreational marijuana on the ballot in 2018 following the effective date. There were 95 local marijuana tax measures on ballots across California in 2018, compared to 43 in 2016—a 220 percent increase. There were 16 marijuana tax measures on local California ballots in 2017; all but one were approved. From 2009 through 2015, there were 32 local marijuana tax measures in California.
Of the 95 marijuana tax measures in 2018, 86 were approved, amounting to a 91 percent approval rate. The highest tax rate on marijuana businesses that was approved in 2018 was 15 percent of annual gross receipts. This tax rate was approved in Atwater, Calexico, Ceres, Chula Vista, Oakdale, Palm Desert, Patterson, Sonora, Suisun City, Tuolumne County, and Yolo County. Two measures were approved in 2016 that had higher tax rates—a 20 percent gross receipts tax in Santa Barbara County and an 18 percent gross receipts tax in Carson. Tax rates ranged from 0 percent to 15 percent of gross receipts and from $0 to $25 per square foot for manufacturing and cultivation. Some taxes were based on net profits rather than gross receipts. Others were calculated per ounce.
An estimated $2.5 billion was spent on the purchase of legal marijuana throughout the state in 2018, a figure that was down from 2017’s $3 billion, according to GreenEdge sales tracking. Proposition 64 authorized the state to levy a marijuana cultivation tax of $9.25 per ounce for flowers and $2.75 per ounce for leaves and a 15 percent excise tax on the retail price of marijuana. These statewide taxes are in addition to any local marijuana taxes. State marijuana tax revenues reached $60.9 million in the first quarter of 2018, $80.2 million in the second quarter, and $93.1 million in the third quarter. Total marijuana tax revenues were lower than the $630 million predicted for 2018 by former Gov. Jerry Brown (D).

Jessica Martini is a staff writer at Ballotpedia. Contact us at editor@ballotpedia.org.