The Supreme Court has finished hearing arguments for its October 2018-2019 term. Click here to read more about SCOTUS’ current term.

SCOTUS has ruled on three cases since our May 6 issue. The court has issued rulings in33 cases so far this term. Thirty-nine cases are still under deliberation.

Click the links below to read more about the specific cases SCOTUS ruled on since May 6:

Robert Pepper and other plaintiffs filed an antitrust lawsuit against Apple Inc., alleging the company was monopolizing the market for iPhone apps. Apple controls which apps can be sold through its App Store and keeps 30 percent of sales from apps developed by third-party developers that are sold in the App Store. A U.S. District Court dismissed the case. Citing the Supreme Court’s 1977 decision in Illinois Brick Co. v. Illinois, the district court ruled App Store customers could not sue for antitrust violations because they are purchasing their apps directly from the developers, not Apple. According to Illinois Brick, “only the overcharged direct purchaser, and not others in the chain of manufacture or distribution” are able to sue for antitrust violations. The 9th Circuit Court reversed the dismissal, ruling that consumers are purchasing from Apple, not the app developers.

The outcome: In a 5-4 opinion, the court affirmed the 9th Circuit’s ruling, holding that people who purchase apps through Apple’s App Store are direct consumers and can sue  Apple for having a monopoly in the market and increasing prices. Justice Brett Kavanaugh delivered the majority opinion and was joined by Justices Ruth Ginsburg, Stephen Breyer, Sonia Sotomayor, and Elena Kagan.

After serving time in prison for being part of a fraudulent subcontracting scheme, Billy Joe Hunt, a Parsons Corporation employee, filed a lawsuit alleging that Parsons and Cochise Consultancy Inc. violated the False Claims Act (FCA). Parsons and Cochise argued the statute of limitations barred Hunt’s claim. The statute requires a violation to be brought within six years of the violation or three years “after the date when facts material to the right of action are known or reasonably should have been known by the official of the United States charged with responsibility to act in the circumstances.” The district court granted the contractors’ motion to dismiss, but the 11th Circuit reversed and remanded the case.

The outcome: In a 9-0 opinion, the court held that a relator (private citizen) in a False Claims Act qui tam action lawsuit can rely on the statute of limitations, but the relator is not an official of the United States. A qui tam action refers to a lawsuit brought by a private citizen against a company who is believed to be in violation of the law in performing a contract with the government.

Justice Clarence Thomas wrote the opinion of the court.

In 1993, Gilbert Hyatt, a computer chip inventor, was audited by the Franchise Tax Board of California (FTB). Hyatt had moved from California to Nevada, and FTB said he owed $1.8 million in state income taxes, along with other penalties. “Hyatt sued FTB in Nevada state court for several intentional tort and bad faith conduct claims. FTB argued that the Nevada courts were required to give FTB the full immunity to which it would be entitled under California law,” according to the National Conference of State Legislatures (NCSL).

In Hyatt I, decided in 2003, the U.S. Supreme Court held that Nevada courts did not have to give FTB full immunity, and a Nevada district court awarded Hyatt over $400 million in damages. In Hyatt II, decided in 2016, the U.S. Supreme Court issued a 4-4 ruling on whether to overrule Nevada v. Hall, which permits a state to be sued in another state’s courts without its consent. The court also issued a separate ruling that limited the amount of damages Nevada courts could award.

FTB appealed the U.S. Supreme Court, which agreed to hear the case for the third time. In a 5-4 decision, the court overruled Nevada v. Hall and established that a state cannot be sued in another state’s courts without its consent. Justice Clarence Thomas delivered the opinion of the court. He was joined by Chief Justice John Roberts, and Justices Samuel Alito, Neil Gorsuch, and Brett Kavanaugh.

Here are the upcoming dates of interest in May and June:

What is it called when the court publishes a decision without indicating authorship?

The Senate has confirmed five nominees since our May 6 issue.

President Trump announced no new Article III nominees since our May 6 edition. 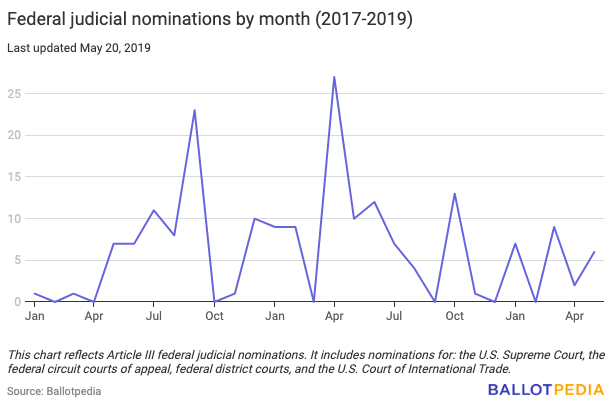 The federal judiciary currently has 144 vacancies. As of publication, there were 62 pending nominations.

According to the Administrative Office of U.S. Courts, an additional 15 judges have announced their intention to leave active judicial status during Trump’s first term.

The Senate Judiciary Committee reported four new nominees out of committee since our May 6 edition.

Do you love judicial nomination, confirmation, and vacancy information? We figured you might. Our monthly Federal Vacancy Count, published on the last Wednesday of each month, monitors all the faces and places moving in, moving out, and moving on in the federal judiciary.

Decisions of the court may be appealed to the 1st Circuit Court of Appeals.

The District of Rhode Island has three authorized judgeships. There is currently one vacancy. The breakdown of current active judges by appointing president is:

We’ll be back on June 3 with a new edition of Bold Justice.