Welcome to the Thursday, May 30, Brew. Here’s what’s in store for you as you start your day:

Michigan Attorney General Dana Nessel (D) issued a legal opinion last week stating that the distribution requirement and other provisions affecting the state’s initiative process passed in 2018 are unconstitutional. The attorney general’s opinion was requested by Michigan Secretary of State Jocelyn Benson (D), who would have been involved in the enforcement of the new initiative petition rules. Nessel’s opinion is binding on state officials unless a court ruling overturns it.

On December 31, 2018, Gov. Rick Snyder (R) signed Michigan House Bill 6595, which limited the number of ballot initiative petition signatures collected in any one congressional district to 15% of the total required. This limit effectively would require that petition signatures must be obtained from at least seven of the state’s 16 congressional districts. It also required that petitions disclose whether the petitioner is paid or volunteer and made other changes regarding petitioners, valid signatures, and the timeline for certification.

In the state Senate, 26 Republicans voted in favor of the bill, and one Republican joined all 11 Democrats in opposition. In the House, 56 Republicans were joined by one Democrat in voting to approve it. Five Republicans and 42 Democrats were opposed.

Besides Michigan, 16 other states have laws imposing distribution requirements that require that ballot measure petitions be signed by a minimum percentage of voters from different political subdivisions in order for the ballot measure to qualify for the ballot. This requirement can be based on a state’s counties, congressional districts, or state legislative districts. 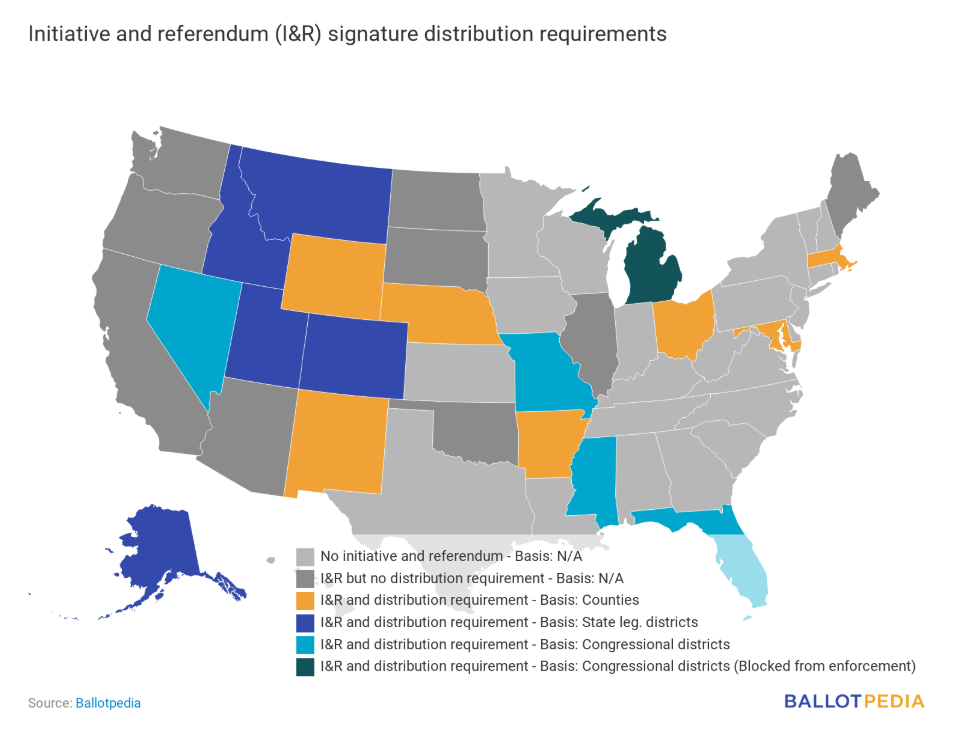 Nessel’s opinion stated that the distribution requirement provisions of HB 6595 imposed an additional obligation for qualifying an initiative for the ballot beyond what was required or authorized by the Michigan Constitution. She cited a 2018 Michigan Supreme Court ruling that held that the initiative and referendum rights “can be interfered with neither by the legislature, the courts, nor the officers charged with any duty in the premises.”

Rep. Jim Lower (R)—a sponsor of HB 6595—said to the Washington Post in response, “I don’t think anybody’s surprised. I disagree with the conclusions she has come to, and I think it will be litigated.” Lower argued that spreading signature gathering efforts out across more of the state is a common-sense requirement and demonstrates that a proposed initiative has broader support.

Michigan is currently under divided government as Republicans control both chambers of the state legislature and Gretchen Whitmer (D) is governor. In the 2018 elections, Democrats were elected governor, attorney general, and secretary of state—all offices held by Republicans going into 2018.

In the attorney general race, Nessel defeated Tom Leonard (R) and three other candidates to succeed Bill Schuette (R), who was term-limited. Nessel received 49.0% of the vote to Leonard’s 46.3%. In the secretary of state election, Benson defeated Mary Treder Lang (R) and two other candidates to succeed Ruth Johnson (R), who was also term-limited. Benson received 52.9% of the vote to Lang’s 44.0%.

Acting Texas Secretary of State David Whitley (R) resigned May 27 just before the end of the Texas legislative session. Whitley was appointed by Gov. Greg Abbott (R) on December 17, 2018, but needed to receive confirmation from two-thirds of the state Senate—21 out of 31 senators—to continue serving in a permanent capacity through 2021.

Whitley was supported by all 19 Republicans in the Senate, but all 12 Democrats announced their opposition to his confirmation earlier this year.

Whitley thanked Abbott in his resignation letter, writing, “Thank you for giving me the opportunity to serve Texas. Working alongside the employees in the secretary of state’s office, county election officials, and representatives of our #1 trading partner, Mexico, has been my distinct honor and privilege.”

As the calendar turns to June, I want to let you know about three upcoming Ballotpedia events for you to put on your calendar.

Next week I’ll be hosting a webinar with David Luchs—one of our staff writers—about the June 8 mayoral runoff elections in Dallas and San Antonio. We’ll also discuss why mayoral races matter and the significance of local elections. The webinar will take place on Tuesday, June 4, and will begin at noon ET.

Later in June, Sarah Rosier—you remember her as my Brew predecessor and our current Director of Outreach—will be conducting the next edition of our Ballotpedia Insights series. She’ll interview Dr. Stevan Hobfoll, the author of Tribalism: The Evolutionary Origins of Fear Politics, to discuss how the political environment has changed and what instigated these shifts. I always learn something new at these Ballotpedia Insights sessions, so I hope you’ll make plans to join us. It will begin on June 20 at 1 p.m. ET.

We’ve scheduled the August edition of Ballotpedia Insights as well. Sarah will be joined by Adam Probolsky of Probolsky Research to discuss the state of market and opinion research on elections and public policy. That session will be held on August 7 and start at 1 p.m. ET.

You can sign up for free and find more information about these interesting and informative webinars at the link below. I hope you’ll make plans to attend!