Eleven states are holding gubernatorial elections in 2020, and 44 are holding state legislative elections. In a majority of these states, the officials elected in 2020 will play a part in redrawing legislative maps governing elections for the subsequent 10 years.

The process by which legislative district boundaries are drawn is called redistricting. Every 10 years, the U.S. Census Bureau delivers detailed population datasets to the states. Redistricting authorities in the states use these datasets to redraw congressional, state legislative, and even local district maps.

In 34 states holding state legislative elections in 2020, the legislatures themselves will play a significant role in that state’s 2020 redistricting. In eight of next year’s gubernatorial elections, the winner will have veto authority over the state legislative or congressional district plans approved by legislatures.

Redistricting authorities in the United States 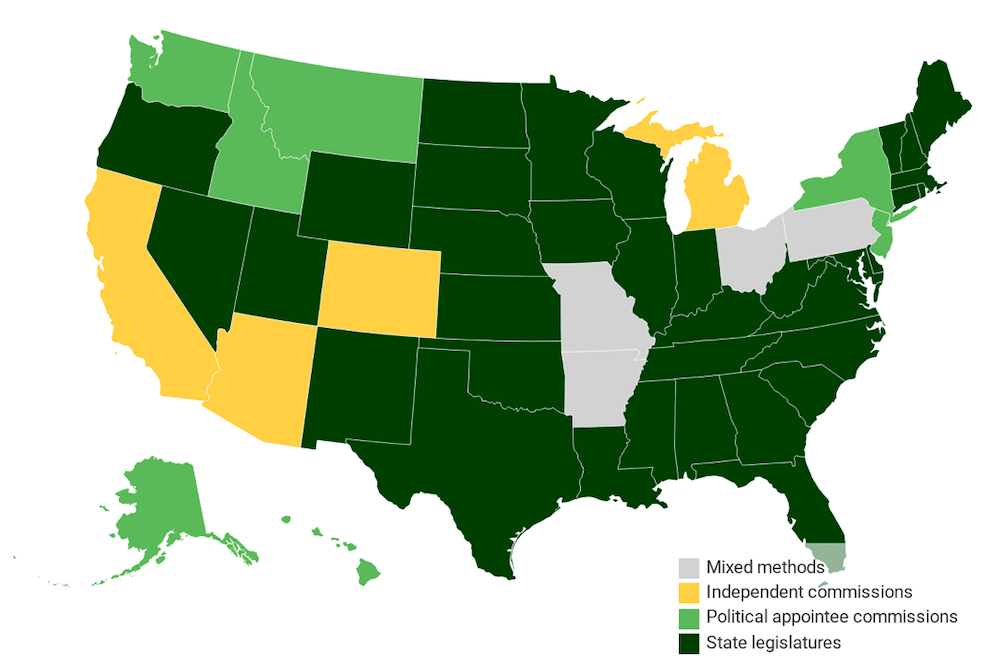 Trifecta control—where one party controls the governorship and both chambers of a state’s legislature— changed as a result of the 2010 elections in 12 states where legislatures were responsible for redistricting. Prior to these elections, seven of the 12 were Democratic trifectas and the rest had divided governments.

Of the 12 states which saw trifecta control change in 2010, three—Alabama, Indiana, and Ohio—are currently Republican trifectas. Three states have become Democratic trifectas—Colorado, Oregon, and Maine. The rest are divided governments.

Our briefing yesterday discussed which states have changed their redistricting processes since the 2010 cycle, recent federal and state court decisions regarding partisan gerrymandering, and the upcoming 2020 Census. If you weren’t able to attend, click here to view the recording.

At Ballotpedia, we provide election coverage of all officeholders in the nation’s 100 largest cities—including mayors, city council members, and other municipal officers. We also cover every election on the ballot in these cities, such as county officials and local ballot measures.

Here’s our weekly summary of the local news we’re covering. Email me to suggest some interesting local election coverage in your area—I’d love to hear about it!

Former at-large councilwoman Mary-Ann Baldwin finished first with 38% of the vote and attorney Charles Francis finished second with 31% in Raleigh’s mayoral general election October 8. Since no candidate received a majority of the vote in the six-candidate field, a runoff will be held on November 5 if Francis requests it. Second-place finishers have until October 17 to ask for a runoff.

Raleigh also held elections for all seven city council seats—two at-large and five district seats. Six of seven incumbents ran for re-election. Three incumbents won outright in the primary, one was defeated, and two incumbents—at-large councilman Russ Stephenson and District D councilwoman Kay Crowder—qualified for a runoff. Neither Stephenson nor Crowder has said whether they will request a runoff.

Two incumbent Birmingham City Council members appeared to win special elections October 8 and a third incumbent advanced to a November 19 runoff. The three incumbents had all been appointed by the council in 2018 to fill vacancies after the previous members had resigned. The winners of these elections will serve until all nine council seats will next be up for regular election in 2021.

Vote counting on election night was delayed because voting machine memory cards that contained results were inadvertently placed in sealed boxes with paper ballots in certain precincts. The results on those cards were tabulated after the sealed boxes were opened the following day after a judge’s order.

Voters also appeared to approve three ballot measures renewing property taxes for the city’s public schools. Election night results showed all three measures ahead with about 90 percent of voters approving them. The total tax rate renewed by the propositions was $0.98 per $100 of taxable property for 25 years. Birmingham City Schools reported that the taxes generate about $32 million per year—14% of its annual budget. The taxes were last approved in 1991 and were set to expire in September 2021.

Our Brew story Tuesday previewing Louisiana’s October 12 state legislative primary elections—happening alongside the gubernatorial and other state executive primaries—said that contested elections will be held in 94 seats this year, more than either the 2011 or 2015 election cycles. There were 70 contested state legislative elections in 2015 and 81 in 2011.

Louisiana voters will elect all 144 members of the state legislature—39 state Senators and 105 state Representatives—using what’s known as a blanket primary, where all candidates appear on the ballot, regardless of party. Any candidate that receives more than 50 percent of the primary vote wins the election outright. If not, a general election will be held for the top two finishers Nov. 16.

This caused me to wonder—and quiz our Brew readers—how many Louisiana state legislative seats switched partisan control in 2015?