On Nov. 5, voters in New York City approved a city charter amendment establishing ranked-choice voting (RCV) for municipal primary and special elections beginning in 2021. The amendment, which passed with 74 percent of the vote, makes New York the largest city in the nation to use RCV for local elections.

How many jurisdictions have adopted RCV? 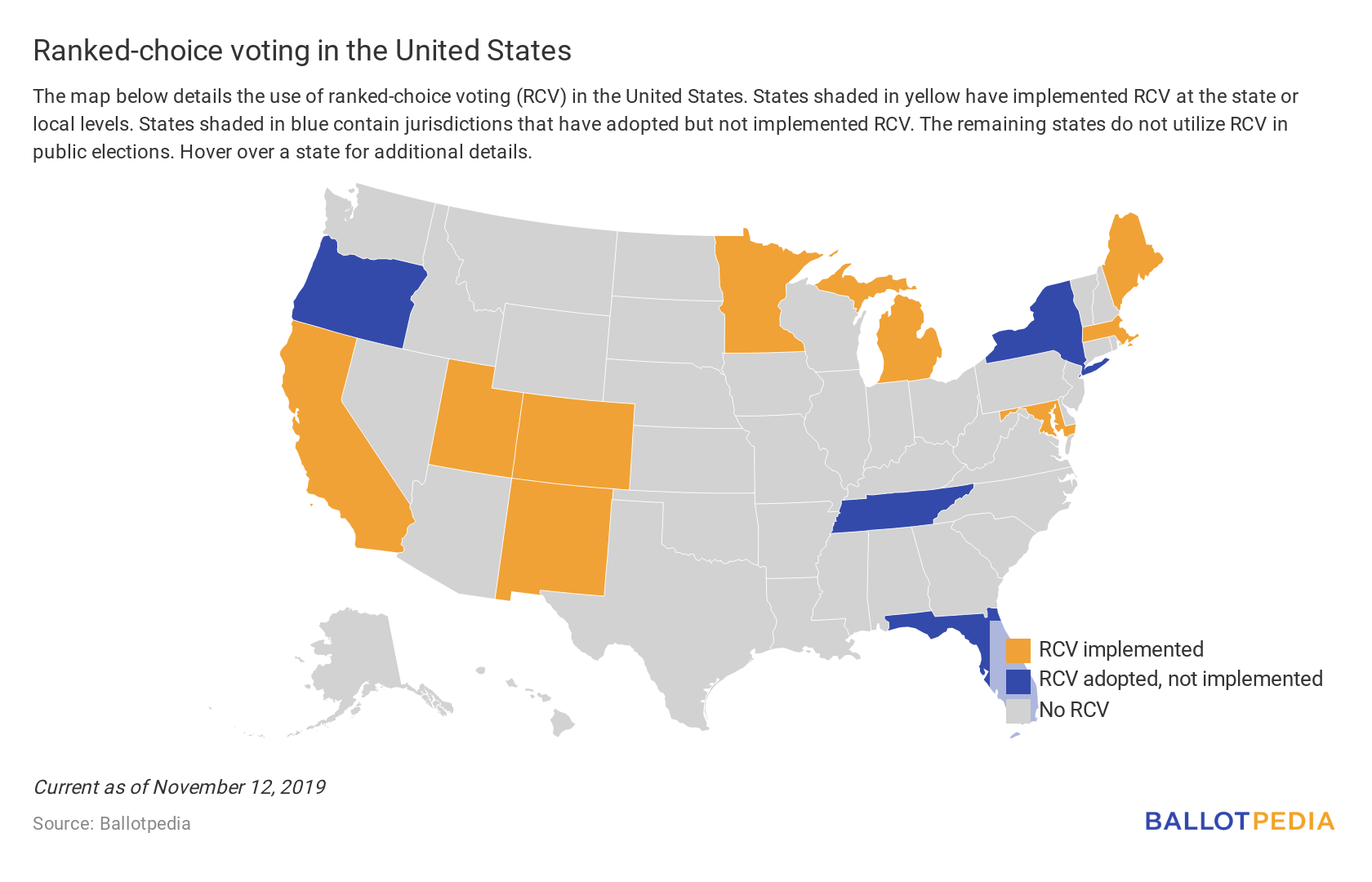 Maine is expected to use RCV in the 2020 presidential election, making it the first jurisdiction to do so. On Sept. 6, Maine Governor Janet Mills (D) announced in January she would allow legislation requiring the use of RCV in presidential elections to become law without her signature. The law will not take effect in time for the March 3 primaries, but it will be in effect for the 2020 general election.

According to FairVote, a group that advocates for the expanded use of RCV, the following presidential preference primaries and nominating caucuses will incorporate RCV in 2020:

Wolf said, “These changes will make it easier for people to vote, participate in our democracy, actually to take care of the most fundamental responsibility of citizenship: voting.”

The state House passed the bill 138-61 on Oct. 29, with 105 Republicans and 33 Democrats voting in favor.  The Senate followed suit the same day, approving the bill 35-14, with 27 Republicans and eight Democrats voting in favor. State Rep. Malcom Kenyatta (D), who voted against the bill, took issue with the provision eliminating straight-ticket voting: “We’re making this process more difficult. We’re ignoring the cultural concerns of people who have voted in that way for years and years and years. And we’re doing it all at a time when we are changing the entire voting system, which is going to lead to lines lead to delays – and, actually, maybe lead to people not exercising their right to vote.”

The same three-judge panel also temporarily blocked the use of the state’s congressional district maps in the 2020 elections. The move came after the maps’ opponents filed a lawsuit alleging that it, too, was unconstitutional partisan gerrymander under state law. The panel did not issue a full decision on the merits, noting that “disruptions to the election process need not occur, nor may an expedited schedule for summary judgment or trial even be needed, should the General Assembly, on its own initiative, act immediately and with all due haste to enact new congressional districts.”

Democrats praised the court’s order. Eric Holder, former U.S. Attorney General and chair of the National Democratic Redistricting Committee, said, “For nearly a decade, Republicans have forced the people of North Carolina to vote in districts that were manipulated for their own partisan advantage. Now – finally – the era of Republican gerrymandering in the state is coming to an end.” State Republicans criticized the court’s order, although it is not yet clear whether they will appeal. State Senate Majority Leader Phil Berger (R) said, “With judges deciding behind closed doors how many Members of Congress from each party is acceptable, judicial elections have become the most consequential in America.”

On Nov. 1, 2019, the plaintiffs petitioned the North Carolina Supreme Court to review eight remedial state House districts in the Forsyth-Yadkin and Columbus-Pender-Robeson county groupings, alleging these districts were still unconstitutional. On Nov. 4, 2019, state lawmakers announced the formation of an interim committee to consider how to proceed on the question of the congressional district plan. The committee held a public hearing on Nov. 5, 2019.

In 2020, North Carolina will hold elections for its 13 U.S. representatives and all 170 members of the state legislature. Ballotpedia has identified the North Carolina state House and Senate as battleground chambers in 2020. Republicans currently control both chambers. Democrats would need to gain four Senate seats and six House seats in order to win majorities in the two chambers. The primary election is slated for March 3, 2020, and the filing deadline for major party candidates is currently set for Dec. 20, 2019.