On Jan. 27, Wisconsin Gov. Tony Evers (D) signed an executive order creating an advisory redistricting commission. The commission will prepare congressional and state legislative district plans for Wisconsin lawmakers to consider. The plans are advisory, and the legislature will be under no obligation to accept the commission’s recommendations. The commission will be made up of members from each of the state’s congressional districts. Elected and political party officials, as well as lobbyists, will be barred from serving as commissioners. The order specified neither the number of commissioners nor the manner of appointment. It established the following criteria for the commission’s proposed maps:

Upon completion of the census in 2020, congressional seats will be reapportioned to the states on the basis of population. Complete data sets will be delivered to the states in early 2021, at which time they will redraw their congressional and state legislative district maps. The Wisconsin congressional delegation is expected to remain unchanged at eight seats post-census. The legislature is responsible for drafting and adopting both congressional and state legislative district plans, both of which are subject to gubernatorial veto. Lawmakers are expected to take on redistricting as soon as census data is made available in early 2021. 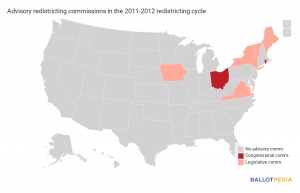 On Jan. 14, the Missouri Supreme Court, in a 5-2 ruling, upheld a lower court’s decision striking down a state law requiring voters without photo identification to sign affidavits before voting. Missouri voters may now present either photo or non-photo identification at the polls and cast regular ballots without signing affidavits.

On Oct. 9, 2018, Richard Callahan, a state court judge, originally enjoined the affidavit provision. Callahan ruled that the affidavit’s language was “contradictory and misleading,” requiring signers to “swear that they do not possess a form of personal identification approved for voting while simultaneously presenting to the election authority a form of personal identification that is approved.” Callahan ordered officials to desist from executing the affidavit for voters presenting non-photo ID at the polls. Callahan also ordered officials not to distribute any materials indicating that a photo ID is required to vote. State officials appealed to the Missouri Supreme Court, asking it to stay Callahan’s order. On Oct. 19, 2018, the Court denied the request for a stay, but permitted the appeal to proceed. This allowed Callahan’s order to stand in advance of the Nov. 6, 2018, election.

The Court heard oral arguments in the appeal in Oct. 2019. Justice Mary Russell wrote the court’s opinion, which was joined by Chief Justice George Draper and Justices Paul Wilson, Patricia Breckenridge, and Laura Stith. Justices Wesley Powell and Zel Fischer dissented.  Russell wrote, “Because the affidavit requirement of sections 115.427.2(1) and 115.427.3 is misleading and contradictory, the circuit court’s judgment declaring the affidavit requirement unconstitutional is affirmed. Further, the circuit court did not err in enjoining the State from requiring individuals who vote under the non-photo identification option provided in section 115.427.2(1) to execute the affidavit or in enjoining it from disseminating materials indicating photo identification is required to vote.”

All seats in the U.S. House of Representatives are up for election in 2020. How do prospective candidates get on the ballot in their respective states?

Generally speaking, a candidate must pay a filing fee, submit petition signatures, or both in order to appear on the ballot. Filing requirements often vary from state to state and between districts within a state. Filing requirements also differ according to a candidate’s partisan affiliation. Candidates of the major political parties are sometimes subject to different requirements than unaffiliated candidates.

Petition signature requirements exist on a broad spectrum. For example, in Kentucky, a partisan candidate for the U.S. House must submit a petition containing two signatures in order to get on the ballot (the candidate must also pay a $500 filing fee). This petition requirement is the lowest in the country. By contrast, an unaffiliated candidate for Georgia’s 5th Congressional District must submit 26,538 petition signatures to get on the general election ballot, than in any other congressional district or state (the candidate must also pay a $5,220 filing fee).

We have compiled complete filing requirements for major-party and unaffiliated candidates in all 435 U.S. House districts. To peruse the data, click here.

Redistricting legislation: The map below shows which states have taken up redistricting policy legislation this year. A darker shade of red indicates a greater number of relevant bills.