In recent weeks, policymakers across the country have postponed elections and otherwise modified their election procedures in response to the COVID-19 outbreak. In order to chart these developments with greater precision, we will, beginning this week, publish The Ballot Bulletin on a biweekly basis.

Elections in the midst of a pandemic: four experts speak to the challenges that lie ahead

In response to the COVID-19 pandemic, dozens of states have either postponed upcoming elections or made modifications to voting and candidate filing procedures. This has prompted policymakers, pundits, voters, and others to discuss and debate the changes and challenges that might lie ahead  We asked four election policy experts, each occupying a different point on the spectrum of debate, the following questions:

Here are their responses.

Logan Churchwell: The biggest challenge is fear. States should not be reaching for increased mail balloting out of panic. There are several reasons for this. First and foremost, states do not maintain their voter rolls for accuracy to the level required to be throwing millions of ballots in the mail with any sort of automation. Too many states rely on polling place check-ins to be a last line of defense against an outdated record. Mail ballots go to the last address on file regardless if the person is dead, moved, registered in duplicate, or in prison. Second, local officials do not have the manpower for universal mail balloting nationwide. Hundreds of thousands or more human hands will be required to open envelopes, verify signatures, and handle the ballots for tabulation. Elections offices risk cutting into still scarce medical PPE supplies if this happens. In the best of times, this work is done largely by volunteers. Third, it makes no sense to close polling places down if Americans can still go grocery shopping whenever they want. Voting booths can be cleaned just as easy as the check-out aisle. Election officials should reach for the Lysol before massive changes to voting on shoestring budgets and little time. Finally, Americans tend to trust their elections because most saw with their own eyes that nothing went wrong in the voting place. That basic level of trust is ripped away with all voting in the mail.

Edward Foley: What happened in Wisconsin should be a wake-up call that we can’t let anything like that happen again for the November election. What went wrong? While there’s plenty of blame to spread around among all three branches of Wisconsin’s government (legislature, governor, supreme court), the big-picture problem was failure to separate the health-specific question of whether in-person voting on Election Day was appropriate given the pandemic (short answer, no) from the election-question remedy of what adjustments to the voting process should be made, and by whom, as a consequence of the health necessity. The Wisconsin legislature and governor were locked in a partisan tug-of-war over who has the power to change the date of the election, when that wasn’t the relevant question. Instead, what mattered is who had the power to prohibit public gatherings at polling places, like sporting events and other public venues. The answer to that, as the dissenting opinion in the Wisconsin Supreme Court pointed out (by quoting the relevant state statute), was the state’s Department of Health Services. But by the time this observation was made (at the end of the night before Election Day), it was too late. As a result, Wisconsin was unable to achieve what Ohio successfully did, closure of the polls on Election Day to protect public health, with subsequent remediation of the electoral process in order to assure that all eligible voters had an adequate opportunity to cast a ballot in the election. Ohio’s remediation was accomplished, first, by the Secretary of State and then the state’s legislature modifying the remedial plan—an outcome that the federal court deemed constitutionally sufficient to protect voting rights.

Looking ahead to November, it’s essential to put in place plans for absentee voting that recognize both the need for substantially increased reliance on absentee ballots and the risks of problems, including litigation, that flows from greater use of absentee voting. Without spelling out all the details here, the basic principles must be (1) genuine opportunity for all eligible voters to cast a ballot without a health-related fear caused by COVID-19; and (2) reasonable measures to secure the integrity of the voting process for the benefit of the entire electorate. It is possible to satisfy both principles as long as there is the good will to do so, for the sake of electoral accountability (“governments … deriving their just powers from the consent of the governed”), rather than attempting to structure the voting process to secure a partisanship or incumbency advantage. If appropriate measures are adopted in advance, it will be significantly easier to avoid the kind of 5-4 U.S. Supreme Court decision that is so distressing to public confidence that the judicial enforcement of election rules is nonpartisan. The key is to prevent a situation where the outcome of the presidential election is perceived to rest on a vote tally that does not accurately reflect the will of the participating electorate because either (a) there has been an unremedied integrity breach, or (b) unremedied disenfranchisement of valid voters.

Walter Olson: The November 1918 national vote held during the Spanish flu epidemic was a triumph of legitimate democratic succession, but at some cost: turnout sagged and scholars say in-person rallies, permitted in the final days, spread the infection. We can do better. Whatever your previous thinking on absentee and vote-by-mail procedures, minimizing the need for in-person voting is now the need of the hour. Every vote cast by mail is one that doesn’t add to waiting lines (already a headache even before social distancing) and the need for interaction at sign-in tables.

Use of the mails aside, we should encourage as much of the process as we can to move online or even where appropriate outdoors (sunlight and fresh air probably disrupt virus transmission). Our greatest challenge is lack of time from being caught unprepared.

Drew Penrose: There are really two kinds of changes we have seen so far: changes to how voters can cast a ballot while still complying with all the measures in place to prevent spread of the disease, and changes to how candidates and campaigns comply with new COVID-19 restrictions. The former has gotten a lot of much-deserved attention, with more places making it possible for people to request absentee ballots, new deadlines for returning mailed-in ballots, and adjusting election dates entirely. We will certainly see more of that. The latter deserves additional attention as well: candidates and ballot measure campaigns were actively underway before COVID-19 hit us and made it impossible to gather petition signatures in-person. Although some states have adjusted petition requirements and deadlines, much more should be done, and several campaigns are bringing their cases into court. This issue is just as much about fairness to voters as it is fairness to these campaigns – ballot access is what determines what choices voters will have on their ballots, and having real choices when voting is absolutely critical to a functional democracy.

This crisis has demonstrated how frail much of our electoral infrastructure is. We need to make sure that the November election has safeguards in place to ensure that a representative democracy can survive and thrive beyond this pandemic. That includes more than just voting: in between the primaries and general election, we will have the national conventions of the political parties and candidates and ballot measure committees attempting to reach voters during the campaign itself. It will also be necessary for our legislatures and courts to be able to meet and do business to pass new rules and adjudicate important disputes prior to Election Day.

Wisconsin’s spring elections proceeded as scheduled on April 7. The elections on the ballot included the state’s Democratic presidential primary, a state supreme court and three state appeals court elections, a statewide ballot measure, and several municipal and school board contests.

On April 6, the Wisconsin Supreme Court voted 4-2 to block an executive order issued earlier in the day by Governor Tony Evers (D) that would have postponed in-person voting in the spring elections to June 9. As a result, in-person voting proceeded as scheduled. Also on April 6, the U.S. Supreme Court voted 5-4 to stay a lower court order that had extended the absentee voting deadline. As a result, the absentee ballot postmark and in-person return deadlines were both reinstated to April 7.

Meanwhile, 17 states and one territory that were scheduled to conduct state-level elections in March, April, or May, have postponed them. These states are colored in dark blue on the map below. In another six states, state-level officials have modified, or have authorized the modification of, municipal election dates. These states are colored in light blue on the map below. Further details are provided below the map. 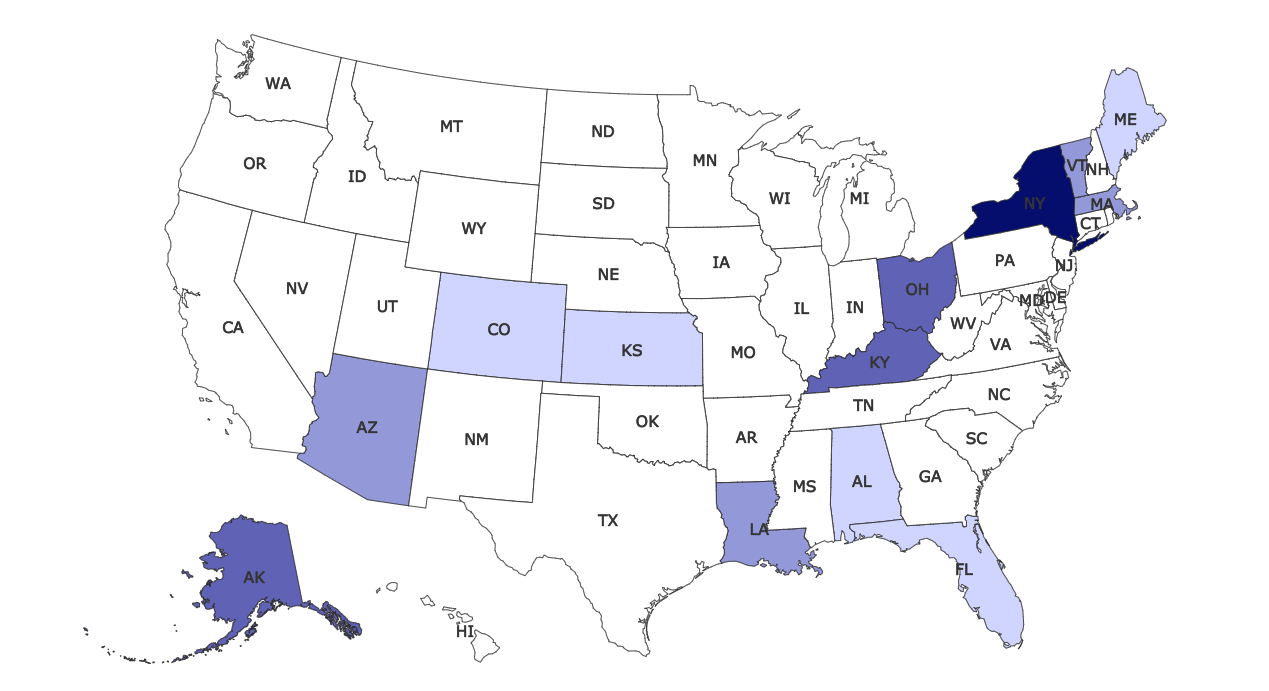 In our next issue, due out April 22, we will examine the legal mechanisms states can use to modify or postpone elections. We will also take a closer look at those states that have temporarily expanded absentee voting.