In response to the COVID-19 pandemic, at least 22 states have modified their absentee/mail-in voting procedures for select upcoming elections. Today, we examine this topic in depth, reviewing both the permanent statutory framework for absentee/mail-in voting and the temporary modifications made in response to the current public health emergency. We also turn our attention to the legal mechanisms for making these changes and the emerging debate surrounding the issue.

Every state provides for some mechanism whereby voters can cast ballots without visiting a physical polling place. The terms absentee voting, voting by mail, all-mall voting, or voting from home are sometimes used to describe these methods, which can be divided into two categories: automatic mail-in ballot systems and request-required mail-in ballot systems.

Automatic mail-in ballot systems require that all eligible voters automatically receive either a ballot or ballot application. These are sometimes referred to as all-mail voting systems. Access to mail-in voting is not restricted to voters meeting certain eligibility criteria.

Request-required mail-in ballot systems require that eligible voters initiate the process for receiving, and casting, mail-in ballots. These have traditionally been described as absentee voting systems. Access to mail-in voting may be restricted to voters meeting certain eligibility criteria. 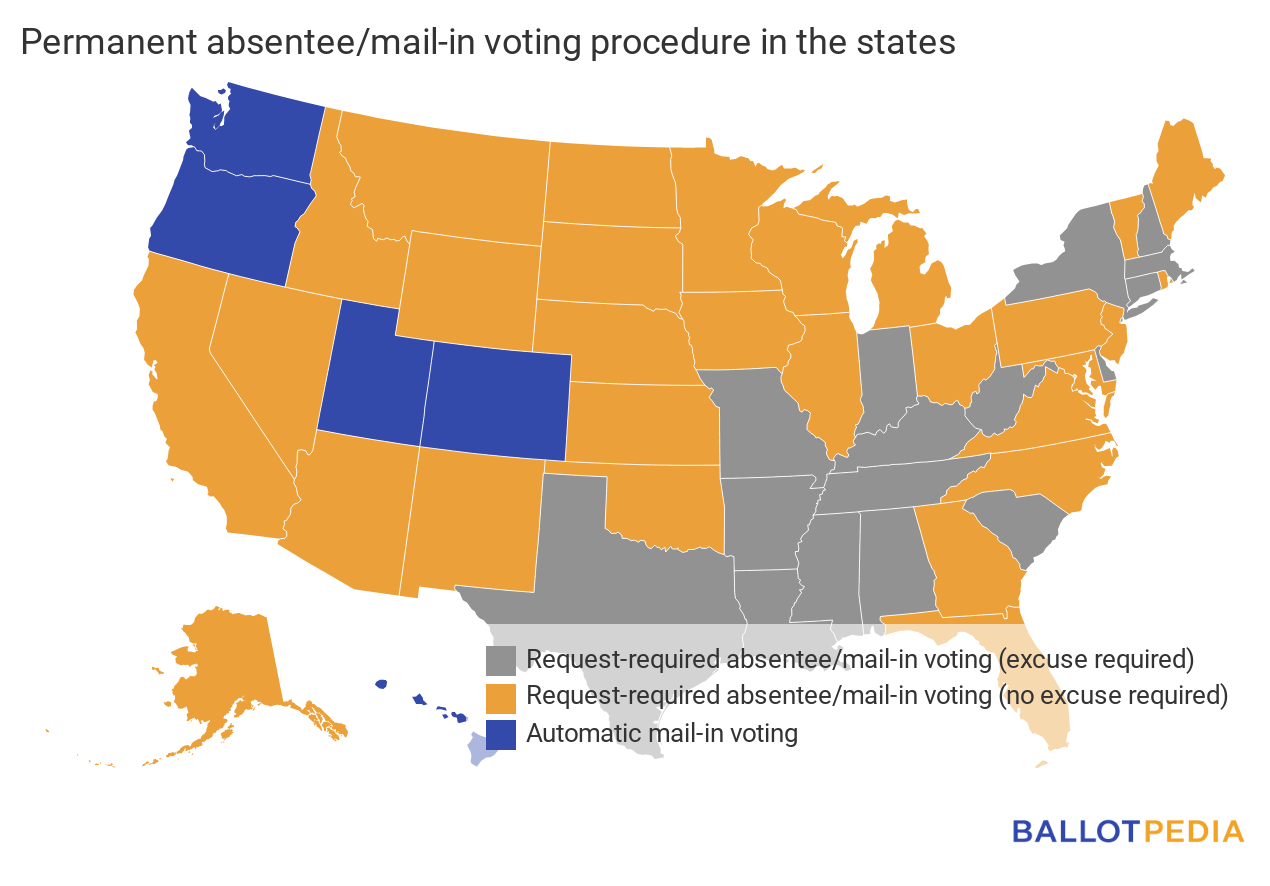 Modifications in response to the COVID-19 outbreak

To date, at least 22 states have modified their statutory absentee/mail-in voting procedures in response to the COVID-19 outbreak. These modifications can be divided into four broad categories: 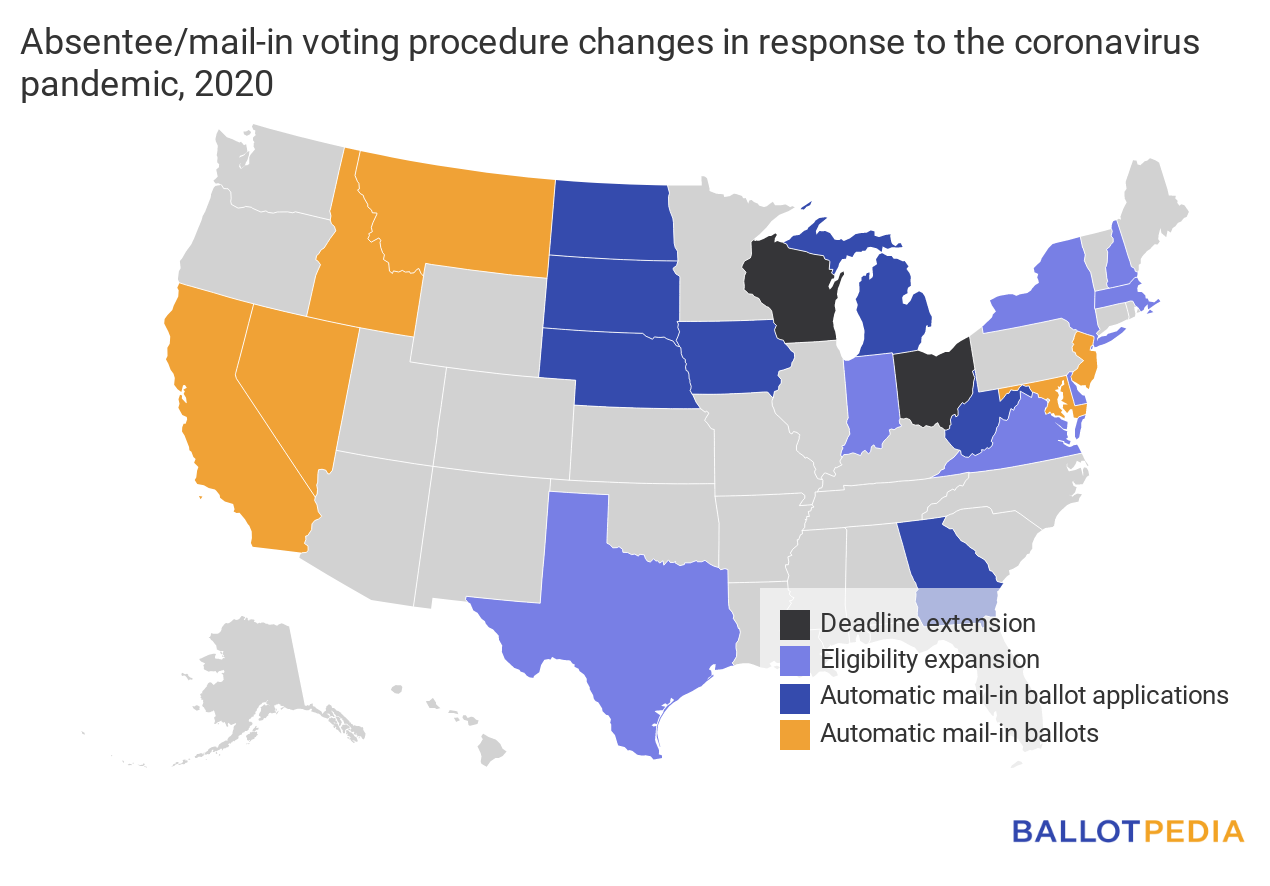 At least eight states have statutes dealing specifically with the expansion of absentee/mail-in voting in response to an emergency: Alabama, Hawaii, Illinois, Indiana, Kansas, Maryland, Utah, and Virginia.

Another eight states, at a minimum, have statutes granting state officials the authority to make general changes to election procedures in response to an emergency. The authority to expand absentee/mail-in voting may be permitted under these statutes. These states are California, Iowa, Louisiana, Maine, North Carolina, Oklahoma, West Virginia, and Wyoming.

Expansions on absentee/mail-in voting procedures have prompted considerable debate in recent weeks. A couple of representative examples of recent commentary are presented below. Additional commentary can be accessed here.

Ronald J. Krotoszynski, Jr., writing for The Atlantic on March 27, said the following in favor of expanding absentee/mail-in voting:

“Today, and possibly even this November, the potential cost of casting a ballot in person on Election Day could be considerably higher, given that crowds and shared surfaces (such as the interface of an electronic voting machine) present perfect environments for spreading the coronavirus. The election is too important to let fall prey to this virus. Americans must ensure that the country’s democratic process moves forward as scheduled. And there is one time-tested and straightforward way to do that: nationwide vote by mail. The question of expanding access to voting by mail should not be left to the states to decide. The country needs a federal law that ensures all citizens may exercise their right to vote, without having to jeopardize their health. Congress should swiftly pass a law that mandates the option of early voting by mail in all 50 states and the District of Columbia.”

Tierney Sneed, writing for Talking Points Memo on April 14, said the following about the challenges involved with expanding absentee/mail-in voting:

“Only a handful of the states have the infrastructure already in place to handle the expansion of mail-in voting the coronavirus is expected to bring about. For the rest of the country, election officials will have to work aggressively to overhaul their voting procedures so that, for public health reasons, in-person interactions can be limited. In a vast majority of states, officials will have to consider buying new equipment, retraining or hiring additional staff, revamping the current way they handle absentee ballots, and changing procedural deadlines — which in some places require the cooperation of the legislature. Experts anticipate bumps in the road — if not major hurdles — everywhere. Whether other states repeat last week’s primary fiasco in Wisconsin will depend on how proactive policy makers are in reconfiguring their systems and what level of absentee voting they will be starting from.”

Since our April 8 edition, the following states have postponed upcoming elections: 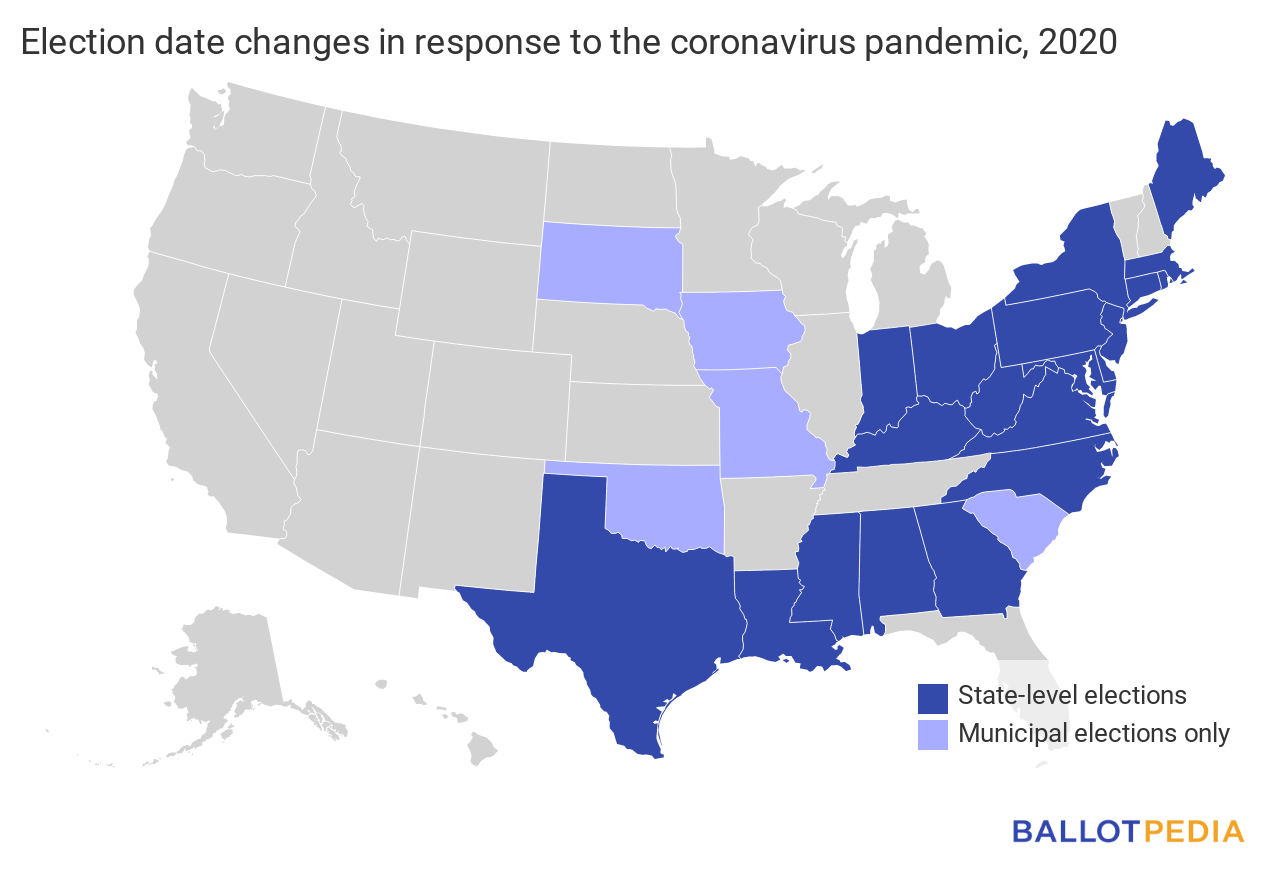 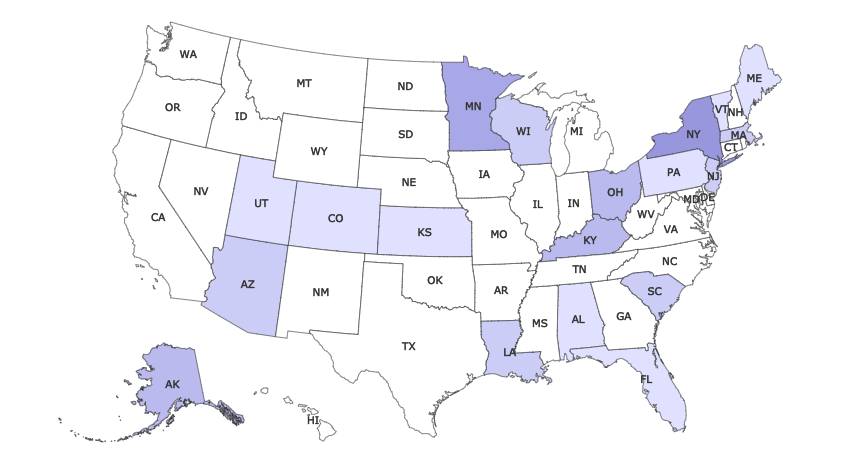 In our May 6 issue, we will examine the modifications states are making to candidate filing procedures in response to the COVID-19 outbreak.