The COVID-19 outbreak in the United States has prompted election postponements, alterations to absentee/mail-in voting procedures, and modifications to candidate filing protocols. It has also resulted in at least 90 lawsuits filed in state and federal courts touching on various aspects of election administration. These lawsuits span 32 different states.

In this edition of The Ballot Bulletin, we take a closer look at five of what we think are the most noteworthy lawsuits filed to date. We selected these lawsuits because they deal with a variety of election-related issues and originate in different regions of the country. For a complete list of all the election lawsuits we’re tracking, click here.

The issue: Attorneys for the plaintiffs argued that Whitmer’s stay-at-home order, which disallowed large gatherings and closed numerous businesses, prevented them from collecting the number of signatures needed to earn a place on the ballot. They argued that these conditions imposed a severe burden on the plaintiffs’ ability to seek elective office, violating their constitutional free-speech and associational rights.

The outcome: On April 20, Judge Terrence Berg, of the United States District Court for the Eastern District of Michigan, ruled in favor of the plaintiffs and issued an order reducing the petition signature requirements for certain primary candidates to 50 percent of their statutory thresholds. Berg also extended the filing deadline from April 21 to May 8 and directed election officials to develop procedures allowing for the collection and submission of electronic petition signatures. Berg’s order applied only to candidates for offices without a filing-fee option: U.S. Senate, U.S. Congress, and judicial offices. The order did not apply to state legislative candidates, who could pay filing fees to get on the ballot.

Berg’s order was appealed to the United States Court of Appeals for the Sixth Circuit, which ruled on May 5 that Berg had erred in his initial order. Although the appeals court agreed that the original ballot requirements were unconstitutional, it ruled that Berg had exceeded his authority in mandating new requirements. The appeals court directed the state “to select its own adjustments so as to reduce the burden on ballot access, narrow the restrictions to align with its interest, and thereby render the application of the ballot-access provisions constitutional under the circumstances.”

On May 8, state authorities announced they would abide by the requirements laid out in Berg’s original order. Jake Rollow, a spokesman for the Michigan Department of State, said, “As the district court declined to amend its order, and with the revised filing deadline today, May 8, the best course of action to reduce further uncertainty in advance of the rapidly approaching August elections is to maintain the procedures that have been in place for the last two and a half weeks.”

The issue: On May 8, Newsom issued an executive order directing county election officials to deliver mail-in ballots to all registered voters in the Nov. 3 general election. California law allows any eligible voter to vote by mail, but the voter is required to submit a mail-in ballot application first in order to receive an actual ballot. Under Newsom’s order, all voters will automatically receive the mail-in ballots.

On May 21, the plaintiffs filed suit in the United States District Court for the Eastern District of California. In their complaint, attorneys for the plaintiffs allege that Newsom’s order violates both the Elections Clause and the Electors Clause of the United States Constitution. The Elections Clause (Article I, Section 4) establishes that “the Times, Places and Manner of holding Elections for Senators and Representatives, shall be prescribed in each State by the Legislature thereof; but the Congress may at any time by Law make or alter such Regulations, except as to the Places of chusing Senators.” The Electors Clause (Article II, Section 1) establishes that each state may appoint presidential electors “in such Manner as the Legislature thereof may direct.” Attorneys for the plaintiffs argue that neither Newsom nor Padilla meet the definition of a “Legislature” for the purposes of these provisions.

The outcome: The case is pending before Judge Morrison England, who was appointed to the court by President George W. Bush (R).

The parties to the suit: The plaintiffs were the League of Women Voters of Oklahoma and two qualified Oklahoma voters, Angela Zea Patrick and Peggy Jeanne Winton. The defendant was Paul Ziriax, in his capacity as secretary of the Oklahoma State Election Board.

The issue: Attorneys for the plaintiffs alleged that official absentee ballot forms and other instructional materials were misleading voters by suggesting that a notarized affidavit was required in order for absentee ballots to be counted. The plaintiffs argued instead that a personally signed statement, under penalty of perjury, was sufficient in lieu of a notarized affidavit.

The outcome: On May 4, the Oklahoma Supreme Court ruled 6-3 in favor of the plaintiffs, striking down the contested requirement. The court ruled that the requirement did not qualify as an exception under a state law establishing that statements, signed and dated under the penalty of perjury, carry the force of an affidavit.

However, on May 7, Gov. Kevin Stitt (R) signed SB210 into law, reinstating the absentee ballot notarization requirement. The legislation also included provisions applicable only to the 2020 election cycle. SB210 permitted voters to submit copies of their identification in lieu of fulfilling the notarization requirement in the event of a state of emergency occurring within 45 days of an election. The legislation also specified that individuals experiencing symptoms indicative of COVID-19, and individuals classified as vulnerable to infection could cast absentee ballots under the ‘physical incapacitation’ eligibility criterion.

The parties to the suit: The plaintiff was the Wisconsin Legislature, in which Republicans have majorities in both chambers. The defendant was Gov. Tony Evers, a Democrat.

The issue: On April 6, Evers issued an executive order postponing in-person voting in the spring election, scheduled to take place on April 7, to June 9. Evers also extended the receipt deadline for absentee ballots to June 9.

State Senate Majority Leader Scott Fitzgerald (R) and Assembly Speaker Robin Vos (R) argued that Evers’ order exceeded his constitutional authority. They filed suit in the state supreme court, seeking an emergency stay of Evers’ order. In their motion for the stay, plaintiffs’ attorneys said, “Given that the Governor’s order comes mere hours before the in-person election is set to begin, the Legislature will suffer irreparable harm if Executive Order 74 is not immediately enjoined. Moreover, such sweeping changes to an election made just before the election is set to begin will undoubtedly cause voter confusion and call into question the integrity of the electoral process.”

The outcome: On April 6, the state supreme court voted 4-2 to stay Evers’ order, allowing the election to proceed as scheduled. Justices Annette Ziegler, Rebecca Bradley, Patience Roggensack, and Brian Hagedorn formed the majority. Justices Ann Walsh Bradley and Rebecca Dallet dissented. Justice Daniel Kelly, who ran for re-election on April 7, did not participate in the decision.

In an unsigned opinion, the court majority wrote, “The question presented is not whether the policy choice to continue with this election is good or bad, or otherwise in the public interest. … Rather, the question presented to this court is whether the Governor has the authority to suspend or rewrite state election laws. Although we recognize the extreme seriousness of the pandemic that this state is currently facing, we conclude that he does not.”

Bradley wrote the following in her dissent, which Dallet joined: “[The] majority gives Wisconsinites an untenable choice: endanger your safety and potentially your life by voting or give up your right to vote by heeding the recent and urgent warnings about the fast growing pandemic. These orders are but another example of this court’s unmitigated support of efforts to disenfranchise voters.”

The parties to the suit: The plaintiffs were Andrew Yang, a former candidate for the Democratic presidential nomination, and several candidates for New York’s delegation to the Democratic National Convention. The defendants were Robert Brehm, Douglas Kellner, Peter Kosinski, Andrew Spano, and Todd Valentine, all members of the New York State Board of Elections, and Gov. Andrew Cuomo (D).

The issue: On April 27, the New York State Board of Elections moved to cancel the Democratic presidential preference primary, which had been scheduled to take place on June 23. The Republican presidential preference primary had already been canceled. The statewide primary election was scheduled to proceed as planned on June 23. Earlier in April, the state enacted a law authorizing the board of elections to remove candidates’ names from the ballot upon the suspension or termination of their campaigns. Sen. Bernie Sanders (I) suspended his presidential campaign on April 8, making former Vice-President Joe Biden (D) the presumptive Democratic nominee.

In their complaint, filed April 28, attorneys for the plaintiffs alleged that “this unprecedented and unwarranted move infringes the rights of Plaintiffs and all New York State Democratic Party voters … as it fundamentally denies them the right to choose our next candidate for the office of President of the United States.”

The outcome: On May 5, Judge Analisa Torres, of the United States District Court for the Southern District of New York, ordered the New York State Board of Elections to reinstate the Democratic presidential primary. Torres wrote, “[T]he removal of presidential candidates from the primary ballot not only deprived those candidates of the chance to garner votes for the Democratic Party’s nomination, but also deprived their pledged delegates of the opportunity to run for a position where they could influence the party platform, vote on party governance issues, pressure the eventual nominee on matters of personnel or policy, and react to unexpected developments at the Convention.” Torres joined the court in 2013, having been nominated by President Barack Obama (D).

On May 6, the state board of elections appealed the decision. On May 19, a three-judge panel of the United States Court of Appeals for the Second Circuit affirmed Torres’ ruling. The panel comprised Judges Amalya Kearse, Dennis Jacobs, and Jose Cabranes. Kearse, Jacobs, and Cabranes were appointed to the court by Presidents Jimmy Carter (D), George H.W. Bush (R), and Bill Clinton (D), respectively. The state board of elections indicated it would make no further appeal.

Since our May 20 edition, we’ve tracked the following election postponement updates:

To date, 20 states and one territory have postponed upcoming state-level elections. These states are shaded in dark blue on the map below. 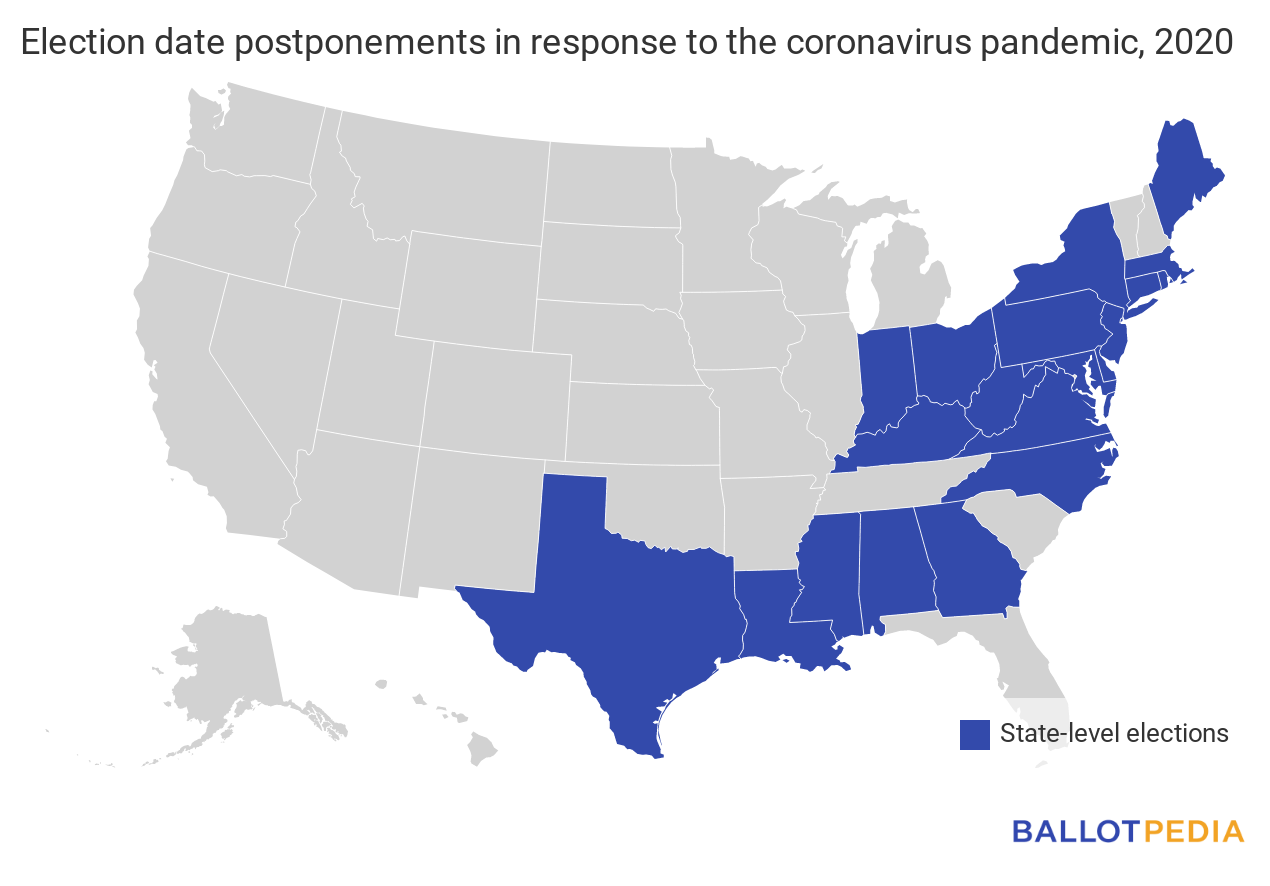 Since our May 20 edition, we’ve tracked the following absentee/mail-in voting modifications:

To date, 28 states have modified their absentee/mail-in voting procedures. These modifications can be divided into five broad categories: 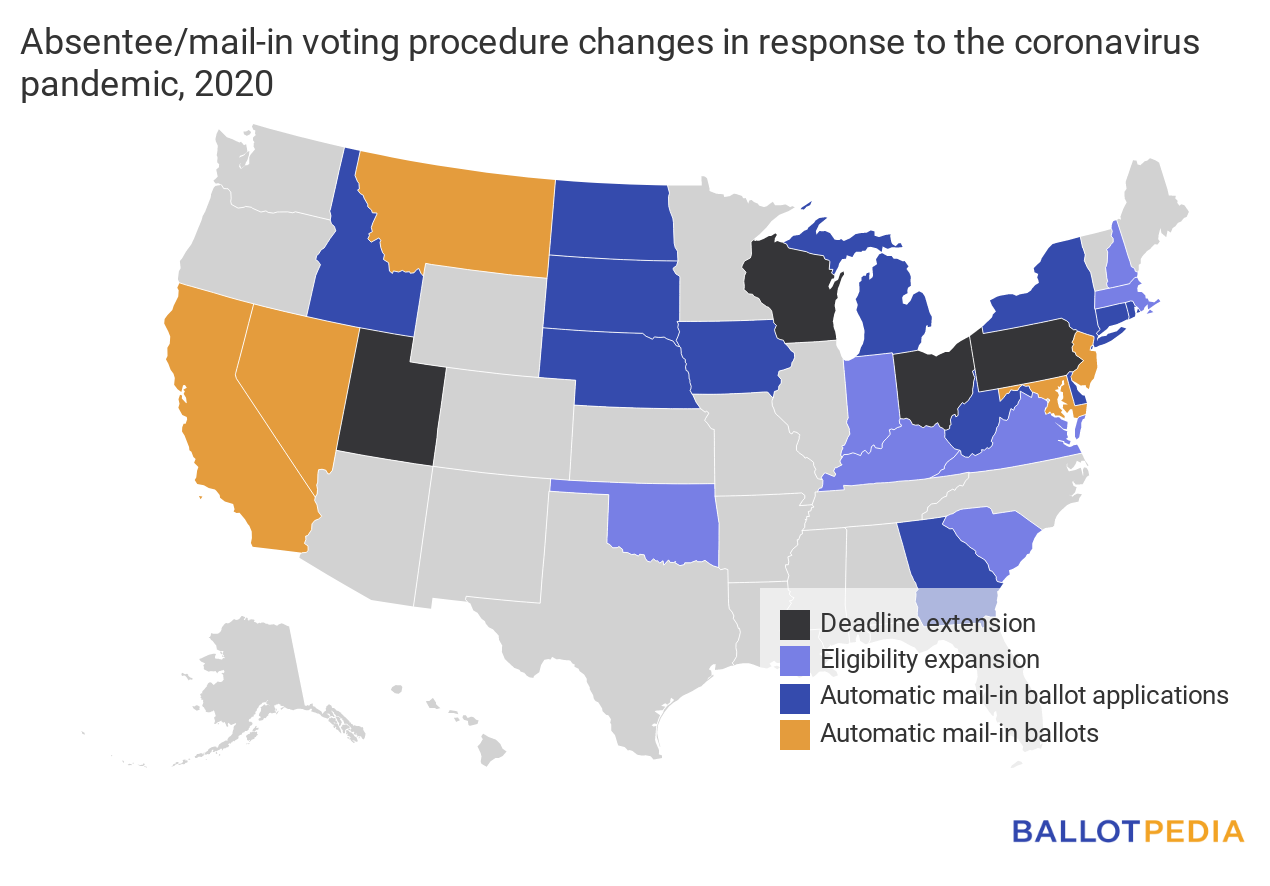 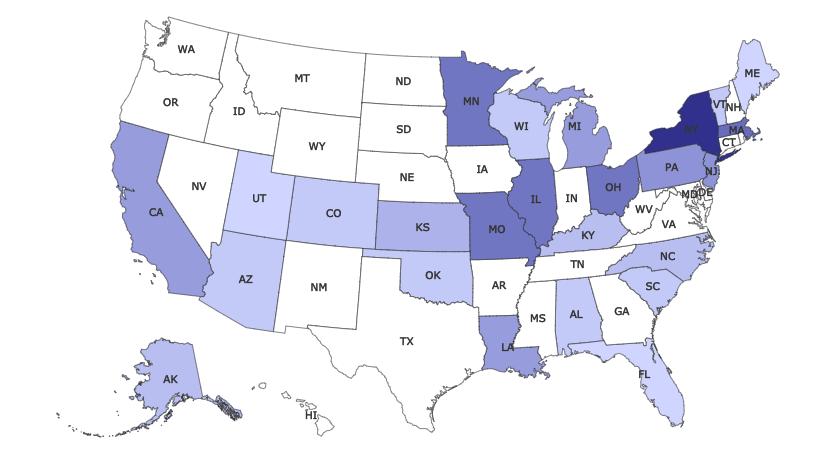 On June 2, Ballotpedia covered 1,990 primary elections for 1,011 offices across 12 states and Washington, D.C. In our June 17 issue, we’ll examine the effects of the COVID-19 outbreak on the conduct of these elections, turning our attention to the use of absentee/mail-in voting, consolidation of polling places, and preliminary data on voter turnout rates.