On June 25 and June 26, the Supreme Court of the United States declined to intervene in two lawsuits involving COVID-19 and election administration. The first was a suit out of Ohio involving remote signature gathering for ballot initiatives. The second was a suit out of Texas dealing with absentee voting eligibility.

On April 27, three registered Ohio voters and ballot initiative petition circulators (Chad Thompson, William Schmitt, and Don Keeney) filed suit against the state in federal district court, alleging that Ohio’s in-person signature collection and witnessing requirements for ballot measures were unconstitutional in light of the COVID-19 outbreak. The plaintiffs petitioned the court either to direct state officials to place the initiatives on the ballot directly or suspend prohibitions against remote signature collection and extend filing deadlines.

On May 19, Judge Edmund Sargus issued an order directing state officials to suspend enforcement of in-person signature requirements and extend filing deadlines for the initiative campaigns involved in the suit. Sargus wrote, “[This] court finds that in these unique historical circumstances of a global pandemic and the impact of Ohio’s stay-at-home orders, the state’s strict enforcement of the signature requirements for local initiatives and constitutional amendments severely burden plaintiffs’ First Amendment rights as applied here.”

On May 21, Ohio Attorney General Dave Yost (R) appealed that decision to the United States Court of Appeals for the Sixth Circuit. On May 26, a three-judge appellate panel, composed of Judges Jeffrey Sutton, David McKeague, and John Nalbandian, stayed the district court’s decision. In a per curiam opinion, the court wrote:

The plaintiffs appealed the appellate panel’s decision to the U.S. Supreme Court. On June 25, Associate Justice Sonia Sotomayor, who fields such requests for the Sixth Circuit, referred the matter to the full court, which declined to vacate the stay without noted dissent.

On May 19, Judge Samuel Biery, of the United States District Court for the Western District of Texas, ordered that all eligible Texas voters be allowed to cast absentee ballots in order to avoid transmission of COVID-19. In his opinion, Biery wrote, “The Texas Election Code allows citizens over 65 without a disability to vote by mail. Thus, the Texas vote-by-mail statute provides for the health safety of mail ballots for those 65 years of age and older but not those 64, 364 days and younger. The court finds no rational basis for such distinction and concludes the statute also violates the clear text of the Twenty-Sixth Amendment under a strict scrutiny analysis.” Biery also construed lack of immunity to, and fear and anxiety over, COVID-19 as disabilities within the context of the state election code and the state’s absentee voting eligibility criteria.

On June 16, the Democratic Party of Texas appealed the decision to the Supreme Court, asking that the court lift the appellate panel’s stay and set an expedited briefing schedule for consideration of the case. Justice Samuel Alito, who fields such requests for the Fifth Circuit, referred the matter to the full court, which declined to vacate the stay without noted dissent. Associate Justice Sonia Sotomayor issued a statement: “This application raises weighty but seemingly novel questions regarding the Twenty-Sixth Amendment. I do not disagree with the decision to refrain from addressing them for the first time here, in the context of an emergency application to vacate a stay of an injunction. But I hope that the Court of Appeals will consider the merits of the legal issues in this case well in advance of the November election.” The case now returns to the Fifth Circuit for further proceedings.

To date, 35 states have modified their absentee/mail-in voting procedures. These modifications can be divided into five broad categories:

To date, we have tracked 118 lawsuits and/or court orders involving election policy issues and the COVID-19 outbreak. In each issue of The Ballot Bulletin, we shine a spotlight on what we consider one of the more interesting recent events in this area. Click here to view the complete list of lawsuits and court orders.

This week, we turn our attention to a case out of Alabama, People First of Alabama v. Merrill. 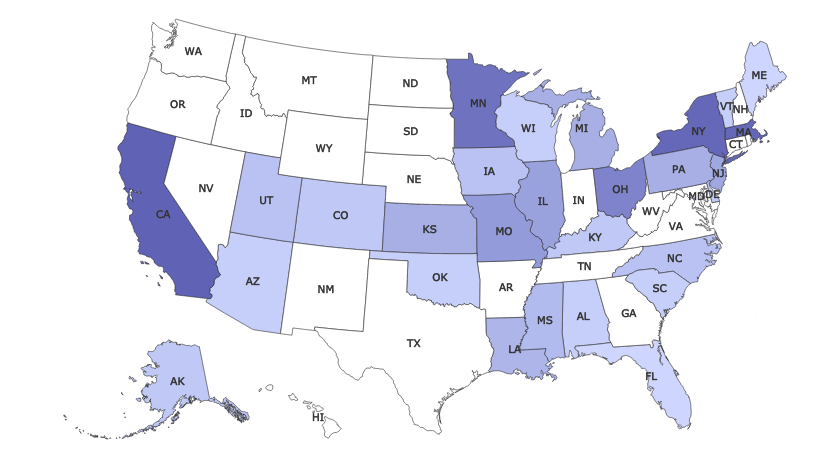