The U.S. Supreme Court has unofficially ended its 2019-2020 term and is now in recess until the start of the 2020-2021 term on October 5. Delays from the coronavirus pandemic caused the court to release opinions until July 9, the first time the court had issued opinions into July since 1996. The July 9 date set a record for the latest date the court has issued regular opinions since 1960. Before this year, the latest date for issuing opinions in that span was July 7, 1986.

The court issued 53 signed opinions, in which the authorship is indicated, this term. Justices Roberts and Gorsuch wrote the most opinions with seven each. Justices Thomas, Breyer, and Sotomayor wrote the least, with five opinions each. Compared to the previous term, Justices Roberts and Ginsburg wrote the same number of opinions. Justices Thomas, Breyer, Alito, Sotomayor, Kagan, Gorsuch, and Kavanaugh all wrote more opinions last term than this term. Several of this term’s cases were postponed to the upcoming term due to the coronavirus pandemic.

The court issued 13 5-4 or 5-3 decisions, 21% of the total opinions released this term. Those decisions were made by four different configurations of justices. Across these decisions, 69% had a majority made up of Chief Justice Roberts and Justices Thomas, Alito, Gorsuch, and Kavanaugh. The rest had a majority made up of Justices Ginsburg, Breyer, Sotomayor, and Kagan with one conservative justice.

SCOTUS issued opinions in 69 cases this term. It reversed 46 lower court decisions (66.7%) and affirmed 23. This term’s reversal rate was 3.4 percentage points lower than the average rate of reversal since 2007 (70.1%). The SCOTUS reversal rates are based on SCOTUSblog’s Circuit Scorecard, which treats opinions released in certain consolidated cases as separate decisions to most accurately reflect the court’s impact on lower court rulings. 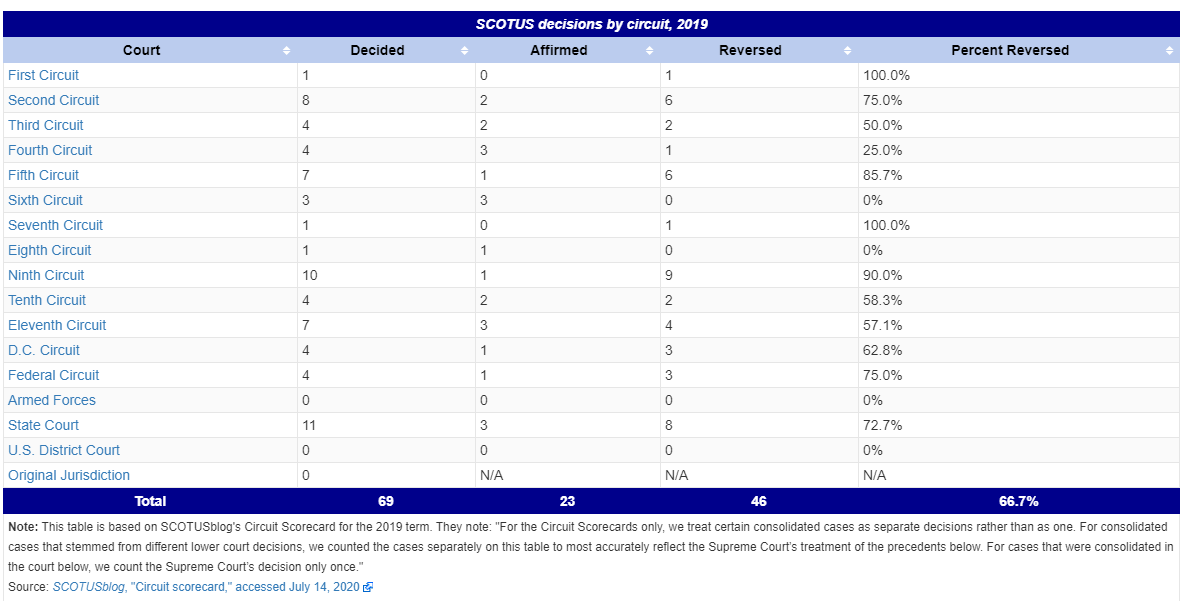