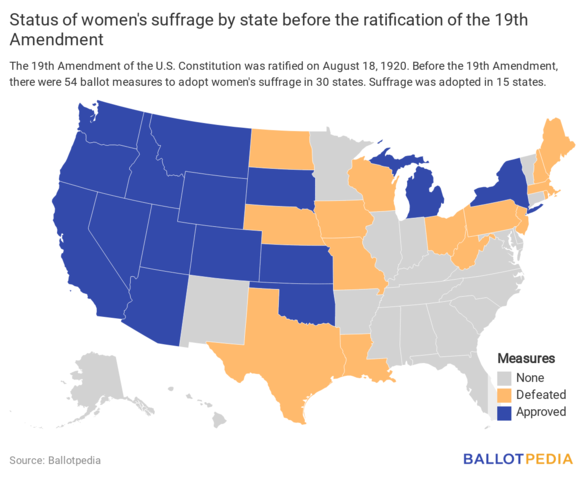 Before the 19th Amendment, the women’s suffrage movement also campaigned for changes to state constitutions to provide women with a right to vote. Suffragists Carrie Chapman Catt and Nettie Rogers Shuler, in their book Woman Suffrage and Politics (1923), wrote that state ballot measures “spun the main thread of suffrage activity” in the movement’s earlier years and were seen as stepping stones to national suffrage. “I don’t know the exact number of States we shall have to have,” said Susan B. Anthony, “but I do know that there will come a day when that number will automatically and resistlessly act on the Congress of the United States to compel the submission of a federal suffrage amendment.” When asked about federal support for women’s suffrage in 1908, President Theodore Roosevelt told the suffrage movement to “Go, get another State.”

Until 1869, the American Equal Rights Association (AERA) was the leading suffragist organization in the United States. AERA dissolved due to disagreements over strategies and the 15th Amendment, which addressed race, but not gender, and the right to vote. From AERA came the American Woman Suffrage Association (AWSA), which aimed to win suffrage for women on a state-by-state basis, and the National Woman Suffrage Association (NWSA), which aimed to achieve suffrage through an amendment to the U.S. Constitution. AWSA and NWSA reconsolidated in 1890, with the new organization focused on both state referendums and a federal amendment for women’s suffrage.

In 1893, Colorado became the first state to pass a standalone constitutional amendment on women’s suffrage. The male electorate approved the amendment 55% to 45%.

Utah (1895) and Idaho (1896) followed Colorado, with voters in both states passing ballot measures that addressed women’s right to vote. Between 1896 and 1910, the movement lost at the ballot box on 10 occasions.

Victories accumulated west of the Great Plains. Washington (1910), California (1911), Arizona (1912), Oregon (1912), Montana (1914), and Nevada (1914) passed constitutional amendments. In Arizona, the male electorate voted 68% to 32%, which was the largest margin to approve a women’s suffrage amendment. In 1917, Montana elected the first woman to Congress—Jeannette Rankin, who was president of the Montana Women’s Suffrage Association and an organizer for the ballot measure campaigns in Washington and Montana.

Most of the states that provided women with the right to vote before the 19th Amendment did not do so on their first attempts. Nine of the 15 states voted on women’s suffrage more than once before passing an amendment. Voters in Oregon and South Dakota even voted on the issue six times.

According to the National Women’s History Museum, the beginning of the U.S. women’s suffrage movement is dated as 1848. At the 1848 Seneca Falls Convention, which was the first women’s rights convention in the United States, organizers declared that men and women are created equal and, therefore, have the same civic rights and privileges, including “the inalienable right to the elective franchise.” The women’s suffrage movement era concluded 72 years later in 1920.