Welcome to the Thursday, Oct. 22, Brew. Here’s what’s in store for you as you start your day:

In this week’s feature comparing the four noteworthy presidential candidates’ stances on key issues, we’re looking at what the candidates say about gun regulation. As a reminder, to be considered noteworthy in the general election, candidates must appear on enough ballots to win a majority of the Electoral College.

In the past few weeks, we’ve also briefed our Brew readers on the candidates’ stances on climate change, criminal justice, abortion, China, and DACA and Dreamers.

Howie Hawkins’ campaign website lists some of the following gun regulation policies: “Ban and buy back military assault weapons, high-capacity magazines, and bump stocks. Universal background checks for gun and ammunition buyers, including closing the loophole for private sales and sales at gun shows, with sales and background check records maintained indefinitely in a central registry. Require all gun owners to pass a gun safety test, a visual test, and be licensed by a government agency, similar to the requirements for obtaining a driver’s license. Institute a 28-day waiting period after license application before firearms can be possessed. Expand the prohibition on the purchase and possession of guns by people convicted of misdemeanor domestic violence crimes to include people convicted of menacing, assault, or unlawful imprisonment.”

Jo Jorgensen’s answers to a series of questions regarding gun regulation are summarized below. Click here to view the full questionnaire.

Jorgensen’s campaign website states she opposes additional restrictions on the process of purchasing a gun. She also opposes allowing victims of gun violence to sue firearms dealers and manufacturers.

Donald Trump’s campaign website states, “The Second Amendment to our Constitution is clear. The right of the people to keep and bear Arms shall not be infringed upon. Gun and magazine bans are a total failure. The right of self-defense doesn’t stop at the end of your driveway. That’s why I have a concealed carry permit and why tens of millions of Americans do too. That permit should be valid in all 50 states.”

Help Desk preview: How and when are election results finalized?

On Tuesday, we talked about the life cycle of an election ballot in an excerpt from Ballotpedia’s 2020 Election Help Desk. We launched the newsletter two weeks ago to bring you the answers you need to vote.

Today, let’s talk about how and when election results will be certified in the 2020 election.

Election results are finalized through processes called canvassing and certification. Canvassing generally refers to the process by which state and local election officials count and confirm the validity of ballots cast in an election. Certification is the process by which state authorities formalize the outcome of an election based on the results of the canvass. Although state laws treat these two processes separately, some states, localities, and commentators use the terms interchangeably to describe the entire process of counting ballots and formalizing results.

Click the link below to learn more about each stage, and click here to subscribe to the Help Desk and receive that newsletter in your inbox this afternoon.

Today’s election previews feature Hawaii and Tennessee. Here are the states we’ve highlighted so far, along with a map below summarizing where we are in the series: 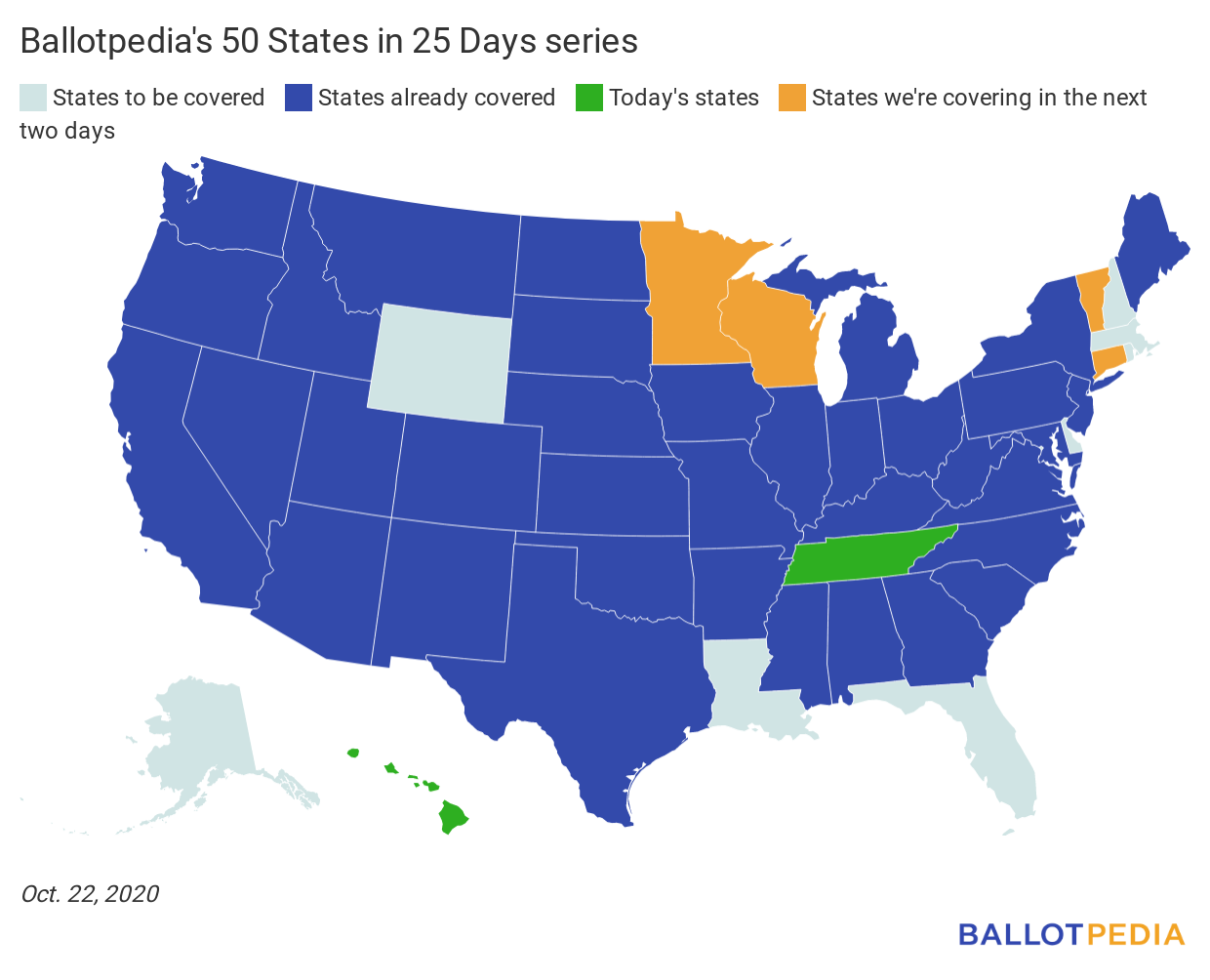 On the ballot in Hawaii

At the federal level, Hawaii voters will elect four presidential electors and two U.S. Representatives. At the state level, three seats are up for election for the Office of Hawaiian Affairs, 14 out of 25 seats are up in the state Senate (13 in regular elections and one in a special election), and all 51 state House districts. Ballotpedia is tracking local elections taking place in Honolulu.

On the ballot in Tennessee

At the federal level, Tennessee voters will elect 11 presidential electors, one U.S. Senator, and nine U.S. Representatives. Both chambers of the state legislature are on the ballot, with 16 out of 33 seats up in the state Senate and all 99 state House districts.