Welcome to the Friday, October 23, Brew. Here’s what’s in store for you as you start your day:

Introducing a new way to explore our candidate survey responses

Political junkies, prepare to take a trip down the rabbit hole of political survey replies.

We’ve developed a new page the truly devoted can use to go way off the map—enabling you to explore candidates, issues, personalities, and more in a new, different, exciting way.

The tool is called Candidate Questions, and with it you can view a sampling of 50 randomized answers to each of the 16 questions in our Candidate Connection survey. This way, you can browse what candidates are saying about topics that interest you and click on each candidate’s full response to read more.

For example, do you want to see what our respondents said was their favorite book? Using this, you can read answers to just that question. Want a cross-section of those issues candidates identify as their policy priorities? You can do that, too.

You can quickly and easily flip through the more than 4,500 candidate survey replies we’ve received this cycle, question-by-question, like you were looking through a book or magazine. We think it’s the most comprehensive catalog of its kind—and just the thing for people that love politics.

Ready to dive in? Click the link below and get started!

If I didn’t grab your attention above about candidate surveys, perhaps this section will pique your curiosity. Each Friday, we’ve been including selected responses we’ve received this cycle to questions from our Candidate Connection survey, which we invite all candidates with a profile on Ballotpedia to complete.

This week’s question is: What do you believe are the core responsibilities for someone elected to this office? We received 1,903 responses so far, and here are some selected ones:

“According to the constitution, the most important job of the legislature is to pass the yearly budget. Nothing else happens without that. But aside from that, the job of the legislature needs to be to set the ground rules and create structures to hold people accountable so that the private sector can thrive and drive our state forward.”

-Robert Myers Jr., Republican candidate for District B of the Alaska State Senate

“I believe the core responsibilities for someone elected to this office is for the person to listen to each and every constituent across the district regardless of political affiliation. After hearing the information, research the problem and solution and begin to hear others opinions on the concern. If this is deemed an issue by a majority of the constituents, the official should fight for what the people are asking for. The official’s responsibility is to fight for the people and be their voice at the statehouse.”

-Jermaine Johnson, Democratic candidate for District 80 of the South Carolina House of Representatives

“The Nevada Supreme Court hears and decides appeals involving every area of law that touches the lives of Nevadans – criminal, civil, family, employment, administrative, constitutional, environmental and water law. The appellate issues are processed through the evidentiary and procedural rules that control jury and bench trials and motion practice in district court. A justice’s core responsibility is to know and apply the law competently and fairly.”

If you know of a candidate who hasn’t yet responded to our survey, send them this link and ask them to complete it. We’ll include their responses on their profile so we can all learn more about them.

We’re finishing up our fourth week of election previews with a look at Vermont and Wisconsin. (Why am I suddenly craving dairy products?) There are just 10 states remaining in our 50 States in 25 Days series, which will conclude next week. If you missed a day, here are the states we’ve highlighted so far, along with a map summarizing where we are in the series: 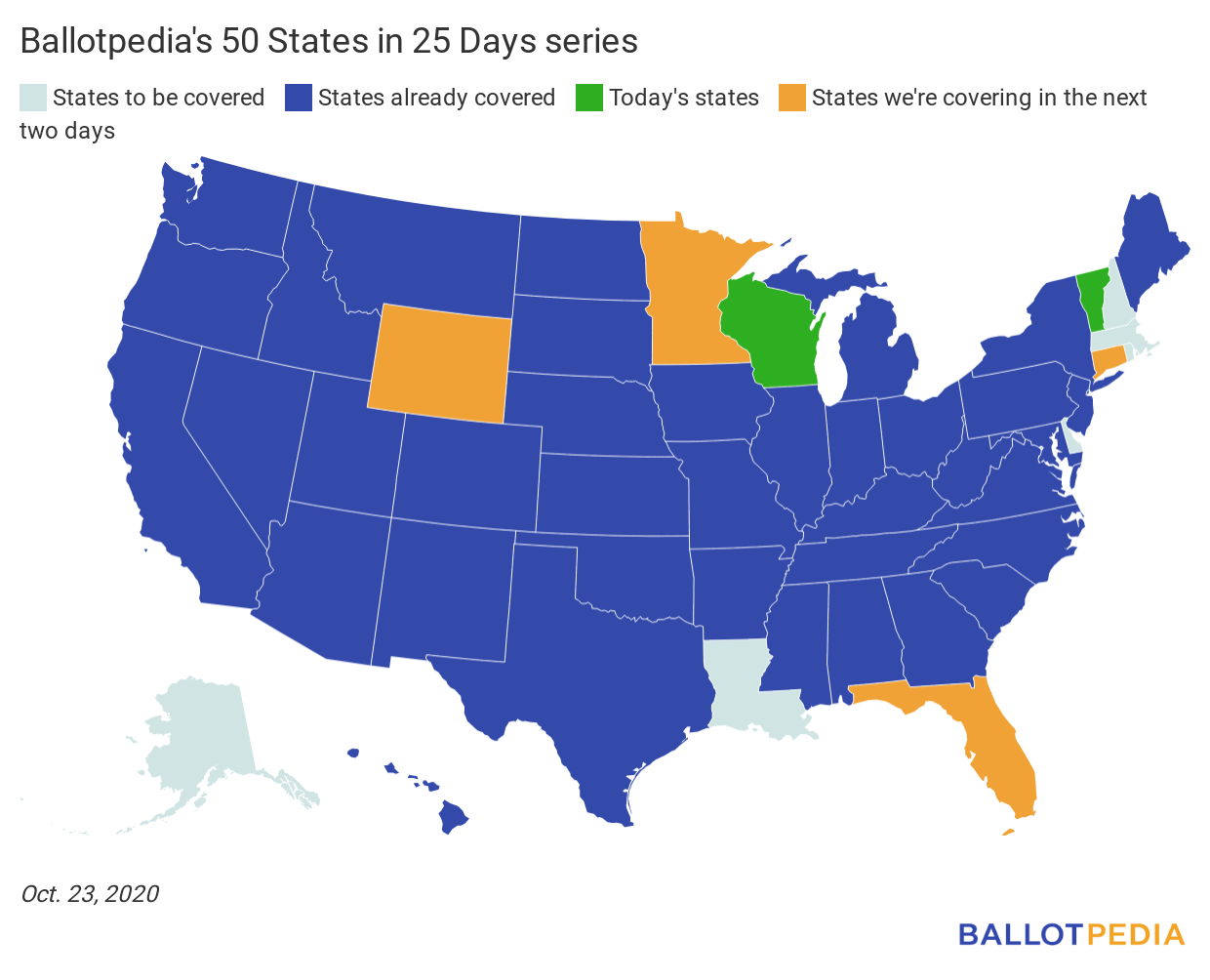 On the ballot in Vermont

At the federal level, Vermont voters will elect three presidential electors and one U.S. Representative. At the state level, the offices of governor, lieutenant governor, secretary of state, auditor, attorney general, and treasurer are up for election, along with 30 state Senate seats and 150 state House districts.

There is one battleground election in Vermont in 2020:

On the ballot in Wisconsin

At the federal level, Wisconsin voters will elect 10 presidential electors and eight U.S. Representatives. At the state level, 16 state Senate seats and 99 state House districts are up for election. Ballotpedia is tracking local elections taking place in Dane County and Milwaukee County as well as local ballot measures in the Madison Metropolitan School District.