Welcome to the Thursday, March 4, Brew. Here’s what’s in store for you as you start your day:

You may have been surprised to see that I’m reporting vote totals instead of percentages. This is because the vote percentages in this race require a bit of explanation. St. Louis conducted the primary using approval voting, where voters can choose any number of candidates to vote for. In the mayoral primary, voters cast 69,607 total votes across 44,538 ballots. In other words, 44,538 people voted in the election, with some voters selecting multiple candidates on their ballots. That’s an average of 1.56 votes per ballot.

According to The Center for Election Science, a group that supports approval voting, St. Louis is one of two U.S. cities—along with Fargo, North Dakota—that uses this method. The city implemented the method after voters passed Proposition D in November 2020. Voters in Fargo passed Measure 1 in 2018 to implement approval voting and had their first election with the system in 2020. FiveThirtyEight reported that Fargo voters cast an average 2.28 votes per ballot in the June 2020 city commissioner election— 42,855 votes across 18,805 ballots.

Mayor Lyda Krewson (D) did not run for re-election. Both Tishaura Jones and Spencer are affiliated with the Democratic Party. The last 10 mayors of St. Louis have all been Democrats. Aloys Kaufmann, the last Republican mayor, held office from 1943 to 1949.

President Joe Biden (D) withdrew the nomination of Neera Tanden for director of the Office of Management and Budget (OMB) on Tuesday. Tanden requested that Biden withdraw her nomination after several senators, including Joe Manchin (D-W.V.), said they would vote against confirming her. This is the first failed nomination of Biden’s administration.

In Tanden’s letter to Biden, she said, “Unfortunately, it now seems clear that there is no path forward to gain confirmation, and I do not want continued consideration of my nomination to be a distraction from your other priorities.”

The White House has not yet named a new nominee, although several individuals are reportedly in consideration.

The Senate has confirmed 13 of Biden’s 23 Cabinet nominees.

Here are the numbers of Cabinet nominees the last four presidents have withdrawn:

The table below shows where Biden’s Cabinet nominees are in the process. 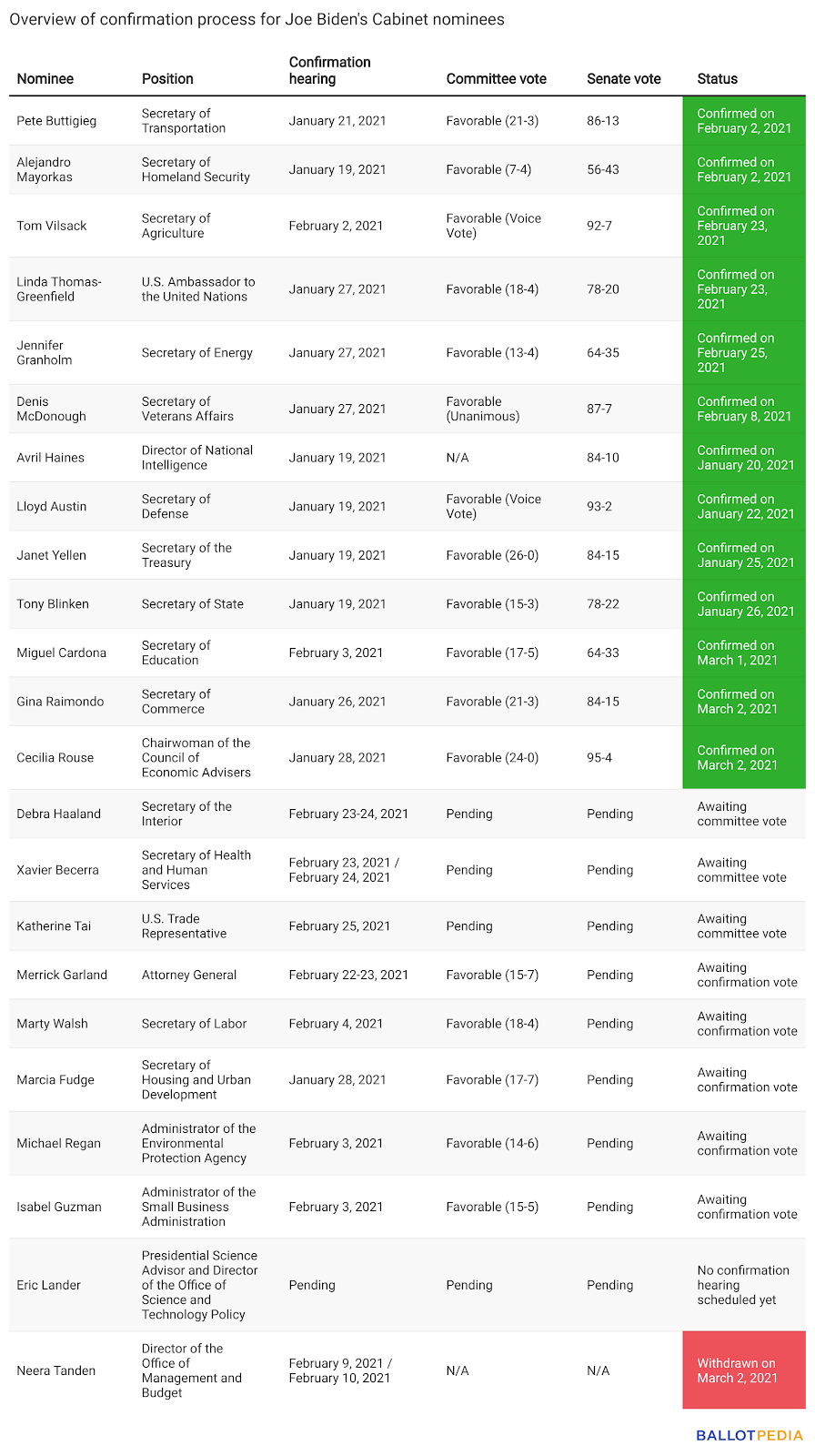 Recap of other election results from Tuesday

We followed a number of state and local elections on March 2, including Burlington, Vermont’s ranked-choice voting question and Rhode Island’s seven bond issues. Here’s a summary of those results.

Voters in Burlington, Vermont, approved Question 4, 64% to 36%. Question 4 will implement ranked-choice voting (RCV) for city council elections beginning in March of 2022—pending approval by the Vermont General Assembly and signature from the governor.

In 2005, Burlington voters amended the city’s charter to implement RCV for mayoral elections. After using the method in 2006 and 2009, voters repealed RCV in 2010 by a vote of 52% to 48%. This measure applies RCV for city council elections only.

In Rhode Island, the legislature must ask voters to issue general obligation bonds over $50,000, except in the case of war, insurrection, or invasion. Between 2008 and 2020, voters in Rhode Island had approved all 22 bond measures, totaling $1.3 billion in principal value. The last odd-year bond election in Rhode Island was in 1985, where nine bond measures were approved.