Welcome to the Tuesday, April 13, Brew. Here’s what’s in store for you as you start your day:

Naturally, we thought we’d be writing a lot more about redistricting by this point in the year. Census delays have caused downstream adjustments to the timelines for each state.

As we’ve discussed multiple times here in the Brew, population data from the decennial census is used to determine the number of congressional seats each state will have in the coming decade (which is known as apportionment). States also use this data for redistricting. The coronavirus pandemic delayed the collection and distribution of the data.

The Bureau plans to deliver congressional apportionment counts to states by April 30—delayed from the original Dec. 31, 2020, due date. The Bureau then plans to deliver the detailed datasets needed for redistricting to states by Sept. 30. The original date for states to receive this data was April 1. On March 15, the U.S. Census Bureau announced redistricting data could be made available to states in a legacy format by mid-to-late August. This legacy format would present the data in raw form, without the data tables and other access tools the Bureau will ultimately prepare for the states.

Some states’ redistricting deadlines come before the Census Bureau’s projected data delivery date, prompting states to consider postponements or alternative data sources. For example, in Oregon, state legislators sued the secretary of state, asking that the court extend the state legislature’s redistricting deadline. Currently, if the legislature doesn’t adopt legislative district maps by July 1, the secretary of state has until Aug. 15 to do so. Secretary of State Shemia Fagan (D) said the legislature should use non-census data to draw maps, subject to revision following census data release. 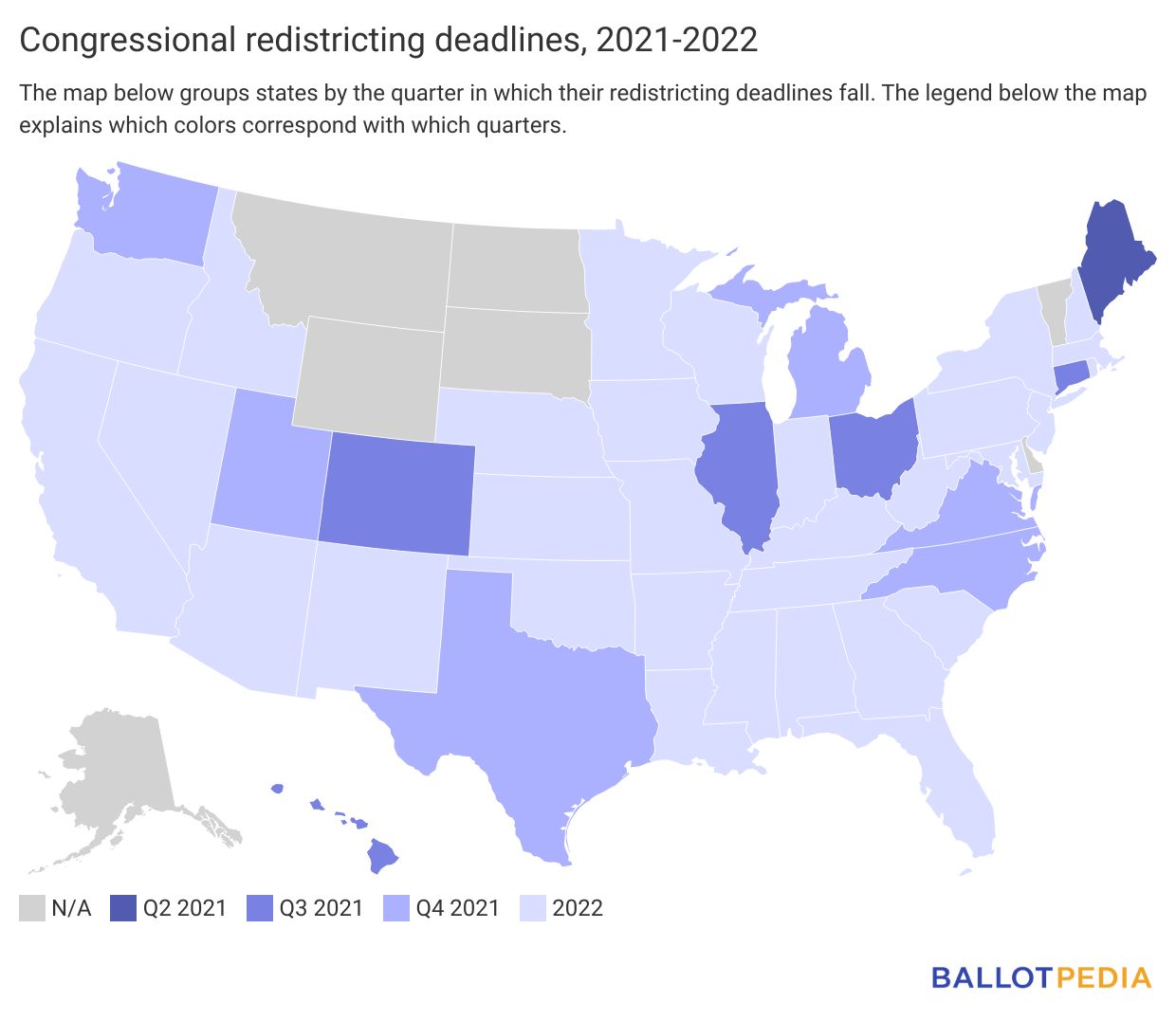 After the 2010 census, Arkansas enacted the first revised congressional district map on April 13, 2011—10 years ago today. Kansas was the last state to adopt such a map, doing so on June 7, 2012.

Following the 2010 census, New Jersey was the first state to enact its state legislative district map on April 3, 2011. Maine was last, on June 3, 2013. (In 2013, the Maine legislature passed a bill changing the redistricting deadline from three years into the decade to one year into it.)

Ballotpedia tracks nominations, confirmations, and vacancies to all Article III federal courts. Currently, there are 69 vacancies out of 870 active Article III judicial positions, which is 7.9% of all such judgeships.

As a refresher, Article III federal judges include judges on the U.S. Supreme Court, U.S. Courts of Appeals, U.S. District Courts, and the Court of International Trade. The president appoints these judges and the Senate confirms them.

President Joe Biden said he will nominate 10 Article III judges (without formally nominating them) so far.

At the start of April 2017—the comparable point in Donald Trump’s presidency—there were 119 Article III vacancies. Trump inherited 108 vacancies at the start of his term. Biden inherited 46.

Sign up for Ballotpedia’s Bold Justice, our newsletter on the federal judiciary, to stay updated on judicial retirements, nominations, noteworthy court rulings, and more.

Thomas Jefferson, the third president of the United States, was born 278 years ago today—on April 13, 1743. Jefferson served as president from 1801 to 1809 and was a member of the Democratic-Republican Party. Here are 278 words about his presidency and life.

Election: Both Jefferson and fellow party member Aaron Burr won 73 electoral votes in 1800. The House of Representatives decided who would become president, with each state having one vote. Jefferson won the election when he received 10 House votes, Burr received four House votes, and two House votes were blank. Burr served as vice president during Jefferson’s first term.

As president: Jefferson was president during the Louisiana Territory purchase in 1803. He supported the Lewis and Clark expedition and organized three additional western expeditions. In 1807, Jefferson passed an embargo banning trade between U.S. ports and foreign nations, and Congress passed the Act Prohibiting Importation of Slaves of 1807. The act did not stop the buying and selling of enslaved people within the United States.

Previous office: Before he was president, Jefferson served as a member of the Second Continental Congress, where he drafted the Declaration of Independence. He also served as vice president after losing to John Adams by three electoral votes in the 1796 presidential election. Jefferson also served as secretary of state, diplomatic minister, governor of Virginia, and a member of the Virginia House of Burgesses and the Virginia House of Delegates.

Book sale: Following his presidency, Jefferson sold his large collection of books to the U.S. government, which became the basis for the Library of Congress.