On Sept. 14, 2021, the United States Court of Appeals for the First Circuit upheld a 2012 Rhode Island donor disclosure law in Gaspee Project v. Mederos. The law requires organizations that spend more than $1,000 per year on independent expenditures or electioneering communications to file a report with the Board of Elections disclosing all donors who contribute more than $1,000. Affected organizations are also required to register with the Board, provide the name and address of the person or group responsible for the expenditure, and list the names of their five largest donors from the previous year. In 2019, two nonprofit organizations challenged the law. The case was dismissed in 2020 before being appealed to the higher court.

On November 21, 2019, two 501(c)(4) groups, the Gaspee Project and the Illinois Opportunity Project, sued the Rhode Island Board of Elections, saying paid political messages were protected speech if they were not coordinated with a specific candidate’s campaign. The organizations said they were “concerned that compelled disclosure of their members and supporters could lead to substantial personal and economic repercussions” including “harassment, career damage, and even death threats for engaging and expressing their views in the public square.”

In August 2020, U.S. District Court Judge Mary McElroy, who was appointed by President Donald Trump (R) in 2018, dismissed the case. McElroy wrote: “The Act’s disclosure and disclaimer requirements are justified by the sufficiently important state interest of an informed electorate and any burdens on political speech that they may cause are substantially related to that state interest. The plaintiffs, therefore, cannot state a plausible claim that the Act is facially violative of First and Fourteenth Amendment rights.” The organizations appealed the case to the United States Court of Appeals for the First Circuit.

The appeal went before circuit judges  Bruce Marshall Selya (appointed by President Ronald Reagan (R)) and David Barron and district judge Pedro A. Delgado Hernández (both appointed by President Barack Obama (D)). The plaintiffs challenged three specific provisions of the law requiring groups to disclose all donors contributing $1, 000 or more, register with the Board and provide the name and address of the person or group paying for advertisements, and list their five largest donors from the previous year. They said the law’s provisions “do not withstand the requisite degree of scrutiny and, in any event, that they infringe constitutionally protected privacy, associational, and free-speech rights.”

The court rejected the plaintiff’s arguments. Writing for the court, Judge Selya said: “ The Act’s disclosure requirements are narrowly tailored enough to avoid any First Amendment infirmity.” Selya also said “we hold that the challenged provisions of the Act bear a substantial relation to a sufficiently important governmental interest and are narrowly tailored enough to withstand exacting scrutiny.”

The plaintiffs said they plan to appeal the ruling to the U.S. Supreme Court. Daniel Suhr, managing attorney at the Liberty Justice Center, said: “Free speech and citizen privacy are fundamental to our democracy. We continue to believe in the strength of our arguments, and we plan to appeal to the Supreme Court to vindicate these foundational constitutional rights.”

Rhode Island Attorney General Peter Neronha said the ruling “is a win for transparency, and accordingly for all Rhode Islanders.” “State campaign and election finance laws exist for a reason: to inform Rhode Islanders of the sources of financial support, directly or indirectly, for candidates for public office,” Neronha said. “Such information is critical to voters evaluating the motivations and positions of those who would hold high office.”

Assistant attorney general Katherine Connolly Sadeck, who represented the state in the case, said it had the potential to influence similar cases. “We’re seeing a number of challenges throughout the country to disclosure type laws in similar contexts. This is an important decision that will probably be referenced in a lot of those cases,” said Sadeck. 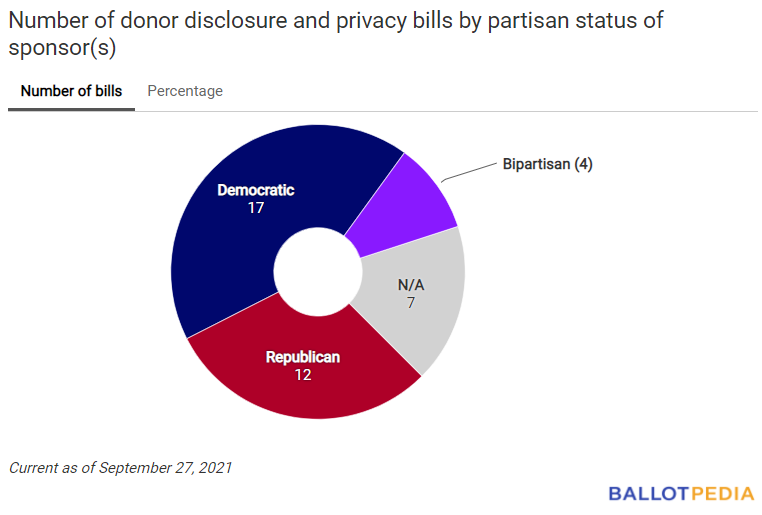 For complete information on all of the bills we are tracking, click here.

Thank you for reading! Let us know what you think! Reply to this email with any feedback or recommendations.