Welcome to the Wednesday, December 22, Brew.

Politico’s Jeremy B. White writes that the new congressional boundaries “create more challenging districts for Republican incumbents without substantially undermining the prospects of vulnerable Democrats. While Democrats are poised to absorb California’s overall loss of a House seat due to declining population, the emerging map could point to Democrats holding ground or picking up seats.”

The CCRC was created by the passage of Proposition 11 in 2008 to draw boundary lines for the state’s legislative districts. In 2010, California voters approved Proposition 20, which gave the commission authority to redraw the state’s congressional district boundaries.

The CCRC is composed of five Democrats, five Republicans, and four people not affiliated with either party.

The state Senate approved the redistricting plan 25-15 on Dec. 10, and the state House of Representatives approved it 44-24 on Dec. 11. Both votes were largely along party lines—all Democrats voted in favor and 38 Republicans and one Democrat voted against. The Santa Fe New Mexican’s Robert Nott writes that the proposal “gives Democrats a comfortable lead in all three congressional districts.”

State Senate Majority Leader Peter Wirth (D) said, “The new congressional map creates districts where we have to work together — rural and urban, north and south, and Democrats, Republicans and independents. That is a good thing.”

The New Mexico Republican Party’s Steve Pearce criticized the map, saying: “these maps are far from fair representation, and they are a disservice to constituents. The real losers are the rural voices of New Mexico, conservative Democrats, Republicans, and independents.”

Incumbents not running for re-election

As of Dec. 21, 2021, 40 members of Congress—six Senators and 34 Representatives—have announced they will not seek re-election. Lucille Roybal-Allard (D-Calif.) announced her retirement from the House on Dec. 21.

Roybal-Allard, who represents California’s 40th Congressional District, said “After thirty years in the House of Representatives, the time has come for me to spend more time with my family. Therefore, I have decided not to seek reelection.” Roybal-Allard was first elected in 1992. She won re-election in 2020 against C. Antonio Delgado (R) 73%-27%.

Of the 40 members not seeking re-election in 2022, 25 members—six senators and 19 representatives—have announced their retirement. Five retiring Senate members are Republicans and one is a Democrat, and of the retiring House members, 14 are Democrats and five are Republicans.

Fifteen of the 40 congressional members not seeking re-election in 2022—all in the House—are running for other offices:

Click the link below to find out more about congressional incumbents who aren’t running for re-election. 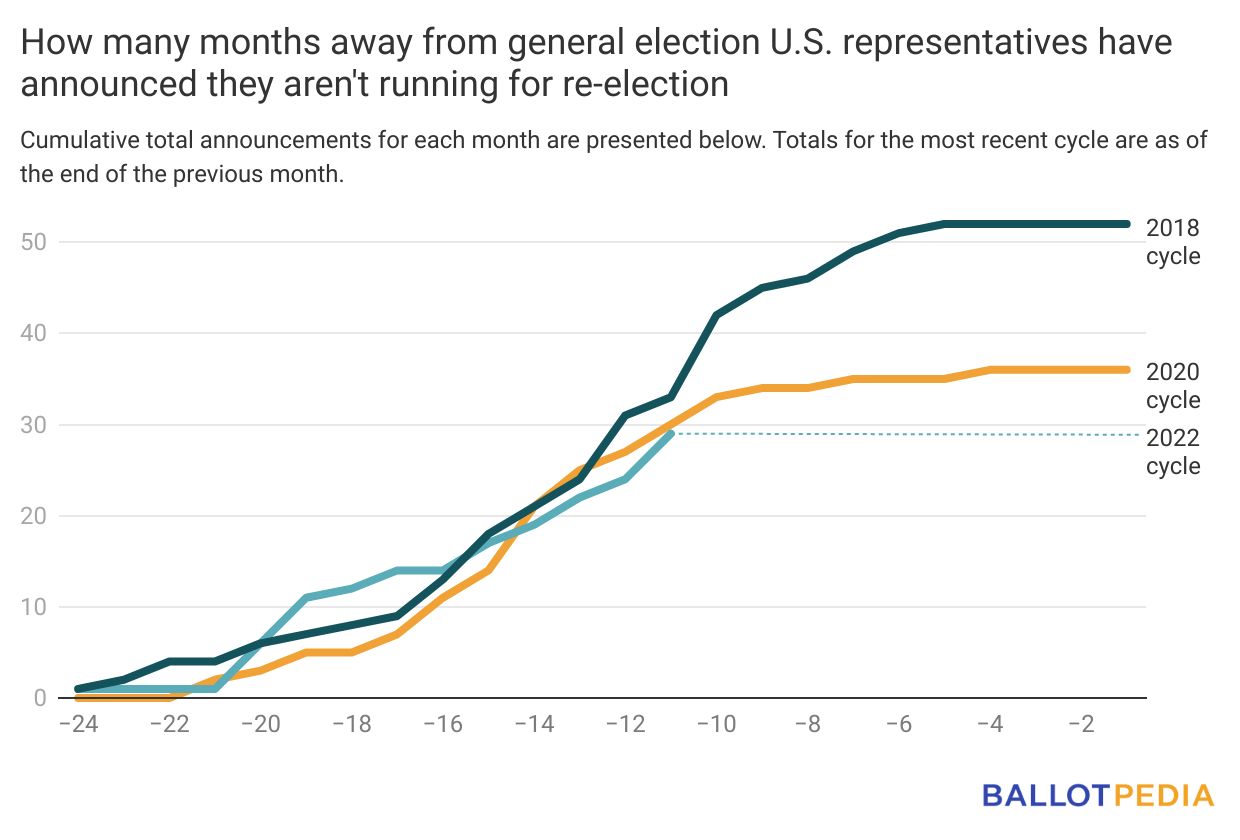 Besides the top races, many voters don’t know who or what is on their ballot, and don’t have an easy way to find out. We’re working to change that. Instead of opening 30 different web pages from 20 different websites to find out what district you’re in, what races are up for election and what a yes vote on that ballot measure would really mean…

We provide all that information you need in one spot: our Sample Ballot Lookup Tool.

There, you can read encyclopedic articles, analyze candidate views, and decide how YOU should vote. We also offer unique ways to learn about your candidates, such as survey questions that help you get to know the person behind the campaign ad.

The sample ballot tool is powered by digital maps. This means you can click through to our articles on each candidate and ballot measure, arming you with the information you need to cast an informed vote at the polls. From presidential races to school board elections—and all the state ballot measures in between—our sample ballot pulls from the tens of thousands of candidates running in the thousands of elections we cover to show you what’s on the ballot for your registered address.

More and more voters are recognizing how powerful this tool is. And it’s popular—more than 21 million people have used our Sample Ballot Lookup Tool to become informed about the candidates and issues they would see at the polls.

When voters use the Sample Ballot Lookup Tool, they depend on the trustworthy and free information Ballotpedia provides to make good choices about the issues and races that most immediately affect their lives.