Welcome to the Wednesday, January 26, Brew.

On Jan. 24, a unanimous three-judge federal court panel blocked Alabama Secretary of State John Merrill (R) from holding the state’s 2022 congressional elections using the redistricting plan the state adopted on Nov. 4, 2021. The panel delayed the filing deadline for U.S. House candidates, moving the date from Jan. 28 to Feb. 11 to give the Legislature time to redraw the map.

A spokesperson for Alabama Attorney General Steve Marshall (R) said, “The Attorney General’s Office strongly disagrees with the court’s decision and will be appealing in the coming days.”

Four sets of plaintiffs challenged Alabama’s new congressional districts for violating Section Two of the Voting Rights Act. Ruling on one of those lawsuits, Milligan v. Merrill, the unanimous panel said the plaintiffs are “substantially likely to establish that the Plan violates Section Two of the Voting Rights Act.” The panel also said plaintiffs could likely show that “Black voters have less opportunity than other Alabamians to elect candidates of their choice to Congress.”

On Jan. 24, Mississippi Gov. Tate Reeves (R) signed the state’s congressional redistricting plan. Mississippi was apportioned four seats in the U.S. House of Representatives after the 2020 census, the same number it received after the 2010 census.

After the state Senate approved the plan, Lee Sanderlin wrote in the Mississippi Clarion Ledger, “The bill preserves the current balance of congressional power in Mississippi, keeping three seats for Republicans and one for lone Democrat Bennie Thompson, D-Bolton.”

Congressional redistricting has been completed for 271 of the 435 seats (62.3%) in the U.S. House of Representatives.

Up next in filing deadlines: Alabama, West Virginia, and New Mexico 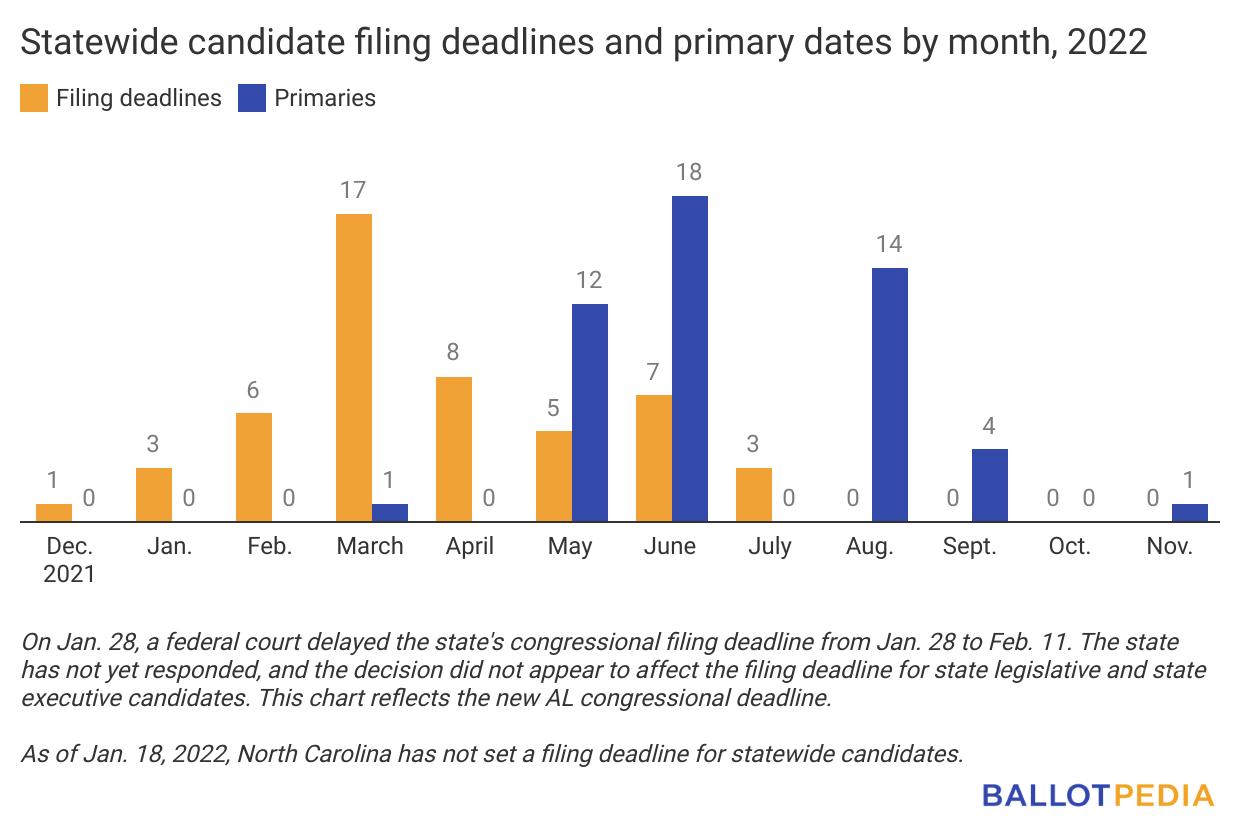 Here’s what’s next for filing deadlines:

Alabama: Alabama’s statewide filing deadline was originally scheduled for Jan. 28. However, as we mentioned in the story above, a federal court recently moved the filing deadline for U.S. House candidates from Jan. 28 to Feb. 11 to give the Legislature more time to redraw its congressional district map. Alabama Attorney General Steve Marshall (R) said he would appeal the decision. Currently, the filing deadline for state executive and state legislative candidates is still set for Jan. 28, but Marshall has not said whether he intends to keep the deadline.

West Virginia: West Virginia’s statewide filing deadline is scheduled for Jan. 29. The deadline applies to U.S. House candidates and state legislative candidates. The state does not have any U.S. Senate or state executive offices up for election this year.

Following Ohio, the statewide filing deadline for candidates Indiana, Nebraska, and Maryland will pass on Feb. 4, Feb. 15, and Feb. 22, respectively.

#WednesdayTrivia: How many states require a simple majority to override gubernatorial vetoes?

In the Tuesday Brew, we looked at how the Kentucky General Assembly recently voted to override Gov. Andy Beshear’s veto of the state’s state legislative and congressional maps. In Kentucky, a simple majority vote from both chambers is all that is required to override a gubernatorial veto.

How many states require a simple majority to override gubernatorial vetoes? Select an answer below to see how you did!