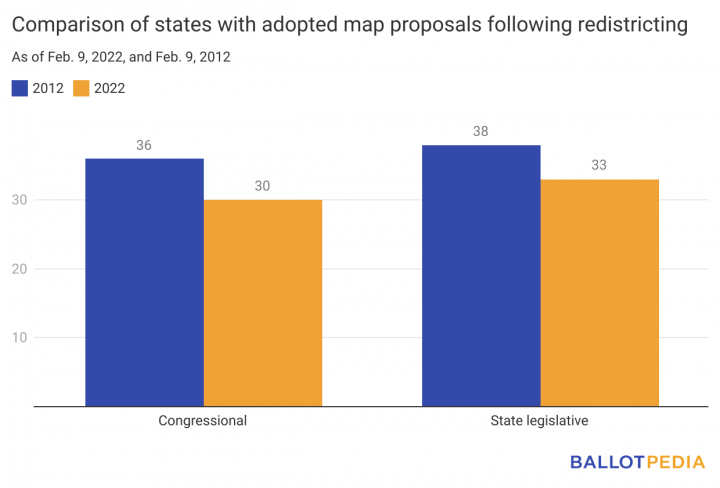 Welcome to the Wednesday, February 9, Brew.

Here’s a roundup of the latest redistricting news out of Alabama, New York, and Tennessee.

On Feb. 7, the U.S. Supreme Court allowed Alabama’s new congressional district boundaries to be used for the 2022 elections. The Court’s decision overturned a U.S. district court’s Jan. 24 ruling that blocked the new maps on the grounds they violated Section Two of the Voting Rights Act.

In its ruling, the Court said the challenge to Alabama’s maps could still proceed and that it would hear oral arguments either this term or the next.

On Feb. 7, the Ohio Supreme Court voted 4-3 to strike down the Ohio Redistricting Commission’s revised state legislative maps. The court ruled the maps violated the Ohio Constitution and ordered the commission to submit a new set of maps by Feb. 17.

On Sept.16, 2021, the commission voted 5-2 to approve new legislative districts, with the five Republican members voted in favor and the two Democratic members against. Three sets of plaintiffs filed lawsuits with the Ohio Supreme Court in September 2021, alleging the new maps violated the provisions of the state’s 2015 Bipartisan Redistricting Commission Amendment. That amendment requires legislative districts to be compact, contiguous, and “forbids district plans from favoring or disfavoring either political party.”

On Jan. 12, the Court ruled against the first set of approved legislative maps, and ordered the redistricting commission to redraw them within 10 days. The commission voted 5-2 to approve new maps on Jan. 22.

Tennessee Gov. Bill Lee (R) signed new congressional and legislative districts into law on Feb. 6. Both chambers of the legislature approved the state’s new district boundaries along party line votes in January. According to Adam Friedman and Melissa Brown of the Nashville Tennessean, the “congressional map divides Davidson County [Nashville] into three separate congressional districts that will dilute the county’s Democratic and minority vote.” After the 2020 census, Tennessee has nine U.S. House districts, the same as it had following the 2010 census.

Tennessee House Speaker Pro Tempore Pat Marsh (R) said the congressional map complied with all federal and state laws, and that splitting Davidson County was beneficial to the area. “In the last 10 years, Davidson County has had one congressman in Washington, D.C. In this proposed plan, they will have three. I think that’s three times as good, three times more representation,” Marsh said.

After the legislature approved the map on Jan. 24, 5th District U.S. Rep. Jim Cooper (D) announced he would not run for re-election: “Despite my strength at the polls, I could not stop the General Assembly from dismembering Nashville,” Cooper said. According to Bloomberg Government‘s Greg Giroux, the map changes the 5th District from one “Joe Biden carried by 24 percentage points in the 2020 election to a Republican-leaning area Donald Trump would have won by 11 points.”

Texas kicks off the 2022 primary season on March 1. Over the course of this year, we’ll be bringing you highlights from our coverage of Democratic and Republican primary elections.

Paxton has run on his record as Attorney General—a record he says includes challenging the Biden administration in court and guarding religious freedom. Bush, Gohmert, and Guzman have said allegations that Paxton engaged in criminal misconduct make him unfit for office. In 2015, Paxton was indicted on three counts related to securities fraud violations. The case is still open, and no trial has been scheduled. In 2020, the FBI opened an investigation into claims Paxton used the Office of the Attorney General to benefit a political donor. Paxton has denied wrongdoing in both cases.

Let’s take a quick look at the candidates:

Ken Paxton: Paxton was first elected Attorney General in 2014. He was unopposed in the 2018 primary and defeated Justin Nelson (D) 50.6% to 47% in the general election. In June 2021, Paxton earned an endorsement from former President Donald Trump (R). Paxton said: “As the values conservative endorsed by President Trump, I am proud of my record standing up to and defeating the Biden Administration – repeatedly. I stand by my record and values, and ask each voter to join President Trump in standing with me for a safer and stronger Texas.”

George P. Bush: Bush was elected Texas Land Commissioner in 2014. Bush said he’s running because “Texans deserve a top advocate that’s above reproach, not under indictment, focused on the job, going to defend our state against federal overreach, but also take on progressive mayors that are doing everything, for example, here in Austin, such as defunding the police.” Bush said that as attorney general, he would secure the border, support law enforcement, jail human traffickers, and restore integrity to the office.

Louie Gohmert: Gohmert has represented Texas’ 1st Congressional District since 2005. Gohmert said he’s running because he is concerned the FBI could indict Paxton after the primary, handing the general election to a Democratic candidate. Gohmert said he would fight to preserve election integrity, oppose unconstitutional pandemic mandates, and stop illegal immigration.

Eva Guzman: Guzman served on the Texas Supreme Court from 2009 to 2021. She completed our Candidate Connection survey. In her response, Guzman said the office “requires someone with a deep knowledge of both criminal and civil law and the ability to digest complex legal issues–and win. I know how to win cases because I know how to think like a judge.”

Candidates and committees in Newsom recall raised more than $142 million and spent $145.4 million

California Gov. Gavin Newsom (D) won a recall election on Sept. 14, 2021. Now, we’re bookending our coverage of that election with a look at how much money recall supporters and opponents raised and spent.

According to final campaign finance figures that became available in early February, candidates and committees raised a combined $142 million in the election. Voters—roughly 12.8 million of them—retained Newsom as governor 61.9% to 38.1%. The ballot asked voters first if they would like to recall Newsom, and then who they would like to elect in his place.

Candidates and committees raised money for both questions. Here’s a breakdown: