Redistricting news from Maryland to Wyoming and more

Here’s an update on news from the past week. 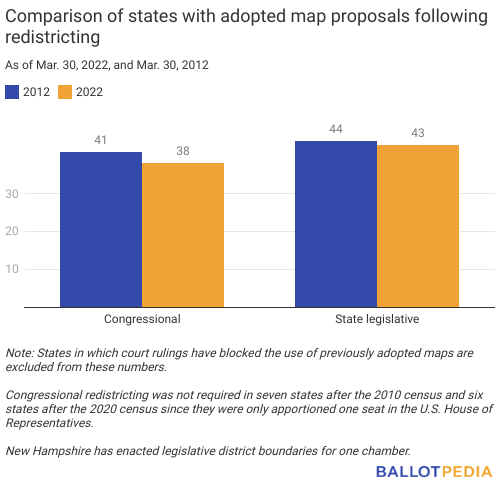 Maryland Circuit Court Senior Justice Lynne Battaglia ruled on March 25 that the state’s new congressional district boundaries were unconstitutional due to partisan gerrymandering. Battaglia gave the Maryland General Assembly until today (March 30) to adopt a new plan. In her ruling, Battaglia said, “It is extraordinarily unlikely that a map that looks like the 2021 Plan could be produced without extreme partisan gerrymandering.”

Maryland enacted the congressional district boundaries on Dec. 9, 2021, after both chambers of the Democratic-controlled legislature overrode Gov. Larry Hogan’s (R) veto of the plan. The House voted 96-41 to override Hogan’s veto and the Senate voted 32-14 to do the same. On Dec. 7, 2021, the House of Delegates passed the redistricting plan, 97-42, with all “yes” votes coming from Democrats and 41 Republicans and one Democrat voting “no.” The Senate approved the congressional map, 32-15, on Dec. 8, 2021, in a party-line vote.

The MICRC approved the state’s congressional map on Dec. 28, 2021, by a vote of 8-5. Two Democrats, two Republicans, and four nonpartisan members backed the plan. The five remaining members voted for other plans. As required, the adopted map was approved by “at least two commissioners who affiliate with each major party, and at least two commissioners who do not affiliate with either major party.”

Writing about the state’s congressional map, the Detroit Free Press’ Clara Hendrickson and Todd Spangler wrote, “According to three measures of partisan fairness based on statewide election data from the past decade, the map favors Republicans. But those measures also show a significant reduction in the Republican bias compared to the map drawn a decade ago by a Republican legislature, deemed one of the most politically biased maps in the country. One of the partisan fairness measures used by the commission indicates Democratic candidates would have an advantage under the new map.”

Cleveland.com’s Andrew Tobias wrote that the commission approved a redistricting “plan nearly identical to one the Ohio Supreme Court rejected as unconstitutional.” After the vote, Huffman said the commission needed to approve a proposal by the state supreme court’s deadline, adding, “I think there’s a decent chance this map won’t meet the court’s test.”

The Ohio Redistricting Commission previously approved legislative district boundaries on Sept. 16, Jan. 22, and Feb. 24. The Ohio Supreme Court ruled those proposals violated sections 6 (A) and (B) of the state constitution. Those provisions, which came out of a 2015 voter-approved constitutional amendment establishing the redistricting commission, require legislative district boundaries not “be drawn primarily to favor or disfavor a political party.”

On March 23, the U.S. Supreme Court reversed a Wisconsin Supreme Court decision that enacted that state’s new legislative district boundaries. In its unsigned opinion, the court said that the “court committed legal error in its application of decisions of this Court regarding the relationship between the constitutional guarantee of equal protection and the VRA[Voting Rights Act].” The court sent the case back to the Wisconsin Supreme Court for further proceedings, writing, “Summarily correcting the error gives the court sufficient time to adopt maps consistent with the timetable for Wisconsin’s August 9th primary election.”

The Wisconsin Supreme Court adopted maps that Gov. Tony Evers (D) had submitted. On Nov. 18, 2021, Evers had vetoed district boundaries the legislature approved. The Senate had approved the maps 21-12 along party lines on Oct. 20, with all Republicans in the chamber voting for the proposal and all Democrats voting against it. The House passed the maps on Nov. 11 by a 60-38 party-line vote.

Wyoming Gov. Mark Gordon (R) allowed the state’s legislative district boundaries to become law on March 25 without signing the bill (HEA 62/HB 100) lawmakers approved on March 11. The bill adds one Senate and two House districts to the legislature, bringing the totals to 31 senators and 62 representatives. Wyoming was apportioned one at-large district in the U.S. House of Representatives, meaning that no congressional redistricting is required.

In a letter explaining his decision, Gordon said, “The final legislation was amended in the waning hours of the legislative session to a version that apparently establishes some districts that appear to exceed presumptively acceptable deviation limits. Redistricting is an inherently legislative process and, therefore, I must assume this final product represents the “best effort” of this Legislature. Thus, for this reason as well as a desire to see our elections have their best chance to proceed in an orderly and proper way, I am allowing HEA 62 to become law without my signature.”

The Federal Election Commission provides a single source for researching and understanding campaign finance information for federal races. State-level campaign finance data, on the other hand, can be difficult to find and challenging to interpret—each state has its own laws and processes for reporting information.

That’s why we’ve partnered with Transparency USA, a nonprofit, nonpartisan 501(c)(3) organization, which has streamlined access to this information in an elegant, standardized format, allowing us to provide detailed financial information for state-level races.

We’ve been publishing content on Ballotpedia.org since 2018 through this partnership. This year, in addition to the encyclopedic content on Ballotpedia, we plan to publish several hundred articles breaking down campaign finance numbers in the 11 states TransparencyUSA covers: Arizona, Florida, Indiana, Michigan, Minnesota, North Carolina, Ohio, Pennsylvania, Texas, Virginia, and Wisconsin. 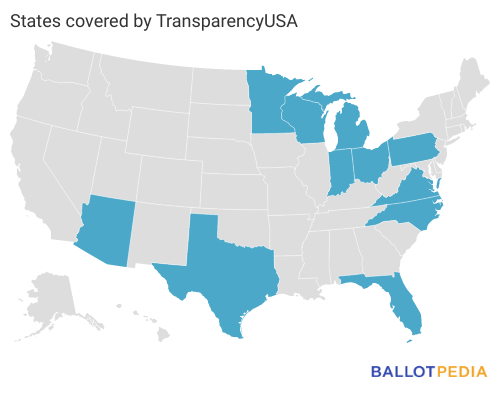 Here’s a sampling of stories we’ve already published. You can look forward to seeing many more like these in the months ahead.

To learn more about our partnership with Transparency USA, click the link below.

A preview of Idaho’s congressional races

Idaho’s U.S. House primaries will take place on May 17, 2022. Also on the ballot will be a U.S. Senate seat, governor, lieutenant governor, attorney general, secretary of state, and all 105 seats in the state legislature.