Welcome to the Thursday, June 9, Brew.

An update on this week’s battleground primary results

Here’s a look at some noteworthy results from battleground races:

Caruso and Bass advance to November general election: U.S. Rep. Karen Bass and Rick Caruso were the top two vote-getters in the nonpartisan primary for Mayor of Los Angeles. Caruso received 41.2% of the vote to Bass’ 37.8%. Public safety and homelessness were central issues in the race. Bass has represented California’s 37th Congressional District as a Democrat since 2013. Caruso, a businessman, is a registered Democrat. He was previously registered as a Republican.

San Francisco recalls District Attorney Chesa Boudin: San Francisco voters recalled District Attorney Chesa Boudin, with unofficial results showing 61.3% voting “Yes.” The issue of crime was a focal point in this election. Supporters alleged Boudin did not do enough to make residents feel safe. Boudin said his goal had been reforming the criminal justice system and that the recall was politically motivated. Once the recall results are certified, Mayor London Breed will appoint an interim district attorney to serve until an election can be held in November. The winner of that election will serve out the rest of Boudin’s term, which ends in 2024. The recall was the second one to take place against a San Francisco elected official in 2022. In February, a majority of voters cast ballots in favor of recalling three members of the San Francisco Unified School District Board of Education.

So far this year, 91 state legislative incumbents have lost to challengers across the 17 states that have held primaries this year—the largest number and highest incumbent loss rate in these 17 states since 2014. Of those 91 incumbents, 17 are Democrats and 74 are Republicans. 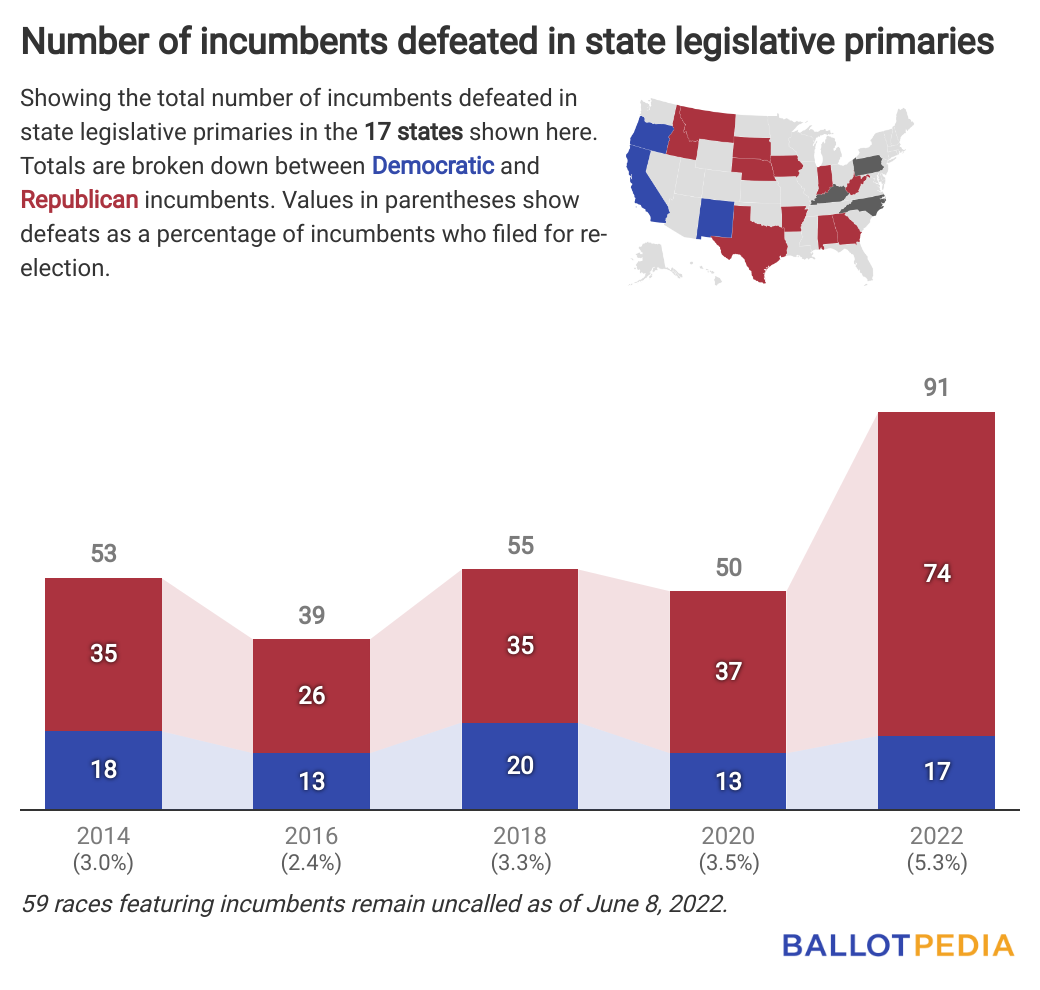 In addition to earlier primaries, these totals include preliminary results from primaries held in California, Iowa, Montana, New Mexico, and South Dakota, on June 7. So far, 13 incumbents have lost in those states:

In Iowa, the six Republican incumbents who lost were all members of the House of Representatives. Three of the races featured more than one incumbent. According to The Iowa Torch’s Shane Vander Hart, “School choice was an issue in several races.” Gov. Kim Reynolds (R) endorsed challengers to incumbent Republicans who opposed her proposal to send low-income public school students to private schools through taxpayer-funded scholarships. Dustin Hite (R), who chairs the House Education Committee and who opposed Reynolds’ proposal, ran against a Reynolds-endorsed candidate and was one of the six incumbents who lost.

Republican incumbents have lost at a higher rate than Democrats, but fewer Democratic incumbents are facing primary challengers.

Click here to read more about incumbents defeated in 2022 elections, and click below to see June 7 election results.

Voters will decide Democratic and Republican primaries for a U.S. Senate seat and all four U.S. House districts.

The race for the U.S. Senate is expected to be competitive, with three independent race rating outlets calling the general election Toss-up. The two preceding elections were both decided by 5 percentage points or fewer. Four candidates are running in the Democratic primary, including incumbent Catherine Cortez Masto, who was first elected in 2016. Eight candidates are running in the Republican primary. Sam Brown and Adam Laxalt are the two candidates who’ve led in polls and in fundraising.

Nevada’s U.S. House delegation currently comprises three Democrats and one Republican. General elections for the 1st, 3rd, and 4th Districts are expected to be competitive—race ratings outlets consider all three to be either Toss-up or Lean Democratic. Thirty-eight candidates filed to run in the four districts, including 21 Republicans, 12 Democrats, and five independent or third party candidates.

Democrats control the state Senate 11-9 (with one vacancy) and the state Assembly 25-16 (with one vacancy). Overall, there are more contested primaries scheduled than at any point since 2014. Of the 106 possible primaries, more than one candidate filed to run in 48 (45%). Contested Republican primaries, in particular, more than doubled this year compared to 2020 from 15 to 31.

In Nevada, the primary candidate with the most votes wins—even if that candidate receives less than 50% of the total vote. Nevada is one of 40 states without primary election runoffs. The state cancels uncontested primaries and does not permit write-in candidates.

Every month, we bring you an update on Article III judicial vacancies. Article III judgeships refer to federal judges who serve lifetime appointments on the U.S. Supreme Court, the U.S. Court of International Trade, or one of the 13 U.S. courts of appeal or 94 U.S. district courts.

According to the latest vacancy data from the U.S. Courts, there were 41 total announced upcoming vacancies for Article III judgeships.

These positions are not yet vacant but will be at some point in the future with every judge having announced his or her intent to either leave the bench or assume senior status. The president and Senate do not need to wait for a position to become vacant before they can start the confirmation process for a successor. There are 11 nominees pending for upcoming vacancies.

Twenty-four vacancy effective dates have not been determined because the judge has not announced the date he or she will leave the bench.

In addition to these 41 upcoming vacancies, there are 75 current Article III vacancies in the federal judiciary out of the 870 total Article III judgeships.

President Biden has nominated 96 individuals to federal judgeships on Article III courts. Sixty-six of those nominees have been confirmed. 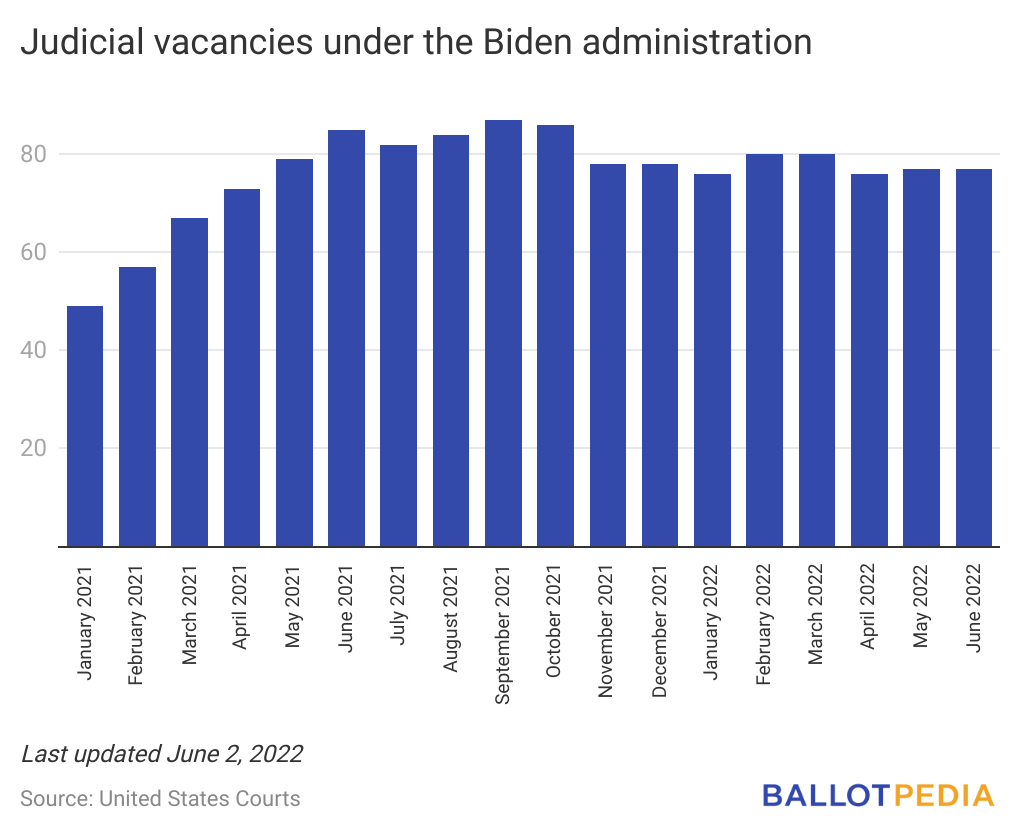