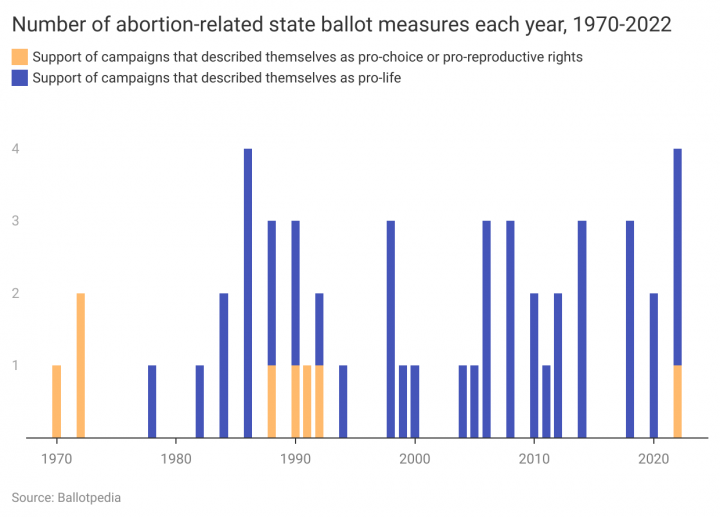 Abortion has been a perennial issue for statewide ballot measures across the U.S. since the 1970s, and 2022 is continuing that trend.

There will be at least four ballot measures addressing abortion this year, which is the most since 1986. Measures have been certified for the ballot in Kansas, Kentucky, Montana, and Vermont. Should one more abortion-related measure make the ballot, 2022 will break that record.

Since 1970, there have been 47 abortion-related ballot measures, and 40 (85%) of these had the support of organizations that described themselves as pro-life. Voters approved 11 (27.5%) and rejected 29 (72.5%) of these 40 ballot measures. Campaigns sponsored ballot measures that addressed state constitutional language; personhood definitions; restricting, limiting, or regulating abortion; prohibiting public funding for abortion; parental notification; and practitioner requirements.

The other seven abortion-related ballot measures had the support of organizations that described themselves as pro-choice or pro-reproductive rights. Voters approved four (57%) and rejected three (43%). Campaigns sponsored ballot measures that addressed state constitutional rights; legalizing abortion or expanding abortion timelines; and allowing public funding for abortions.

Some of the most successful abortion-related topics on the ballot were: amendments designed to provide that state constitutions cannot be interpreted to establish a state constitutional right to abortion (4 of 6, or 67%); laws to legalize abortion or expand the timeframe for when an abortion can occur (4 of 6, or 67%); and parental notification laws (4 of 9, or 44%). Before Roe v. Wade in 1973, three abortion-related measures were on the ballot in Michigan, North Dakota, and Washington, and each was designed to allow abortion in its respective state.

As of June, state legislatures were responsible for each of the four abortion-related measures on the 2022 ballot. Campaigns for initiatives are collecting signatures in Arizona, Colorado, and Michigan, and a legislative constitutional amendment could make the ballot in California.

In Vermont, voters will decide on the first ballot measure to establish a state constitutional right to reproductive autonomy. Eileen Sullivan, communications director for the Planned Parenthood Vermont Action Fund, stated, “Justice [Anthony] Kennedy’s retirement prompted action in Vermont, so that these rights in Vermont would be protected no matter what happens in Washington, D.C.” The proposed initiatives in Arizona and Michigan would provide for state constitutional rights to reproductive freedom; in both cases, the term reproductive freedom would be defined to include abortion.

The deadlines for the remaining abortion-related ballot initiatives that could appear on the ballot this November are July 7 for Arizona, July 11 in Michigan, and August 8 for Colorado. The California State Legislature has until June 30 to place the right to reproductive freedom amendment on the ballot this year.