Welcome to the Wednesday, July 27, Brew.

What others say about wave elections

As we continue our examination of wave elections during our “Week of Waves,” let’s take a look at how others have defined wave elections.

As a reminder, we define a wave election as the top 20% of elections over a 100-year period that had the largest losses for the incumbent president’s party.

If you were to search for waves in Google Trends or other comparative resources, you would find a variety of definitions for a wave election. Here are a few examples:

But Walter also says her outlet predicts Republicans will gain between 20 and 35 seats, the reason being that, unlike in 1994 and 2010, Republicans already hold a large number of seats, leaving less room for pick-ups.

According to Google Trends, overall interest in the phrase “wave election” is currently at the lower end compared to searches over the past year. But interest tends to increase close to and after general elections. The spike in the graph below, for example, corresponds to elections held in New Jersey and Virginia in 2021.

Differing definitions lead to differing interpretations of what constitutes a wave.

During our analysis of U.S. House elections between 1918 and 2016, for example, we found that Republicans would have had to lose 48 U.S. House seats for the 2018 election to constitute a wave at that level.

Republicans lost a net 42 seats in 2018—not enough to meet our definition of a House wave.

Some outlets described that midterm as a “blue wave,” in reference to Democratic gains. But by Ballotpedia’s standards, 2018 was not a wave election year in the U.S. House.

Use the link below to learn more about our analysis of wave elections and the different interpretations you might come across as the term comes up, as it does every election cycle.

We’re heading into the next round of primary elections! Voters in five states—Arizona, Kansas, Michigan, Missouri, and Washington—will cast their ballots on Aug. 2. Yesterday, we looked at Arizona. Today, let’s turn our attention to the Sunflower State.

Voters in Kansas will elect one U.S. Senator and four U.S. Representatives.

Incumbent Sen. Jerry Moran (R), who was first elected in 2010, is running in the Republican primary against challenger Joan Farr. Six candidates are running in the Democratic primary. George McGill, elected in 1930, was the last Democrat to serve as U.S. Senator from Kansas.

Voters will also elect a governor, lieutenant governor, attorney general, and all 125 House members. Let’s take a look at a few of those races.

Incumbent Gov. Laura Kelly (D) is running against Richard Karnowski in the Democratic gubernatorial primary. Arlyn Briggs and Derek Schmidt are running in the Republican primary. This is the only governorship Democrats are defending in 2022 in a state that Donald Trump (R) won in 2020. Trump defeated Joe Biden (D) in Kansas 56% to 42%. Kelly was first elected in 2018, defeating Secretary of State Kris Kobach (R) 48-43%.

Voters will decide primaries for all 125 state House districts. No state Senate districts are on the ballot because the Senate holds elections every four years during presidential election cycles.

Republicans control the state House 86-39. Thirty-eight state House primaries are contested by multiple candidates. Those primaries include 12 Democratic primaries and 26 Republican primaries. For Democrats, this is the same as in 2020. For Republicans, that number decreased 10% from 29 in 2020 to 26 in 2022. 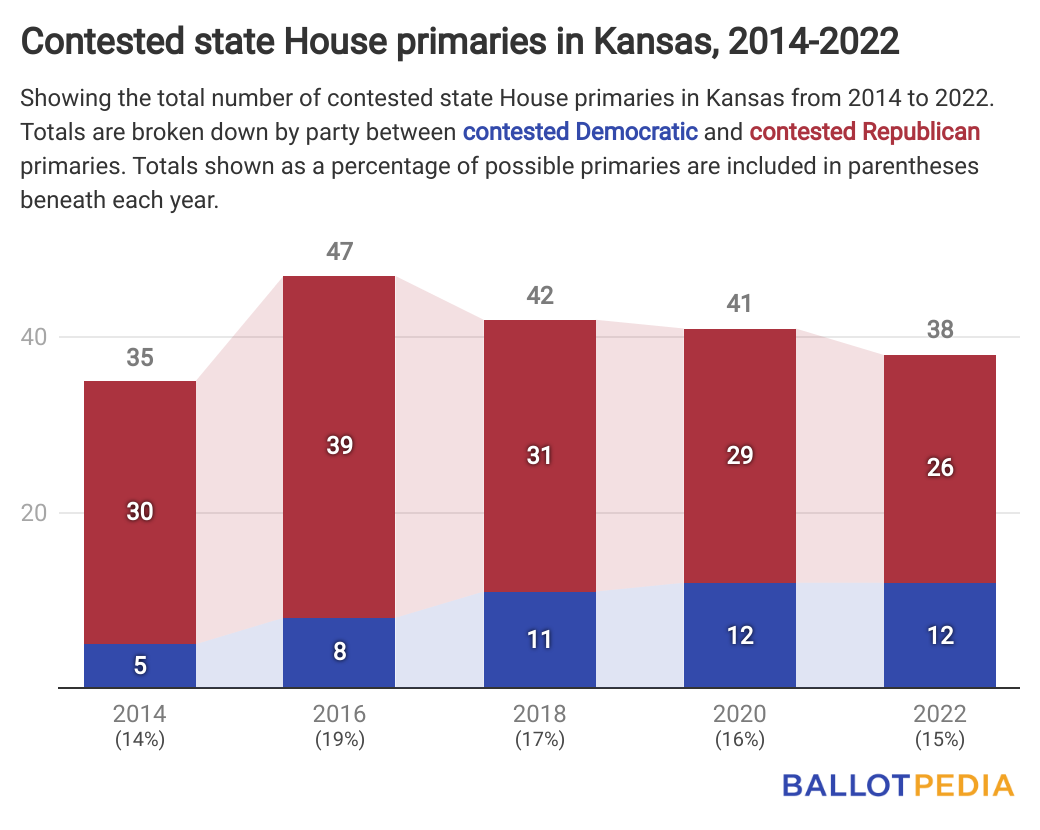 Seventeen of the 38 contested primaries feature an incumbent, representing 17% of incumbents who are running for re-election. This is the lowest number of incumbents in contested House primaries of the past five election cycles. In 2020, 9% of incumbent legislators were defeated in primaries. That number was 6% in 2018 and 11% in 2016.

In Kansas, the primary candidate with the most votes wins—even if that candidate receives less than 50% of the total vote. Kansas is one of 40 states without primary election runoffs. The state does not cancel uncontested primaries, and write-in candidates are required to file with the Secretary of State.

Click below to learn more about Kansas’ upcoming elections.

A look at the Aug. 13 Democratic primary for governor of Hawaii

Cayetano co-founded Hawaii’s largest laundry company and served as president and CEO for 34 years. Cayetano said, “My record of building a business of a thousand employees and supporting our community is one of action and results.” In 1997, Cayetano married Hawaii Gov. Ben Cayetano (D), who served as governor until 2002.

Green is Hawaii’s current lieutenant governor and an emergency room physician. He said, “I’m running for Governor because Hawaii needs elected leaders we can trust — to tell us the truth, keep us safe and informed, to care about working families, and to be transparent and accountable to the people.” Green highlighted his role serving as COVID liaison while lieutenant governor.

Kahele, a veteran and lieutenant colonel in the Hawaii Air National Guard, was elected to represent Hawaii’s 2nd Congressional District in 2020. Kahele said, “Congress established our great state in 1959 on the condition that the State of Hawaiʻi would establish and manage the ceded Public Land Trust for the benefit of Native Hawaiians and the general public. Ensuring that the state restores its kuleana to manage this public trust is a foundation of my platform for governor.”

Affordable housing has been a central theme in the race.

Major independent observers rate the general election as solid Democratic or safe Democratic. Ige was first elected in 2014 and won re-election in 2018 by a margin of 29 percentage points. Democrats have had trifecta control of Hawaii state government since 2011.