Welcome to the Wednesday, August 10, Brew.

What is a voter file? A voter file typically contains voters’ names, addresses, and a record of the elections in which they have participated. And while the file may indicate when someone has voted in a given election, they don’t reveal the candidates for whom voters have cast ballots. The file may also contain ages, phone numbers, email addresses, political party affiliations, previous political donations, and other consumer data. Because voter files contain information about thousands of voters, they can be helpful resources for political parties, campaigns, pollsters, academic researchers, and journalists to study.

Voter file data is available for purchase in every U.S. state and Washington, D.C. Each state has developed its own guidelines regarding the sale of voter registration data. Indeed, the cost to purchase voter files can range from $0 in 11 states to $37,000 in Alabama!

Moreover, the types of individuals and groups who are allowed to purchase voter files, and the type of data included in those files, also vary from state to state.

In a 2016 report, the U.S. Election Assistance Commission classified the availability of voter file information in each state as either open, mixed, or restricted, based on the type of individuals or group that were allowed to purchase the data.

The map below provides a summary of the availability of voter files for each state and Washington, D.C. as of August 2022. 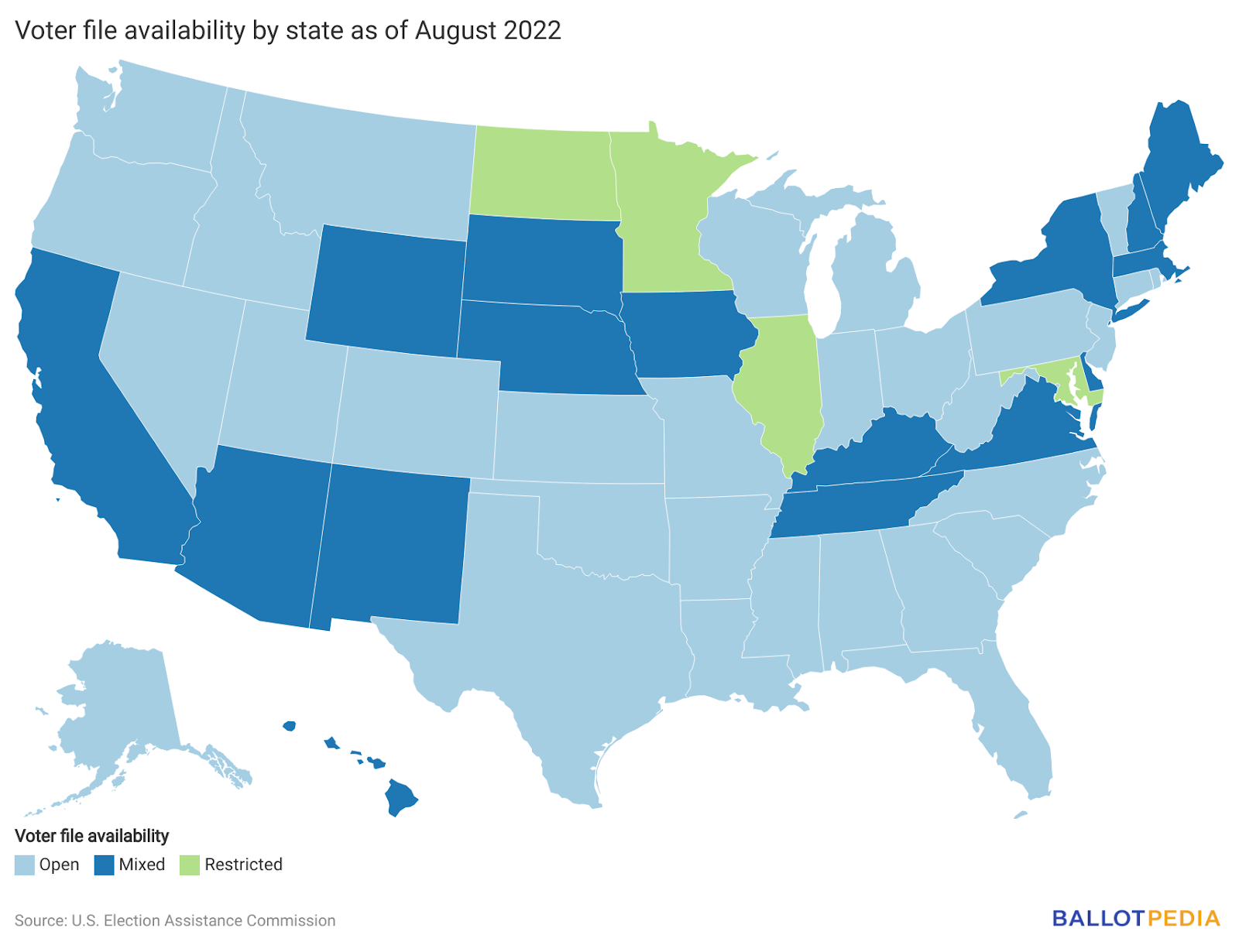 New York will hold primaries on Aug. 23. One of those primaries is the last of six in the country this year featuring two U.S. House incumbents.

The U.S. Constitution does not require U.S. House members to live in the district that they represent. When district lines change during redistricting, some U.S. House incumbents end up running for re-election in the same congressional district as another U.S. House member.

Both representatives were first elected in 1992. Maloney chairs the Oversight and Government Reform Committee and Nadler chairs the Judiciary Committee. Maloney and Nadler are both members of the Congressional Progressive Caucus.

Two general elections for the U.S. House will feature multiple incumbents as a result of redistricting or special elections. Those are in Florida’s 2nd Congressional District and Texas’ 34th.

You can read more about U.S. House elections with multiple incumbents here. Click below to read more about the Democratic primary for New York’s 12th Congressional District.

Let’s turn to an education-related story out of Texas. Be sure to subscribe to Hall Pass, our weekly newsletter on school board politics and education policy, for more stories like this one!

In an Aug. 1 meeting, the Texas State Board of Education began discussing proposed changes to the state’s social studies curriculum—particularly U.S. history—that would align with Senate Bill 3. Senate Bill 3, which went into effect in December 2021, prohibits teaching what it defines as divisive concepts. Examples include promoting ideas that “one race or sex is inherently superior to another race or sex” and that “an individual, by virtue of the individual’s race or sex, is inherently racist, sexist, or oppressive, whether consciously or unconsciously.”

The state board is responsible for updating the Texas Essential Knowledge and Skills (TEKS) curriculum standards every eight years.

Sen. Bryan Hughes (R), who authored Senate Bill 3, spoke to the board to offer guidance on implementing the law into the curriculum. Hughes said the “bill is not an attempt to sanitize or to teach our history in any other way than the truth—the good, the bad and the ugly—and those difficult things that we’ve been through and those things we’ve overcome.” He also said, “No one is saying that we don’t have systemic racism. But what we’re saying is, we’ve made a lot of progress. We have a long way to go. But the way to get there is to come together as Americans.”

State Board of Education member Aicha Davis (D) argued that Senate Bill 3 has been damaging to the public school system. She said: “We always talk about teachers leaving in droves and this was one of the reasons.” She responded to Hughes’ guidance on aligning curriculum with the law by saying, “Teachers were literally scared to teach even the TEKS that existed because of this.”

The proposed curriculum updates are available for review on the Texas Education Agency’s website and are open for public comment. The Texas State Board of Education will vote on proposed changes to the curriculum in November.

Learn who sets K-12 curriculum in public schools across the 50 states at the link below.