Welcome to the Monday, August 29, Brew.

Today is the first in our 50 states in 50 days series. Long-time Brew readers will remember this from 2018 and 2020. In this series, we will preview what’s on the ballot in each state, which parties control state and congressional offices, and what you should know to cast your ballot. The next 50 Brew issues take us all the way up to the general election. So—buckle up!

We’ll go in order of when early voting starts and how early each state held their primary. The first state in our series is Pennsylvania—the Keystone state!

On the ballot in Pennsylvania

At the federal level, Pennsylvania voters will elect one U.S. Senator and 17 U.S. Representatives. At the state executive level, the governor and lieutenant governor offices are up for election this year. Twenty-five out of 50 seats in the state Senate and all 203 state House districts up for election.

There are two open U.S. House districts and 40 open seats in the state legislature this year.

Pennsylvania lost one congressional districts after the 2020 census, going from 18 in 2020 to 17 this year.

Congressional and state legislative elections will take place under new district lines. Here are the congressional maps in effect before and after the 2020 redistricting cycle in Pennsylvania:

In 2022, 103 state legislative seats in Pennsylvania, or 45% of all seats up for election, do not have major party competition. 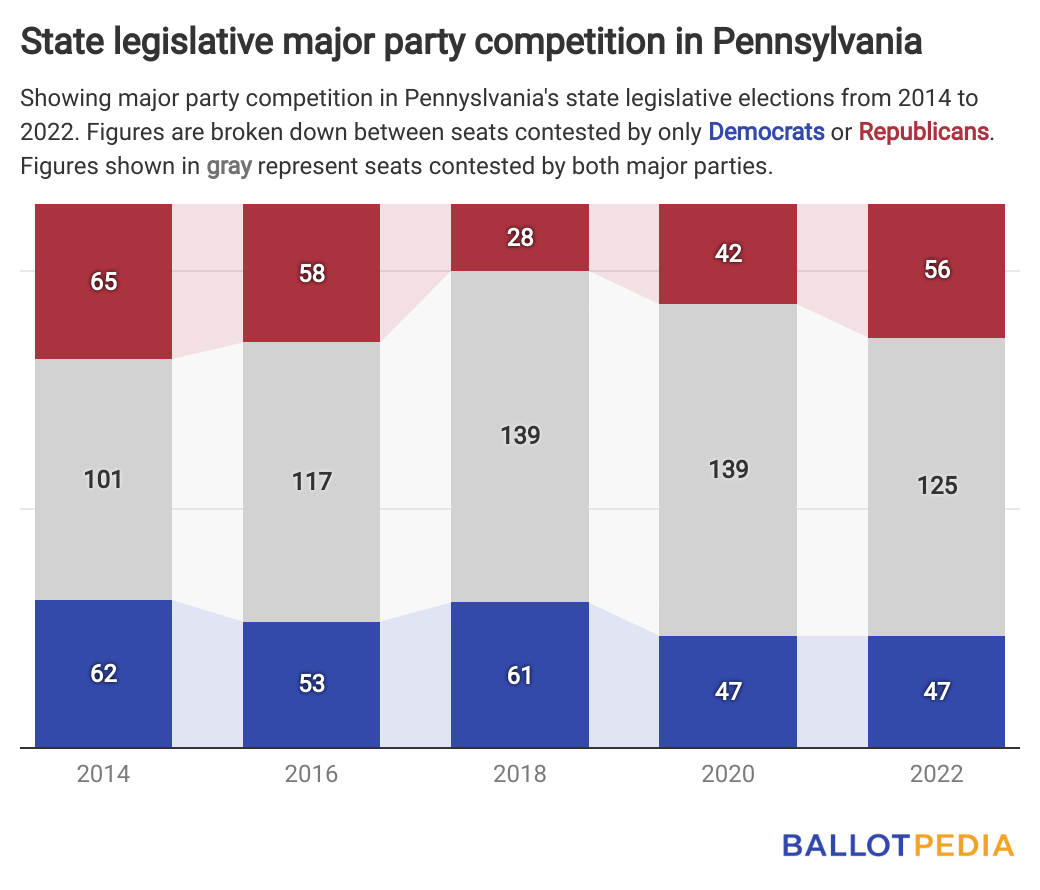 There are no statewide ballot measures in Pennsylvania in 2022.

Sixty-nine ballot measures were on the ballot from 1968 and 2021. Sixty-two were approved and seven were defeated.

Six proposed rules and eight final rules were deemed significant under E.O. 12866. Significant rules are those defined by the potential to have large effects on the economy, environment, public health, or state or local governments. The proposed and final rules deemed significant include amendments to the Department of Veterans Affairs (VA) regulations and to the Federal Management Regulation (FMR) regarding physical security standards.

Click the link below to learn more about the Federal Register and our Administrative State Project.

Come work with us!

We’re a team of fast learners and creative problem solvers. We believe the world will be a better place if every citizen has access to information they need to make informed decisions in every election in which they are eligible to vote.

Our work takes place across several departments—editorial, communications, external relations, operations, tech, and more. If our mission to close the ballot information gap resonates with you, then click—and bookmark—the link below to see our current openings. Check back often for new opportunities!