Welcome to the Thursday, November 10, Brew.

A roundup of election results from key state-level races

Now we’re able to return to your inboxes having gotten some sleep. Ever since the first polls closed Tuesday night, the country’s attention has focused on critical battleground races for governor, U.S. Senate, and U.S. House. Some of those elections remain uncalled..

Today, we’re stepping back from the headline-grabbing elections to bring you results and analysis from five key—but often overlooked—areas of politics that we’ve been closely tracking this election cycle: state legislatures, state financial officers, state supreme courts, secretaries of state, and attorneys general.

Here’s how Republicans did: While Republicans have not yet gained control of any new chambers this cycle, the party has expanded its control in several states. In Florida, North Carolina, South Carolina, and Wisconsin, Republicans gained veto-proof majorities in at least one chamber

Here’s a breakdown of the changes we know so far:

With four chambers changing party control, this cycle has surpassed 2020, when only two chambers—the New Hampshire House and Senate—changed hands, going from Democrats to Republicans.

Twenty-five states held state supreme court elections last night, accounting for 70 (20%) of the nation’s 344 supreme court seats. Heading into the elections, Republicans had majorities on 26 state supreme courts, Democrats controlled 17, and control of the nine remaining courts was either split between parties or unclear.

Here’s how Democrats did: A Democrat won a seat in Illinois currently held by a Republican.

Most state supreme courts are officially nonpartisan. In June 2020, Ballotpedia conducted a nationwide study to determine each state supreme court justice’s affiliation with one of the two major political parties. Those findings were used for this analysis.

For the partisan labels of justices who assumed office after that study was published, factors considered include, but are not limited to: whether the justice previously held office with a party label, trifecta status at the time of appointment, and whether the justice donated to candidates from a certain party.

Heading into the election, Republicans controlled 28 offices, the party’s largest number in more than three decades. Voters decided who would control 34 of 50 state attorney general offices last night. Thirty offices were up for election, and four offices’ appointment authorities were on the ballot.

Here’s how Republicans did: Republicans gained one office that Democrats currently hold in Iowa.

Here’s how Democrats did: Democrats gained one office that Republicans currently hold in Vermont.

Two elections remain uncalled: the Republican-controlled office in Arizona and the Democratic-controlled office in Nevada. Alaska’s governor appoints the state attorney general with confirmation from the state legislature, and that state’s gubernatorial election is also uncalled. If none of three uncalled races change party control, the nationwide partisan balance of attorneys general will remain the same at 22 Democrats and 28 Republicans. 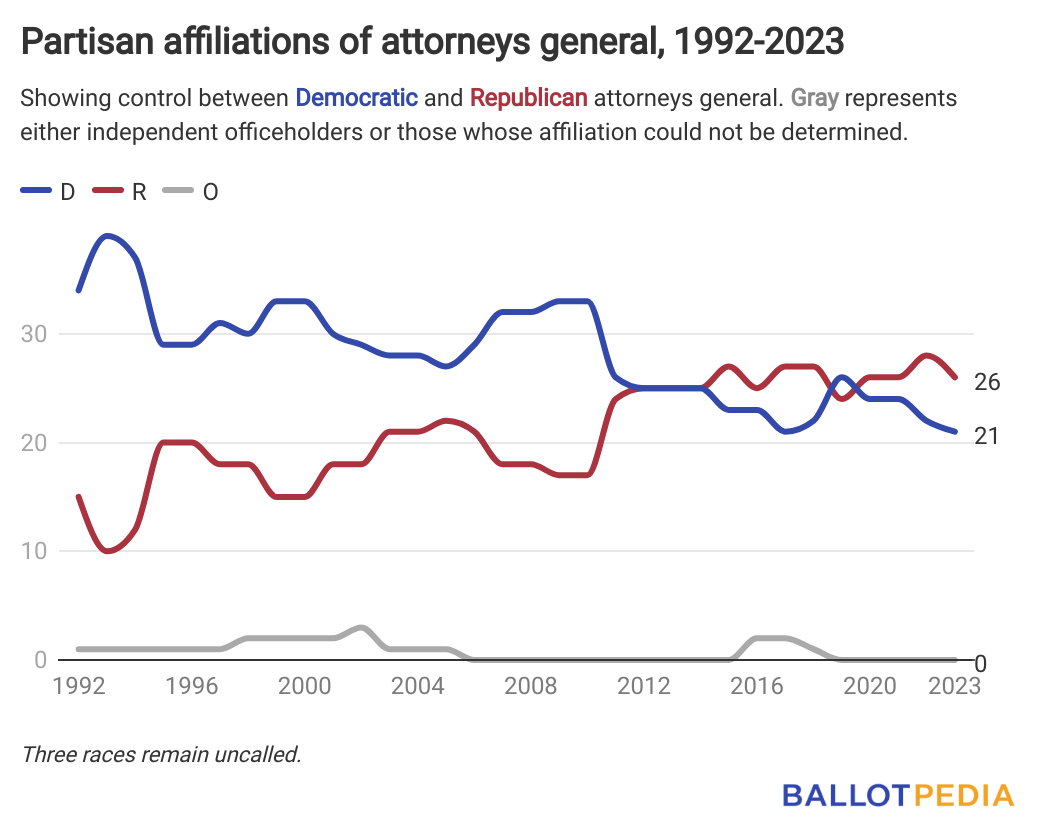 Key takeaway: Democrats gain control of one secretary of state office so far.

Heading into the election, Democrats controlled 20 secretaries of state offices, while Republicans controlled 27. The position does not exist in Alaska, Hawaii and Utah. Voters decided who would control 35 of the country’s 47 secretary of state offices yesterday. Twenty-seven offices were up for election, and eight offices’ appointment authorities were on the ballot.

Five offices remain uncalled: the Democratic-controlled offices in Arizona, Washington, and Wisconsin, and the Republican-controlled office in Nevada. New Hampshire’s secretary of state, elected jointly by both chambers of the state legislature, is also unknown.

The high water mark for a party controlling secretary of state offices since 1992 was in 2017 when there were 30 Republican secretaries.

Here’s how Republicans did: Republicans gained at least four offices that Democrats currently control, defeating two incumbents in the process.

Here’s how Democrats did: Democrats gained full appointment authority over two offices: Massachusetts, where a Republican appointee’s term is expiring, and Minnesota, where the current appointee’s affiliation is unclear.

The table below shows partisan control before and after the election for all 105 state financial officerships, including those that were not decided yesterday.

One area to watch moving forward with respect to these offices: the investment of state funds and environmental, social, and corporate governance (ESG).

Twenty-nine of the 38 offices decided last night are responsible for investing state funds. The map below shows all 38 states where SFOs have that responsibility.

Although several U.S. Senate races remain uncalled as of the time of this writing, we now know one thing for sure—election season just got a little longer. On Nov. 9, Georgia election officials declared that incumbent U.S. Sen. Raphael Warnock (D) and Herschel Walker (R) would advance to a Dec. 6 runoff election because neither candidate received more than 50% of the vote.

Including the 2021 runoffs, four Senate runoffs have taken place in Georgia. In 2008, Saxby Chambliss (R) won re-election in a runoff. The first Senate runoff occurred in 1992. Incumbent Wyche Fowler (D) lost in the runoff.

Read more about the Dec. 6 runoff at the link below.