Welcome to the Friday, November 11, Brew.

Election Day was three days ago, and as of this writing, many races up and down the ballot remain uncalled. But unlike the past few days (and nights!), the pace of updates has begun to slow as the number of uncalled races has fallen. As time passes, we’ll know the outcome of more and more races, though some may remain unknown for weeks.

You can learn more about how states report and certify election results, and what happens when candidates dispute their results or request a recount, at our Election Help Desk.

For now, here are a few updates from elections for U.S. Senate, U.S. House, and governor’s offices as of 6:00 p.m. EST on Nov. 10. Yesterday, we looked at election results for state legislatures, state financial officers, state supreme courts, secretaries of state, and attorneys general.

There were 35 U.S. Senate seats up for election this year, with Democrats holding 14 and Republicans holding 21.

Partisan control of the chamber has not yet been determined, in part because races in Arizona, and Nevada remain uncalled (Alaska’s U.S. Senate election is also uncalled at this time, but the two candidates in the ranked-choice runoff with the most votes are Republicans, including the incumbent, Sen. Lisa Murkowski). The U.S. Senate election in Georgia is headed to a Dec. 6 runoff because neither U.S. Sen. Raphael Warnock (D) nor Herschel Walker (R) received more than 50% of the vote (more about that runoff below).

All 435 U.S. House districts were up for election, and Democrats held a 220-212 majority with three vacancies at the time of the election. Republicans needed to gain a net of five districts to win a majority. Partisan control of the chamber is currently unknown because, according to our race calling policy, 39 races remain uncalled. 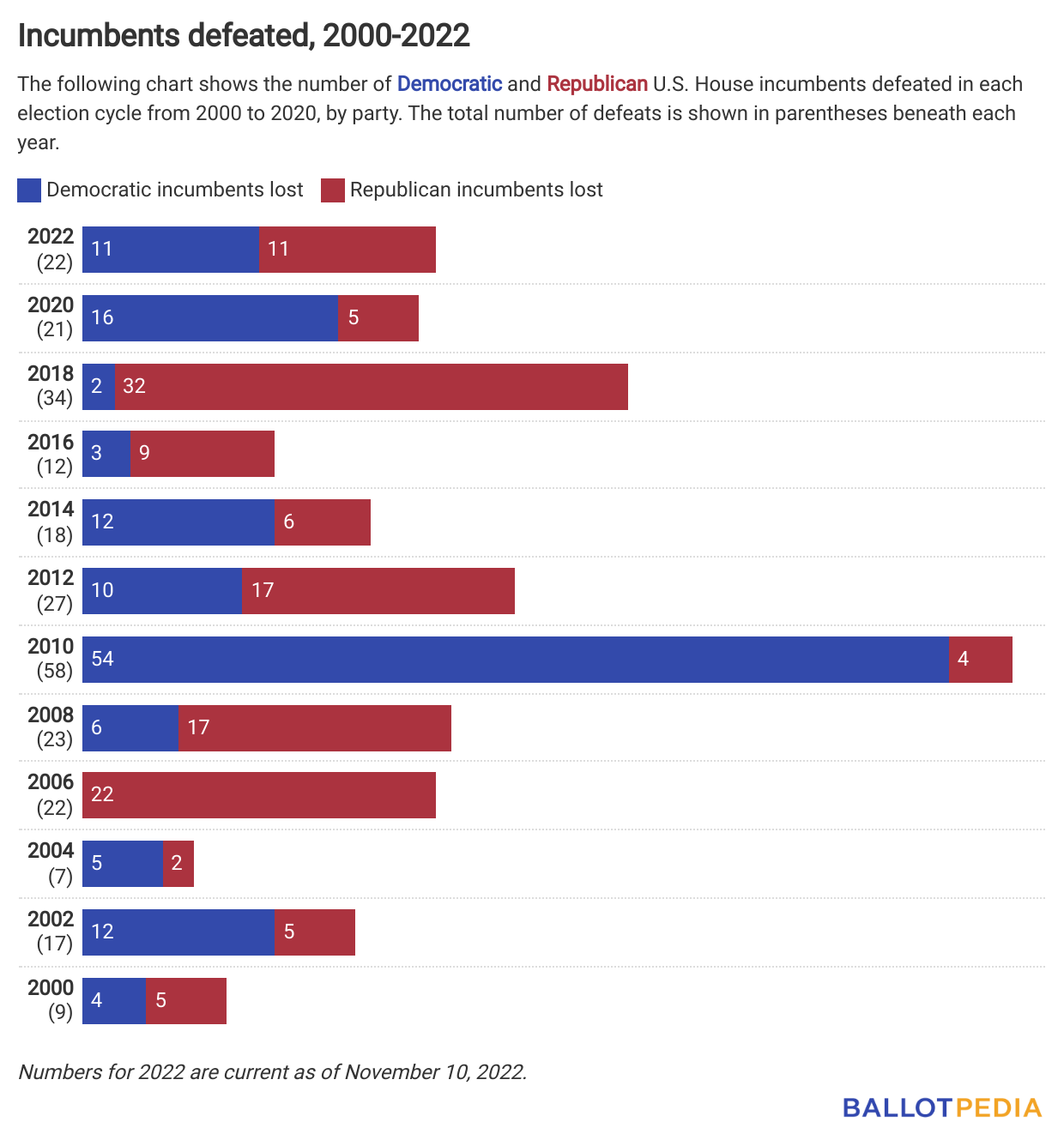 So far this year, 15 U.S. House districts have switched party hands as a result of the general elections. The table below shows pre- and post-election partisan control for each district. The table does not include special elections. Not all incumbents listed below were on the ballot on Nov. 8 because of retirements or primary defeats.

Thirty-six states held elections for governor, including 20 with a Republican governor and 16 with a Democratic governor going into the elections. The gubernatorial elections in Alaska, Arizona, Nevada, and Oregon remain uncalled. Of the races already called, two states—Maryland and Massachusetts—saw partisan control change from Republican to Democrat.

Here are a few recent updates:

You can follow along with all of our election updates and coverage at the link below.

Here’s a look at what we know about ballot measures related to abortion, marijuana, voting, and firearms.

There were six ballot measures addressing abortion—the most on record for a single year. Before 2022, the highest number of abortion-related measures in a single year was four in 1986.

Voters in Iowa and Oregon decided on ballot measures related to firearms.

Click here to watch our Nov. 10 webinar summarizing what happened on the ballot measure front with Editor in Chief, Geoff Pallay, and Managing Editor for Ballot Measures, Ryan Byrne.

Follow updates and learn more about ballot measures results at the link below.

Control of the U.S. Senate could come down to Georgia—like in 2021

As we mentioned in yesterday’s edition of the Daily Brew, the Georgia U.S. Senate election is headed to a runoff on Dec. 6. In Georgia, the two top finishers advance to a runoff if no candidate receives more than 50% of the vote—something neither incumbent U.S. Sen. Raphael Warnock (D) nor Herschel Walker (R) did. As of this writing, Warnock (D) leads Walker (R) 49.4% to 48.5%. Libertarian Chase Oliver (L) has 2.1%.

Depending on what happens in outstanding races in Arizona and Nevada, the outcome of the runoff could determine control of the U.S. Senate.

In 2020, Georgia held two elections for the U.S. Senate. In the regular election, incumbent U.S. Sen. David Perdue (R) and Jon Ossoff (D) advanced to a runoff after neither received the votes to win the general election outright. In the special election to replace U.S. Sen. Johnny Isakson (R), Incumbent Kelly Loeffler (R)—whom Gov. Brian Kemp (R) appointed to fill the vacancy created when Isakson retired—and Warnock advanced to a runoff for the same reason.

Republicans have controlled the state Senate since 2003 and the state House since 2005, and Georgia has elected Republican governors since 2004.

Including the 2021 runoffs, four Senate runoffs have taken place in Georgia. In 2008, Saxby Chambliss (R) won re-election in a runoff. The first Senate runoff occurred in 1992. Incumbent Wyche Fowler (D) lost in the runoff to Paul Coverdell (R).

You might have noticed that, last time, the runoff elections were scheduled for Jan. 5, but this year’s runoff is scheduled for Dec. 6. That’s because on March 25, 2021, Gov. Kemp signed Senate Bill 202, an election administration law. One of the changes in the law shortened the time between a general election and a runoff:

“In instances where no candidate receives a majority of the votes cast, a run-off primary, special primary runoff, run-off election, or special election runoff between the candidates receiving the two highest numbers of votes shall be held. Unless such date is postponed by a court order, such runoff shall be held on the twenty-eighth day after the day holding the preceding general or special primary or general or special electron.”

Previously, state law specified nine weeks between a general election and a runoff.

We’ll keep you updated on the latest news surrounding the Dec. 6 runoffs. Click the link below to learn more.