Welcome to the Tuesday, January 3, Brew.

Happy New Year, and welcome to 2023! We hope you found time to relax and enjoy the holidays. What better way to start the year than to look back at local ballot measures from 2022.

Twenty (5.23%) of those measures were citizen initiatives—meaning supporters mounted petition drives to get the questions on the ballot. Local legislative bodies—such as city councils and school boards—referred the other 362 (94.76%) measures to the ballot. 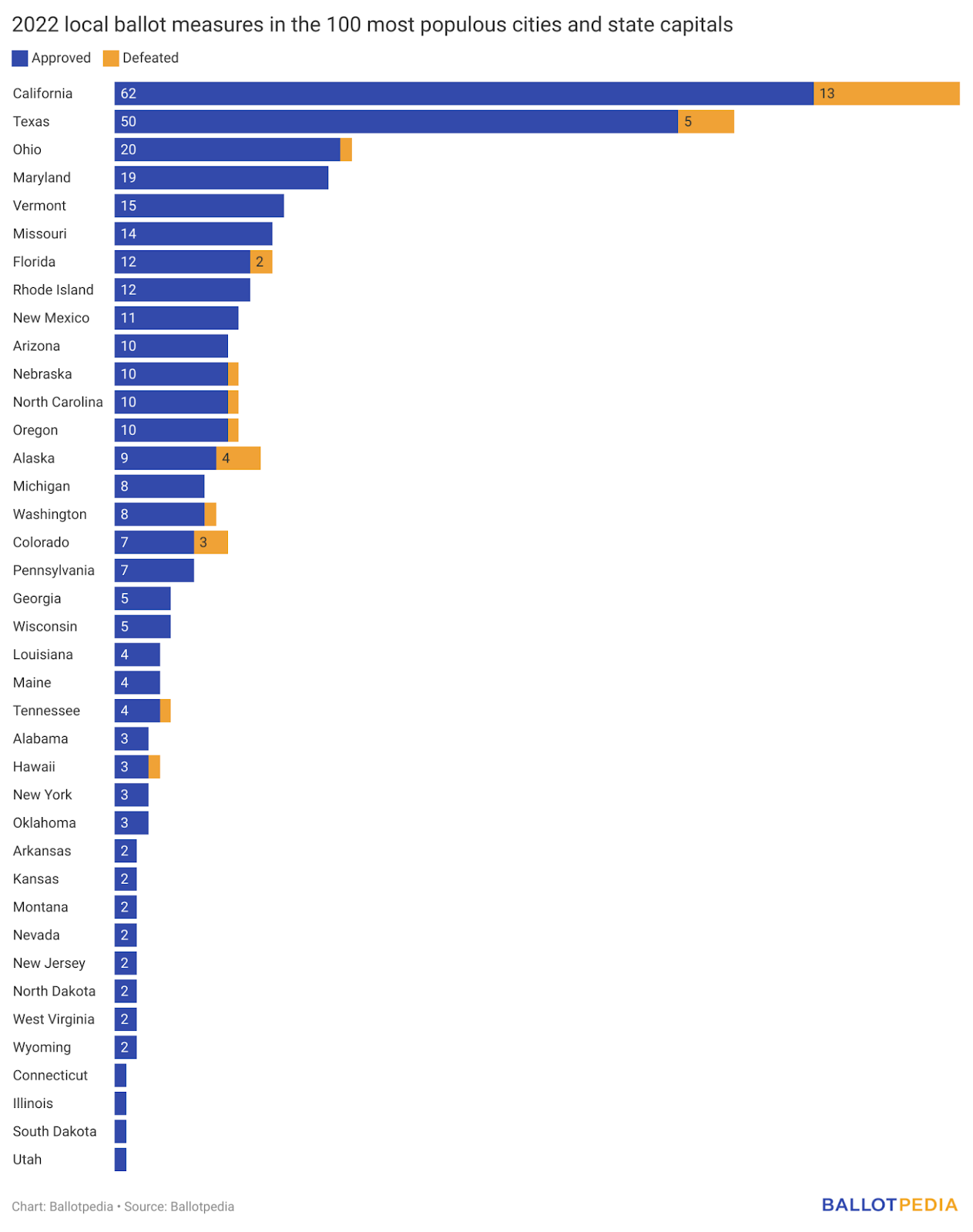 The 2022 local ballot measures addressed a variety of topics, from bond issues and taxes to local marijuana and local housing:

We also covered thirteen local ballot measures in California, Colorado, Florida, and Washington Washington that would move municipal election dates from odd to even-numbered years to coincide with statewide elections. All of those were approved. Voters in Portland, Oregon, and Seattle, Washington, approved measures to adopt ranked-choice voting for certain elections.

To learn more about last year’s local ballot measures, click the link below.

One of the year’s first elections will take place in Virginia.

Although new state legislative maps take effect on Jan. 11, 2023, at the start of the legislative session, this special election will take place under previous district lines. According to Daily Kos’ David Nir, District 7 “has been very swingy: In 2019, Kiggans won it by less than one point, while Joe Biden carried it by 10 points the following year, only to see Youngkin prevail by 4 points in 2021.”

Rouse, a former NFL player, has been an at-large member of the Virginia Beach City Council since 2018. Rouse said, “so much is at stake in this upcoming election, from a woman’s fundamental right to choose, which I will fiercely defend, to the efforts that will set us back on voting rights, to addressing climate change, protecting the Chesapeake Bay and waterways, to criminal justice reform.” Rouse listed education as his top priority, including raising teacher salaries and expanding access to preschool. Rouse also listed the economy, healthcare, and public safety as priorities.

Adams is a retired U.S. Navy lieutenant commander who founded and operated a handyman business. Adams said he will “continue working to pass Governor Glenn Youngkin’s pro-veteran agenda, cut taxes, ease regulations, keep our communities safe, and make it easier for small business owners like me to get started and stay in business.” Adams’ platform includes working to improve education and workforce training, supporting veterans, lowering gas, grocery, and sales taxes, and growing “school funding while shrinking the power of left-wing idealogues.”

Abortion has been an issue in the race. Planned Parenthood Advocates of Virginia endorsed Rouse, and its associated PAC is spending around $100,000 on the race. Susan B. Anthony Pro-Life America is spending $30,000 in support of Adams.

Twenty-four of the 100 most populous U.S. cities held mayoral elections in 2022. Mayoral offices changed partisan control in four of those races, resulting in no net change in the number of offices held by Republicans and Democrats. Once all mayors elected in 2022 are sworn in, Democrats will hold 62 top-100 mayoral offices, Republicans will hold 26, independents will hold three, and nonpartisan mayors will hold seven. One current mayor and one mayor-elect have not responded to our inquiries about their partisan affiliation.

Mayoral offices in the following cities flipped as a result of 2022 elections: