Welcome to the Monday, January 23, Brew.

On April 4, Wisconsin voters will decide a closely watched state supreme court election and three ballot measures. The measures include two constitutional amendments and one advisory question. The supreme court election will determine ideological control of the court, which is currently considered to have a 4-3 conservative majority.

The constitutional amendments relate to the conditions of release for an accused individual before conviction and cash bail. The two questions were referred to the ballot with the final passage of Senate Joint Resolution 2 (SJR 2) on Jan. 19. The legislature also voted to place an advisory question on the April ballot. It asks: “Shall able-bodied, childless adults be required to look for work in order to receive taxpayer-funded welfare benefits?”

Wisconsin has a divided government. Republicans control the state House and Senate, while a Democrat serves as governor.

According to Wisconsin Public Radio’s Shawn Johnson, “The potential political benefit for Republicans is that the referendum questions they’ve chosen could appeal to voters who may otherwise be unlikely to cast ballots for the officially nonpartisan, sometimes low-key office of supreme court justice.”

In Wisconsin, a majority vote in two successive legislative sessions is required to approve an amendment for the amendment to appear on the ballot. Wisconsin is one of 13 states with a two-session requirement for legislatively referred constitutional amendments (in four of those states, an amendment that receives a supermajority in the first round can bypass the second).

Wisconsin voters last amended this section of the state constitution in April 1981 with the passage of Question 3. The amendment permitted the legislature to allow courts to deny, revoke, or set terms of bail. It was approved by a vote of 73.15% to 26.85%.

Between 1985 and 2022, 18 measures appeared on odd-numbered year ballots in Wisconsin. Eleven measures were approved and seven were defeated. The last spring odd-year election to include a ballot measure in Wisconsin was in 2015. Voters approved a measure allowing majority of supreme court justices to elect a chief justice..

Since Jan. 13, 236 election-related bills have been introduced (or saw pre-committee action). That represents a 7.4 percent decrease from last week’s total of 256 bills.

To date, we have tracked 808 election-related bills in 2023. These bills were either introduced this year or crossed over from last year’s legislative sessions.

If you want to learn more about election-related legislation, click the link below and subscribe to our weekly election legislation tracking digest. You’ll receive weekly updates on election-related activity across the states, including information about noteworthy bills, the number of bills acted on within a given week, and which states have seen the highest concentration of legislative activity. You can also use our interactive Election Administration Legislation Tracker to find and read election-related bills in your state.

An update on last week’s additions to the Federal Register

Now that we’ve talked about state legislatures, let’s take a look at what’s happening in D.C.

The Federal Register is a daily journal of federal activity. The 1935 Federal Register Act created the journal to centralize and standardize the public release of federal government information. The journal includes presidential documents, proposed and final rules, and public notices, and is a common measure of an administration’s regulatory activity. 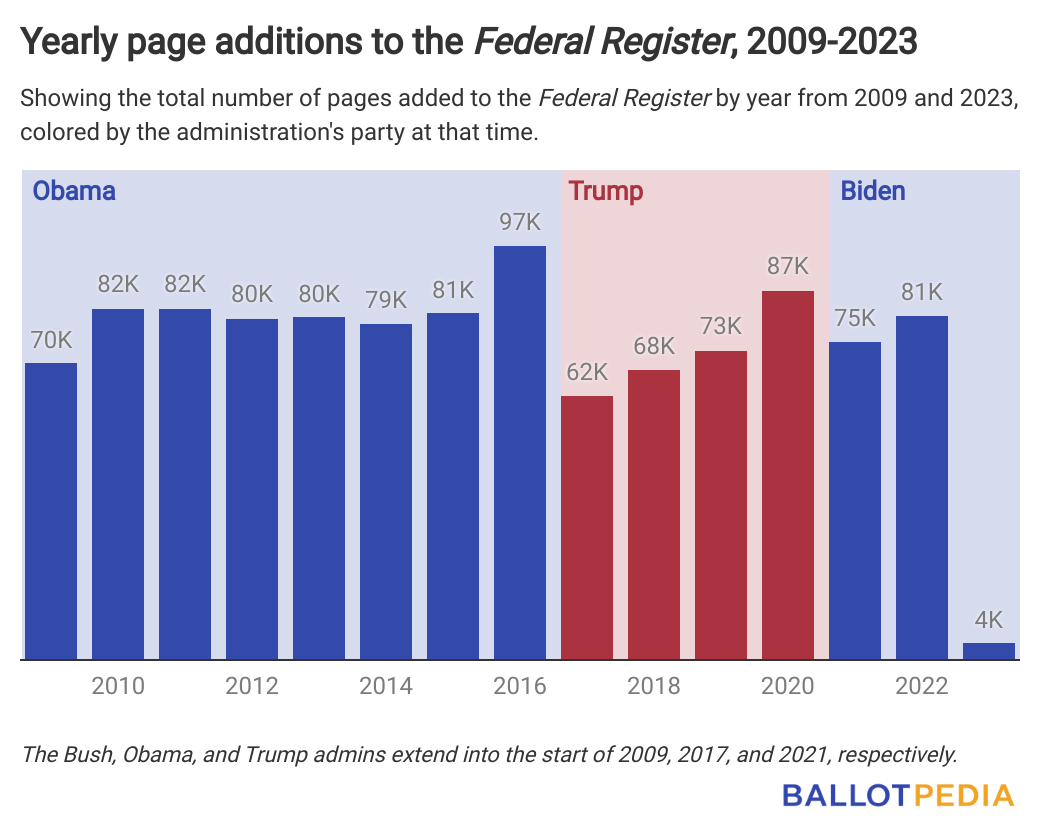 Ten rules—three proposed and seven final—were deemed significant under E.O. 12866. A rule is defined as significant if it has the potential to have large effects on the economy, environment, public health, or state or local governments. One of the significant proposals concerns revisions to regulations under the Black Lung Benefits Act regarding authorization of self-insurers from the Workers’ Compensation Programs Office. One of significant final rules concerns amendments to medical regulations regarding emergent suicide care from the Veterans Affairs Department.

Significant actions may conflict with presidential priorities or other agency rules. The Biden administration has issued 21 significant proposed rules, 13 significant final rules, and one significant notice as of Jan. 20.

We maintain page counts and other information about the Federal Register as part of our Administrative State Project. The project is a neutral, nonpartisan encyclopedic resource that defines and analyzes the administrative state, including its philosophical origins, legal and judicial precedents, and scholarly examinations of its consequences. The project also monitors and reports on measures of federal government activity.Click below to find more information about weekly additions to the Federal Register in 2022, 2021, 2020, 2019, 2018, and 2017.