The organizers of recall efforts targeting Colorado state Sen. Pete Lee (D) and state Sen. Brittany Pettersen (D) notified the secretary of state’s office on September 10 that they would not be turning in signatures for either recall effort. Recall organizers had until September 10 to turn 11,304 signatures for the Lee recall and until September 16 to turn in 18,376 signatures for the Pettersen recall.
Both Sen. Lee and Sen. Pettersen were targeted for recall because of their support of the same four bills during the 2019 legislative session. The legislation was related to firearms, oil and gas, the national popular vote, and sex education.
The state Senate’s president, Leroy Garcia (D), is also facing an official recall due to similar legislation. The signatures for that recall are due on October 18.
Gov. Polis (D), Rep. Rochelle Galindo (D), and Rep. Tom Sullivan (D) all faced recall campaigns in 2019 due to the same legislation as Lee and Pettersen, but none of the three recall efforts reached the ballot. The Polis recall ended on September 6 after supporters failed to submit the required number of signatures. The recall targeting Galindo ended after she resigned in May 2019. The recall targeting Sullivan ended in June 2019 after recall supporters abandoned the effort.
Since 2011, 85 recall petitions have been filed against state lawmakers. Nine recalls were successful, nine were defeated at the ballot, 58 did not go to a vote, and nine are still ongoing. California state Sen. Josh Newman (D) was recalled in 2018. Two Colorado state senators were successfully recalled in 2013.
Colorado became a Democratic trifecta in 2019 after Democrats flipped the state Senate in the 2018 elections. Democrats control the state House by a 41-24 margin and the state Senate by a 19-16 margin. A state government trifecta exists when one political party simultaneously holds the governor’s office and both state legislative chambers.
Additional reading:
https://ballotpedia.org/Pete_Lee_recall,_Colorado_State_Senate_(2019)
https://ballotpedia.org/Brittany_Pettersen_recall,_Colorado_State_Senate_(2019)
https://ballotpedia.org/Colorado_State_Senate 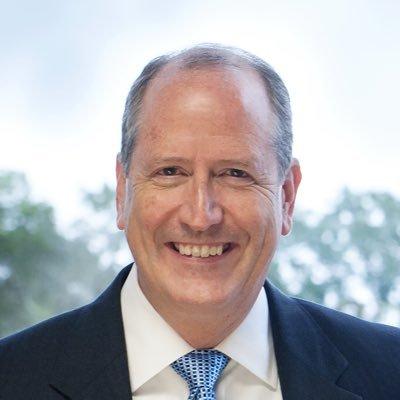 State Sen. Dan Bishop (R) defeated Dan McCready (D), Jeff Scott (L), and Allen Smith (G) in North Carolina’s 9th Congressional District special election on September 10, 2019. Bishop received 50.8% of the vote to McCready’s 48.6% with 99% of precincts reporting, in addition to early voting results. The state board of elections called the special election following allegations of absentee ballot fraud in the 2018 race.
As of September 6, the special election had seen more than $10.7 million in satellite spending, the second-highest total for a U.S. House special election (Georgia’s 6th Congressional District special election in 2017 saw $27 million spent by satellite groups). McCready’s campaign raised $5 million to Bishop’s $2 million through August 21.
Throughout the race, Bishop highlighted his support for President Donald Trump (R), who endorsed and campaigned for Bishop, and sought to connect McCready to Democrats in Congress such as Ilhan Omar and Alexandria Ocasio-Cortez, who Bishop called radical socialists. Bishop described himself as a “pro-life, pro-gun, pro-wall” conservative.
McCready emphasized his plan to lower prescription drug prices and criticized Bishop’s voting record on the issue. McCready said he would “always put country over party” and pursue bipartisan legislation on healthcare, taxes, and education. He was endorsed by former Vice President Joe Biden (D).
Trump won the 9th District by 12 percentage points in 2016. In the uncertified results of the 2018 House race, Republican candidate Mark Harris led McCready by 905 votes.

State Rep. Greg Murphy (R) defeated Allen Thomas (D), Tim Harris (L), and Greg Holt (Constitution Party) in the special election for North Carolina’s 3rd Congressional District seat in the U.S. House of Representatives on September 10, 2019. Murphy received 60.6% of the vote to Thomas’ 38.6% with 82% of precincts reporting, in addition to early voting results.
The special election was called after former incumbent Rep. Walter Jones (R) died on February 10, 2019.
Murphy campaigned on his support of President Trump and highlighted his work as a physician and state legislator. Thomas emphasized economic development, small-town revitalization, and improving access to healthcare in his campaign.
According to campaign finance reports through August 21, Murphy raised $902,000 and spent $803,000, and Thomas raised $565,000 and spent $476,000. In the 2016 presidential election, Trump won the district with 61% of the vote. 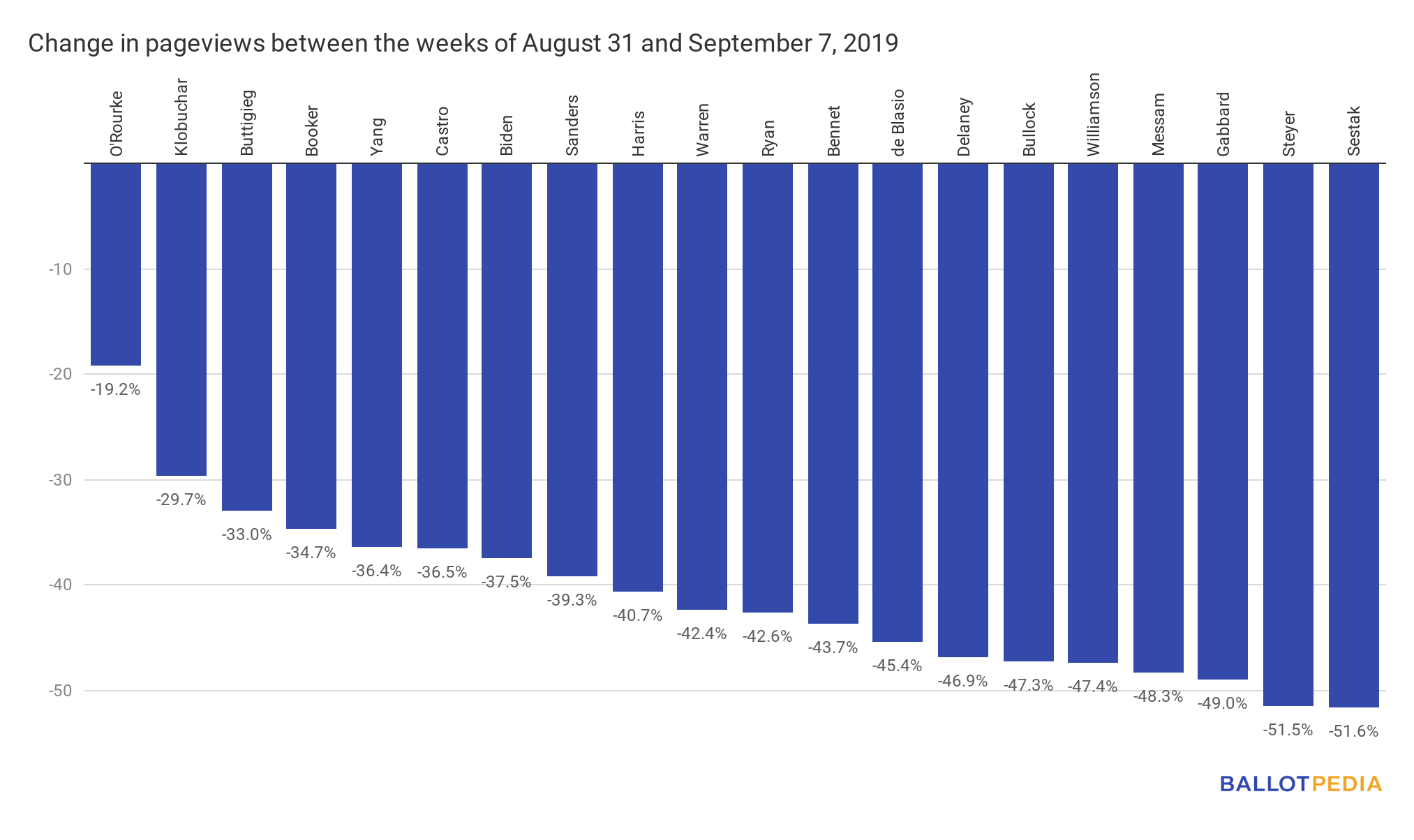 In Boise, Idaho, 18 candidates filed to run for four nonpartisan city offices on the November 5 general election ballot. The position of mayor and three of the city council’s six seats are up for election. The candidate filing deadline passed on September 6, and the withdrawal deadline is September 20.
The mayoral election attracted the most candidates with seven filed, including incumbent David Bieter, who was first elected to the office in 2003. Though the mayor’s office is nonpartisan, Bieter is affiliated with the Democratic Party. He served as the Democratic representative of District 19 in the Idaho House of Representatives from 1999 to 2003.
District 1 city council incumbent Lauren McLean filed to run for mayor rather than for re-election to her current seat, leaving it open for a newcomer. Six candidates filed to run for that seat. The District 3 seat was also left open for a newcomer since incumbent Scot Ludwig did not file for re-election. Two candidates filed to run for that seat. In District 5, incumbent Elaine Clegg faces two challengers in her bid for re-election.
Boise is the largest city in Idaho and the 97th-largest city in the U.S. by population.
Additional reading:
https://ballotpedia.org/Mayoral_election_in_Boise,_Idaho_(2019)
https://ballotpedia.org/Largest_cities_in_the_United_States_by_population
https://ballotpedia.org/Partisanship_in_United_States_municipal_elections_(2019)

The Supreme Court is currently in recess. The 2019-2020 term begins Oct. 7. Click here to read more about SCOTUS’ upcoming term. 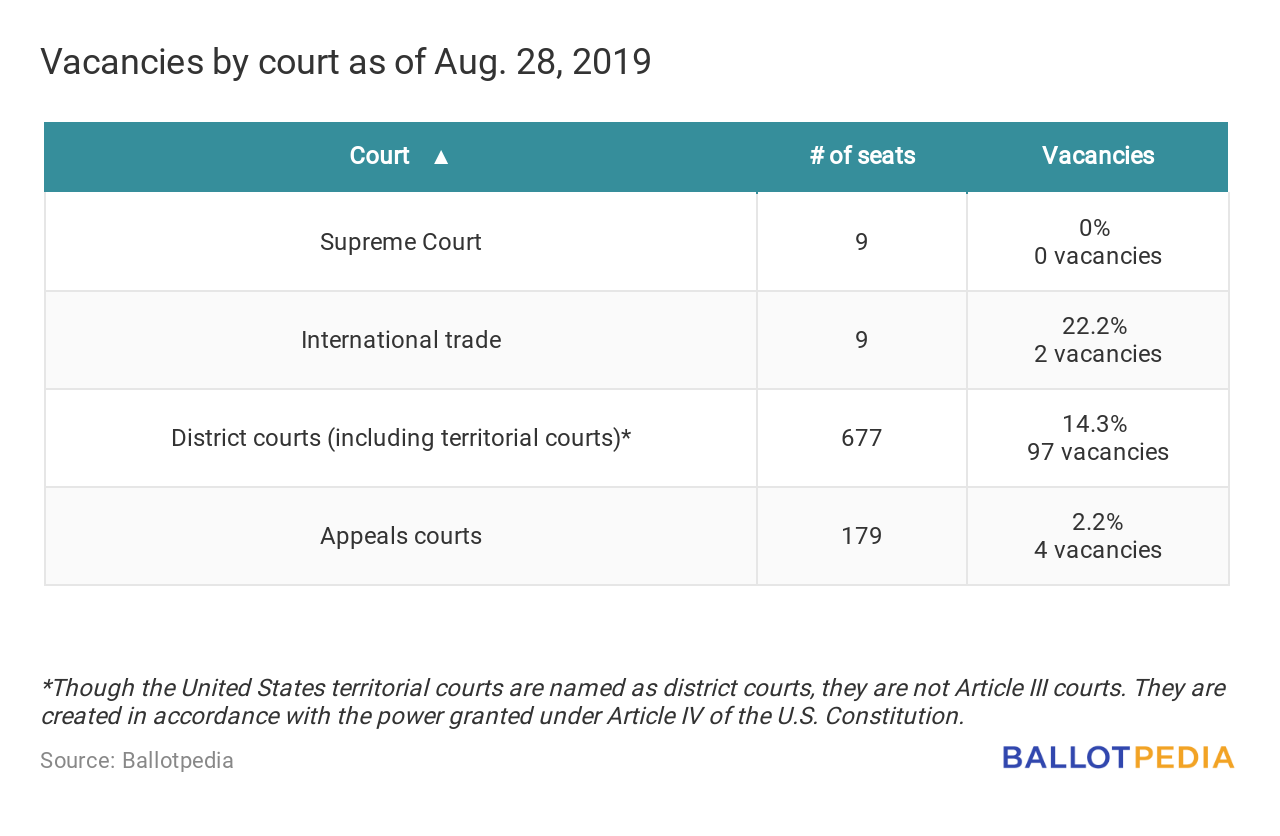 One judge left active status, creating an Article III vacancy. As an Article III judicial position, this vacancy must be filled by a nomination from the president. Nominations are subject to Senate confirmation. 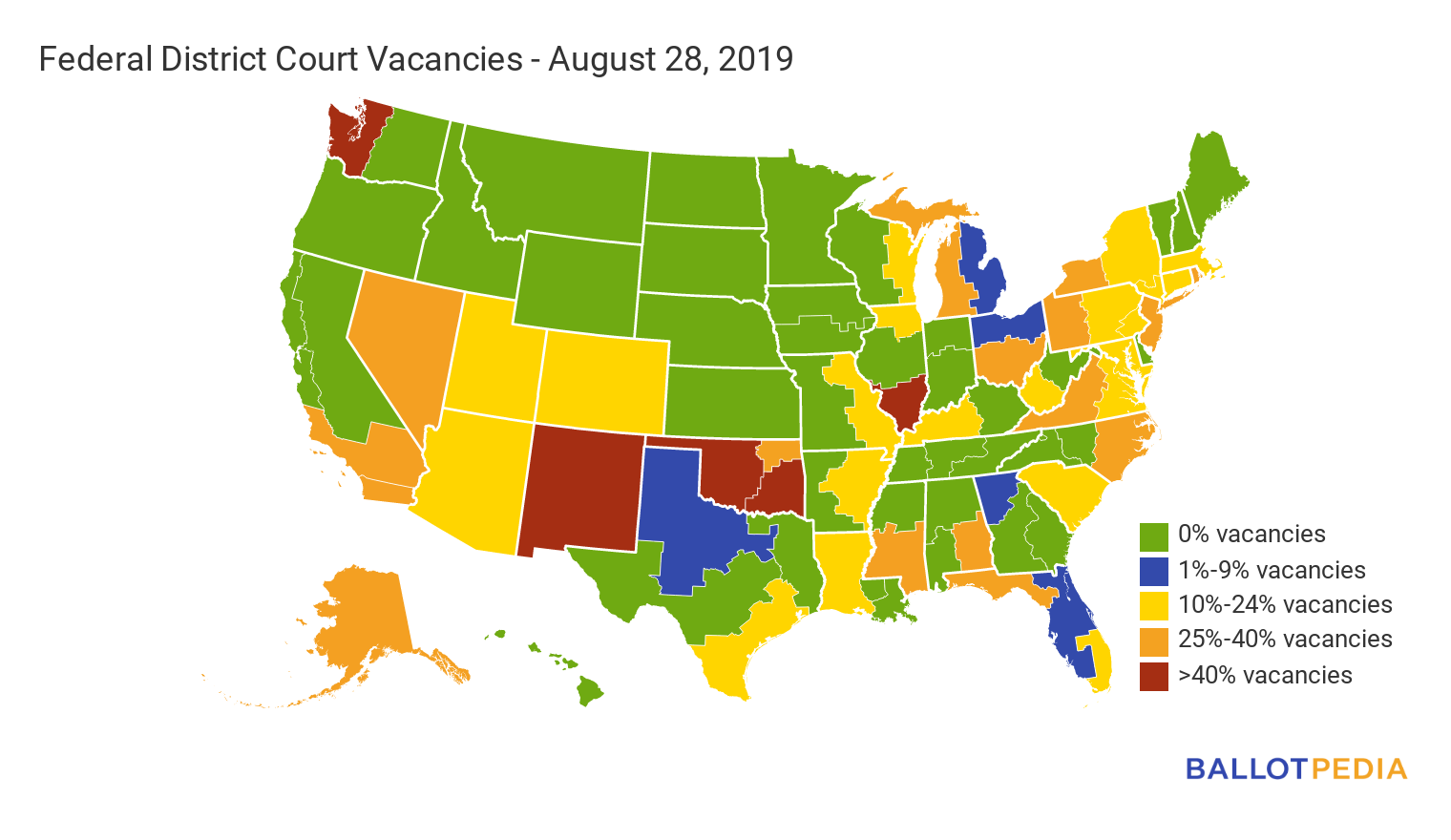 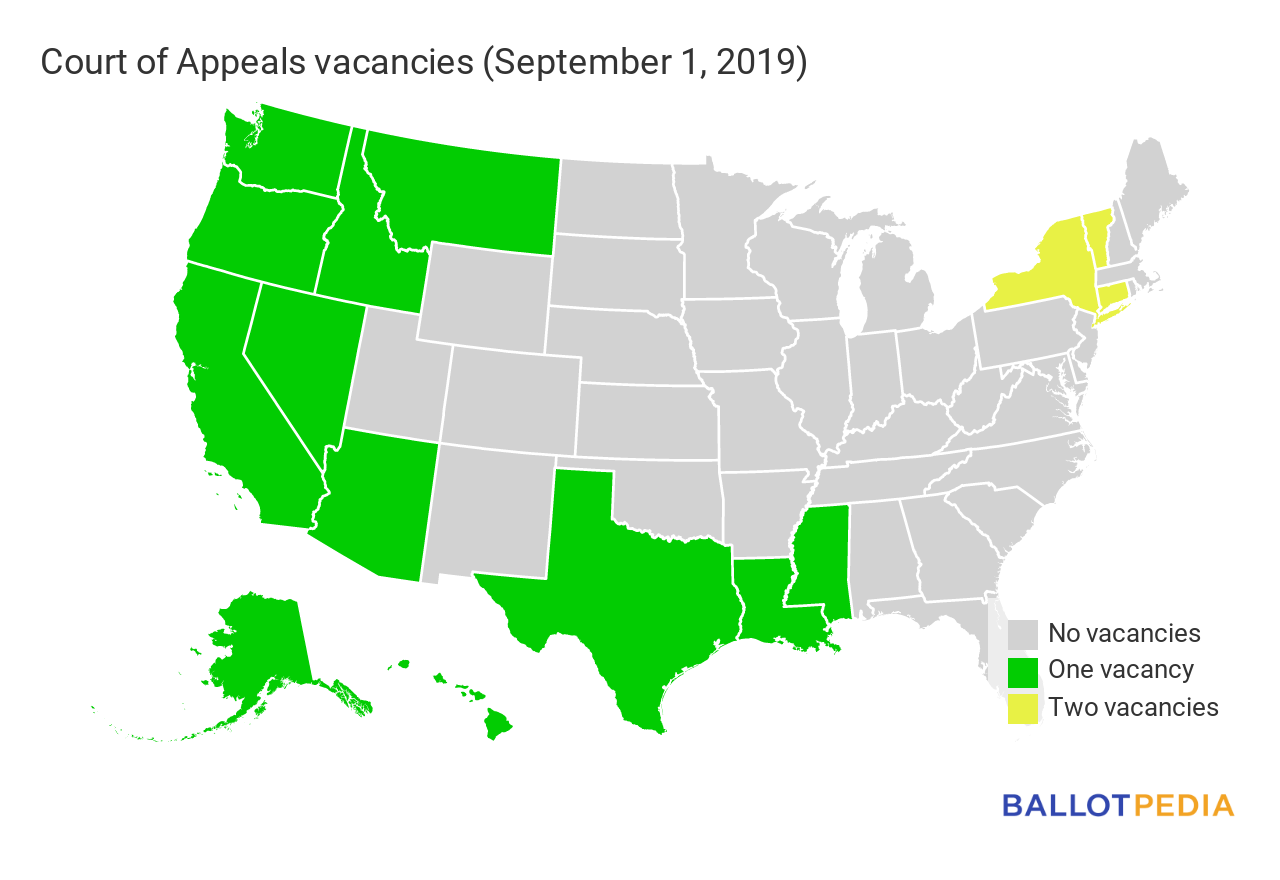 Since July 31, 2019, the Senate confirmed two of the president’s nominees to Article III courts.

Since January 2017, the Senate has confirmed 146 of President Trump’s judicial nominees—99 district court judges, 43 appeals court judges, two Court of International Trade judges, and two Supreme Court justices. This is the second-most Article III judicial confirmations through this point in a presidency since Theodore Roosevelt. Only Bill Clinton, with 165 judicial appointments, had more.