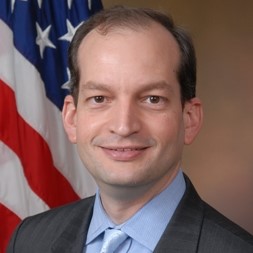 U.S. Secretary of Labor R. Alexander Acosta announced he would resign from his cabinet position, effective July 19.
President Trump nominated Acosta to serve as Secretary of Labor on February 16, 2017. Acosta was confirmed by the Senate on April 27, 2017, and sworn in the following day. Deputy Secretary of Labor Pattrick Pizzella will succeed Acosta as acting secretary.
Acosta said that he didn’t want his approval of a non-prosecution agreement with financier Jeffrey Epstein in 2008 to overshadow the achievements of the President and the Department of Labor. While serving as a U.S. attorney in Florida, Acosta agreed to the agreement under which Epstein served 13 months in county jail. On July 6, Epstein was arrested and charged with sex trafficking of minors and conspiracy to commit sex trafficking of minors from 2002 to 2005.
Acosta said he had struck the agreement after a state grand jury recommended a charge which would bring a more lenient sentence for Epstein and added that the full extent of Epstein’s alleged crimes was not known at the time. A district court judge ruled in February 2019 that the agreement had violated the Crime Victims Rights Act since Epstein’s alleged victims had not been informed in advance.
Additional reading:
https://ballotpedia.org/U.S._Department_of_Labor
https://ballotpedia.org/Donald_Trump_presidential_Cabinet