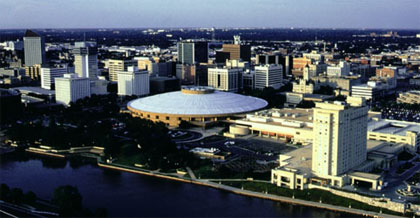 Nonpartisan primaries are scheduled on August 6 for mayor and one school board seat in Wichita, Kansas. The mayoral race features nine candidates, including incumbent Jeff Longwell. Although the position is nonpartisan, Longwell is affiliated with the Republican Party. He was first elected as mayor on April 7, 2015, with 59.4% of the vote. In the Wichita Public Schools Board of Education at-large race, incumbent Sheril Logan faces three opponents. Logan was first elected in 2011. The general election for both races is on November 5, and their candidate filing deadline passed on June 3.
Three city council seats could have also been on the primary ballot, but three or fewer candidates filed for each of the positions. The primaries were canceled and all candidates who filed automatically advanced to the November 5 general election. District 2 incumbent Becky Tuttle and District 4 incumbent Jeff Blubaugh each face two opponents, while District 5 incumbent Bryan Frye has one opponent.
Two school board seats in Wichita Public Schools also had their primaries canceled. District 3 incumbent Ernestine Krehbiel is running unopposed for re-election, while District 4 incumbent Stan Reeser faces one opponent in the November 5 general election. The school board has seven members, six of whom are elected to represent specific districts and one of whom is an at-large representative.
Wichita is the largest city in Kansas and the 48th-largest city in the U.S. by population. Wichita Public Schools served 50,600 students during the 2016-2017 school year.
Additional reading:
https://ballotpedia.org/City_elections_in_Wichita,_Kansas_(2019)
https://ballotpedia.org/Wichita_Public_Schools,_Kansas,_elections_(2019)
https://ballotpedia.org/Partisanship_in_United_States_municipal_elections_(2019)