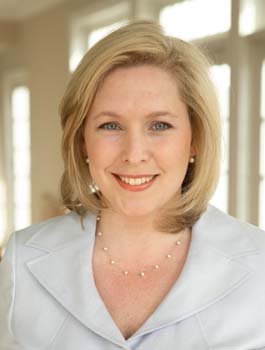 U.S. Sen. Kirsten Gillibrand (D-N.Y.) announced she was ending her campaign for the presidency in an interview with The New York Times Wednesday.
In a tweet announcing her withdrawal, Gillibrand said, “I am so proud of this team and all we’ve accomplished. But I think it’s important to know how you can best serve. To our supporters: Thank you, from the bottom of my heart. Now, let’s go beat Donald Trump and win back the Senate.”
Gillibrand is the seventh noteworthy Democratic candidate to suspend her bid for the presidency this year and the fifth to do so this month. Other August withdrawals include former U.S. Sen. Mike Gravel (D-Alaska), former Colorado Gov. John Hickenlooper (D), Washington Gov. Jay Inslee (D), and U.S. Rep. Seth Moulton (D-Mass.)
Gillibrand’s withdrawal leaves 20 noteworthy Democrats in the running. As of Monday, there were 277 Democratic presidential candidates registered with the Federal Election Commission.
Additional reading:
https://ballotpedia.org/Timeline_of_announcements_in_the_presidential_election,_2020
https://ballotpedia.org/Presidential_candidates,_2020
https://ballotpedia.org/Kirsten_Gillibrand