One measure is currently certified to appear on the Florida 2020 ballot. Proponents of six measures have collected enough signatures (76,632) to trigger ballot language reviews. Proponents of the $15 Minimum Wage Initiative are about 5,000 signatures away from the 766,200 total required signatures, but also need to meet the state’s distribution requirement.
On Sept. 19, the Florida Division of Elections reported that the Citizen Requirement for Voting Initiative had qualified for the November 2020 ballot. The measure is sponsored by Florida Citizen Voters and has the support of the national Citizen Voters Inc. Florida Citizen Voters submitted 927,662 valid signatures. To qualify the measure for the ballot, 766,200 valid signatures were required. The measure was originally Initiative #18-14 and will appear on the ballot as Amendment 1.
This measure would amend the Florida Constitution to state that only citizens of the United States are qualified electors in Florida.
Proponents of six citizen initiatives in Florida have submitted enough valid signatures to trigger a ballot language review by the state supreme court. Sponsors must submit 76,632 valid signatures (10% of the number of signatures required statewide coming from at least seven of Florida’s congressional districts) to trigger a ballot language review by the state supreme court concerning whether or not the measure complies with the single-subject rule and whether or not the ballot title and summary are appropriate.
Proponents must submit a total of 766,200 valid signatures to qualify initiatives for the 2020 ballot. Signatures must be verified by February 1, 2020. Since state law gives the secretary of state 30 days to verify signatures, petitioners need to submit signatures on or before January 1, 2020, to guarantee that an initiative qualifies for the ballot in 2020.
Florida also has a signature distribution requirement, which requires that signatures equaling at least 8% of the district-wide vote in the last presidential election be collected from at least half (14) of the state’s 27 congressional districts. Petitioners are allowed to circulate an initiative for an indefinite period of time, but signatures are valid for a two-year period of time; therefore, proponents must collect all of their signatures for verification within a two-year period.
The list below shows which initiatives have enough signatures to trigger a ballot language review and how many signatures are currently valid statewide: 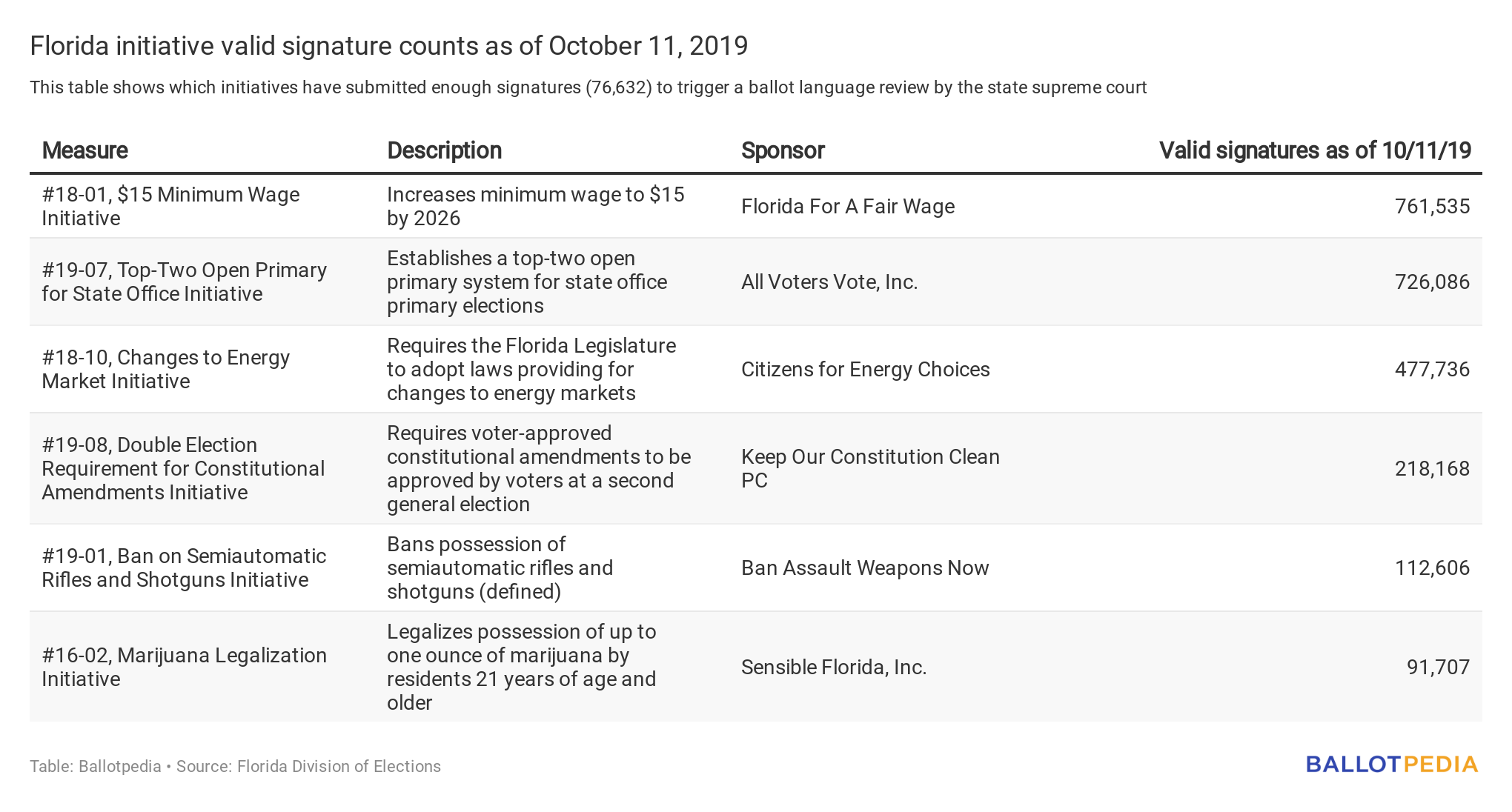 An additional 11 measures have been filed in 2018 and 2019 targeting the 2020 ballot in Florida, but proponents have not yet submitted enough valid signatures to trigger the supreme court ballot language review. Initiative #19-11, sponsored by Make It Legal Florida, was the most recent filed initiative and would legalize recreational marijuana. It was approved for signature gathering on September 9, 2019, and had 466 signatures unofficially reported as valid by the secretary of state as of October 11, 2019.
A total of 91 measures appeared on the statewide ballot in Florida between 1996 and 2018, with an average of between seven and eight measures appearing on the ballot during each even-numbered year. Between 1996 and 2018, 75.82% (69 of 91) of statewide measures were approved by voters and 24.18% (22 of 91) were defeated. In Florida, a 60% supermajority vote is required for the approval of a constitutional amendment.