Twas the night before arguments, and all through the court, not a brief was stirring, not even about tort; the robes were hung by the bench with care, in hopes that the justices soon would be there…

Welcome to the December 9 edition of Bold Justice, Ballotpedia’s newsletter about the Supreme Court of the United States (SCOTUS) and other judicial happenings around the U.S. While you settle your brains for a long winter nap, follow us on Twitter or subscribe to the Daily Brew to catch up on the latest political news.

On the Supreme Court’s traditional seal, how many stars are beneath the eagle’s claws?

The Senate has confirmed eight nominees since our December 2 issue.

President Trump has not announced any new Article III nominees since our December 2 edition. 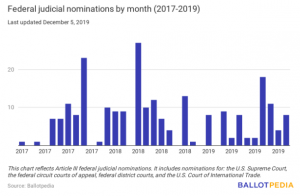 The federal judiciary currently has 97 vacancies. As of publication, there were 58 pending nominations.

The Senate Judiciary Committee has not reported any new nominees out of committee since our December 2 edition.

The District of Delaware has four authorized judgeships. There are currently no vacancies. The breakdown of current active judges by appointing president is:

Bold Justice will be back January 6 with more information on the federal judiciary.

… We sprang to the court, where the marshall said “oyez,” and arguments began for the day. But Ballotpedia exclaimed, ere the holidays were in sight, happy SCOTUS to all, and to all a good night!