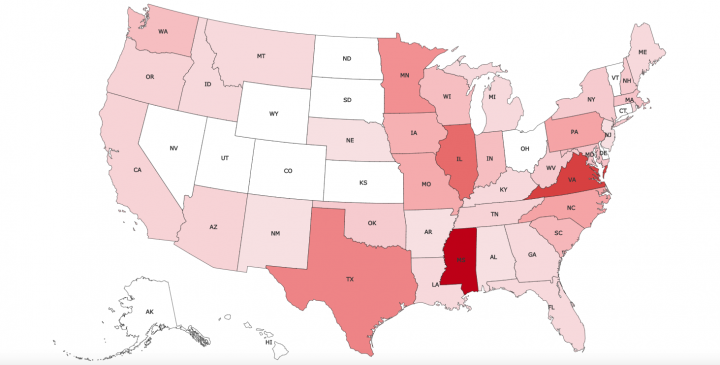 With the year drawing to a close, let’s take a look back at electoral policy legislation in the states in 2019.

The map below shows which states having taken up redistricting policy legislation this year. A darker shade of red indicates a greater number of relevant bills. 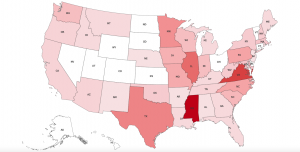 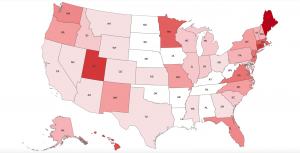 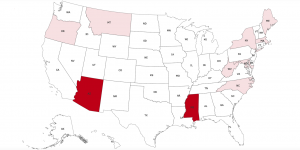 On Dec. 2, 2019, a three-judge panel of North Carolina’s state superior court ruled unanimously that U.S. House elections in 2020 will take place under a remedial map (depicted below) that state lawmakers adopted in November. The court had earlier ruled that the original map was an unconstitutional partisan gerrymander under state law. The court also ordered that the candidate filing period open immediately, having previously delayed the filing period pending consideration of the remedial map and the objections to it. 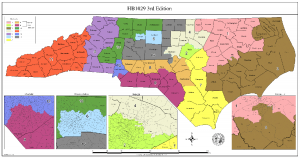 Click the above image to see a larger version of the remedial map.

How did this start? On Sept. 27, opponents of North Carolina’s congressional district plan filed suit, alleging that the district map enacted by the state legislature in 2016 constituted a partisan gerrymander in violation of state law. The plaintiffs asked that the court bar the state from using the maps in the 2020 election cycle. On Oct. 28,  the court granted this request, enjoining further application of the 2016 maps. In its order, the court wrote, “The loss to Plaintiffs’ fundamental rights guaranteed by the North Carolina Constitution will undoubtedly be irreparable if congressional elections are allowed to proceed under the 2016 congressional districts.” The court did not issue a full decision on the merits, stating that “disruptions to the election process need not occur, nor may an expedited schedule for summary judgment or trial even be needed, should the General Assembly, on its own initiative, act immediately and with all due haste to enact new congressional districts.” The same three-judge panel, comprising Judges Paul C. Ridgeway, Joseph N. Crosswhite, and Alma L. Hinton, struck down the state’s legislative district plan on similar grounds on Sept. 3.

What were the reactions to the remedial map? Democrats opposed the remedial plan and announced their intention to challenge it in court. Eric Holder, former U.S. Attorney General and chair of the National Democratic Redistricting Committee, said, “The congressional map passed by Republicans in the North Carolina legislature simply replaces one partisan gerrymander with a new one. This new map fails to respond to the court’s order by continuing to split communities of interest, packing voters in urban areas, and manipulating the district lines to provide Republicans with an unfair partisan advantage.” Rep. Patrick McHenry (R) dismissed Holder’s criticism: “Eric Holder and (former President) Barack Obama have raised a lot of money for this outcome, and they’ve pursued a really aggressive legal strategy for their partisan outcomes, and right now they’re calling it partisan gerrymandering, but what they’re seeking is partisan gerrymandering for the left. We basically have a Wild West of redistricting. This will be the fourth map in six cycles, and I think that is so confusing for voters and has a major negative impact on voters.”

What comes next? In 2020, North Carolina’s 13 seats in the U.S. House will be up for election. Heading into 2020, Republicans hold 10 of those seats, and Democrats hold the remaining three. In the wake of the court’s Dec. 2 order confirming the implementation of the remedial map in 2020, Kyle Kondik, managing editor of Sabato’s Crystal Ball, said via Twitter, “Not going to officially make NC House ratings changes until we know the new map is final, but here’s what’s tentatively coming: NC-2: Likely R to Safe D; NC-6: Safe R to Safe D; NC-8: Safe R to Likely R; NC-13: Likely R to Safe R. Ratings changes suggest a two-seat D net gain.”

On Nov. 21, 2019, the California Supreme Court ruled unanimously that SB27, which requires presidential candidates to file copies of their income tax returns with the California secretary of state in order to qualify for placement on the primary ballot, violates Article II, Section 5(c) of the state constitution. Article II, Section 5(c) states that “the Legislature shall provide for partisan elections for presidential candidates, and political party and party central committees, including an open presidential primary whereby the candidates on the ballot are those found by the Secretary of State to be recognized candidates throughout the nation or throughout California for the office of President of the United States, and those whose names are placed on the ballot by petition, but excluding any candidate who has withdrawn by filing an affidavit of noncandidacy.” Writing for the court, Chief Justice Tani Cantil-Sakauye, joined by Associate Justices Goodwin Liu, Mariano-Florentino Cuéllar, Carol Corrigan, Leondra Kruger, Ming Chin, and Joshua Groban, said, “The Legislature may well be correct that a presidential candidate’s income tax returns could provide California voters with important information. But article II, section 5(c) embeds in the state Constitution the principle that, ultimately, it is the voters who must decide whether the refusal of a ‘recognized candidate throughout the nation or throughout California for the office of President of the United States’ to make such information available to the public will have consequences at the ballot box.”

Enforcement of SB27, which was signed into law by Governor Gavin Newsom (D) on July 30, 2019, had already been enjoined by Judge Morrison England of the U.S. District Court for the Eastern District of California. In his opinion, dated October 1, 2019, England wrote, “[The] Court finds that Plaintiffs are likely to prevail on the merits of their arguments that the Act 1) violates the Presidential Qualifications Clause contained in Article II of the United States Constitution; 2) deprives Plaintiffs of their rights to associate and/or to access the ballot, as guaranteed by the First Amendment of the Constitution; 3) further violates the Constitution’s Equal Protection Clause as set forth in the Fourteenth Amendment; and 5) is preempted by the provisions of [the Ethics in Government Act of 1978] in any event.”

On Oct. 8, California Secretary of State Alex Padilla (D) appealed England’s ruling to the U.S. Court of Appeals for the Ninth Circuit. In light of the state supreme court’s ruling on the matter, Padilla announced Nov. 21 he would abandon his appeal to the Ninth Circuit.