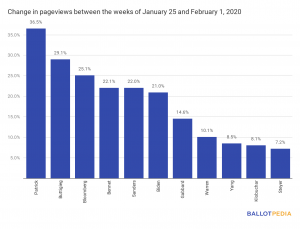 Each week, we report the number of pageviews received by 2020 presidential campaigns on Ballotpedia. These numbers reflect the time investments of our community of thousands of readers who visit Ballotpedia because they think the candidate is worth knowing more about, whether they believe the candidate has a strong chance of winning or is an unknown who warrants a closer look.

The top three Democratic presidential candidates in lifetime pageviews are Andrew Yang with 167,030, Pete Buttigieg with 156,598, and Biden with 151,530. John Delaney, who ended his presidential campaign last week, received 62,196 pageviews since February 2019.