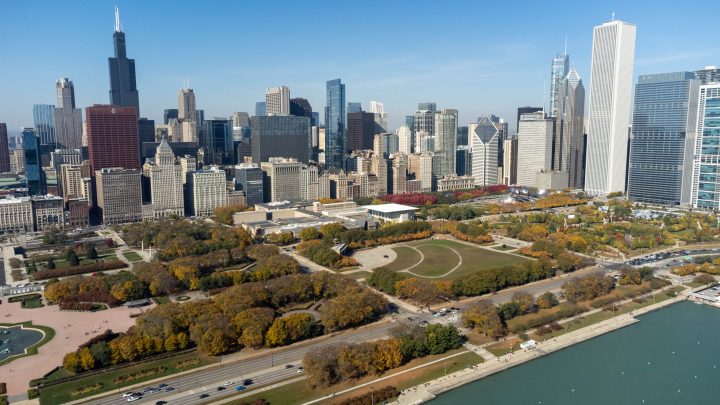 Willie Wilson has reported the most fundraising of all nine candidates running for mayor of Chicago, Illinois, on Feb. 28. Wilson reported raising $6.1 million. WTTW reported that $5 million was self-funded. Mayor Lori Lightfoot spent the most at $4.3 million. These figures include all reports filed through Dec. 31, 2022.

The other candidates in the election are Kambium Buckner, Ja’Mal Green, Sophia King, and Roderick Sawyer. If no candidate receives a majority of votes in the general election, the top two candidates will compete in a runoff on Apr. 4. The last two mayoral elections (2019 and 2015) resulted in runoffs.

DeSantis was the only executive whose full slate of candidates won. Across all 106 endorsements, candidates had a 56.6% success rate.

The table below shows the percentage of Americans living in each type of state going back to before the 2018 elections.

Eleven candidates are running for mayor of Chicago, Illinois, in the February 28, 2023, general election. If no candidate receives more than 50% of the vote, a runoff election will take place on April 4, 2023. The filing deadline for this election was November 28, 2022.

Lightfoot was elected mayor in 2019. Lightfoot won 17.5% of the vote in a 14-candidate field in the general election. In the runoff, she defeated Toni Preckwinkle 74% to 26%. Lightfoot has campaigned on her record as mayor, saying she “led the city through the unprecedented challenges of a global pandemic with tough, fair leadership — all while keeping or overdelivering on campaign promises.” U.S. Sen. Tammy Duckworth (D), U.S. Reps. Danny K. Davis (D), Robin Kelly (D), and Bobby Rush (D), two city aldermen, and the LGBTQ Victory Fund endorsed Lightfoot. Lightfoot is affiliated with the Democratic Party.

Garcia was elected to the U.S. House as a Democrat in 2018. Before serving in Congress, he was a member of the Cook County Board of Commissioners, the Illinois Senate, and the Chicago City Council. Garcia said his time at multiple levels of government would help him serve as mayor. “Mark my words: my values and my commitment to build a better, more inclusive Chicago has never waivered. I’m the only candidate in the race with the experience of serving the city at every level of government,” he said. Four members of the state legislature, two city aldermen, and three railroad unions endorsed Garcia.

Johnson was elected to the Cook County Board of Commissioners as a Democrat in 2018. He was a teacher with Chicago Public Schools and an organizer with the Chicago Teachers Union (CTU). Johnson highlighted his experience in education and said he is “the only candidate who has been a leader in our communities in the fights for fully funded public schools, affordable housing, green jobs and access to mental health care.” U.S. Rep. Delia Ramirez (D), two city aldermen, the CTU, and Service Employees International Union endorsed Johnson.

This year, 98 U.S. House districts overlapped with at least one Pivot County. As of Nov. 16, Republicans won 61 of those districts and Democrats won 35. Among the two uncalled races, a candidate from each party leads in one.

Nineteen U.S. House districts overlapped these Reverse-Pivot Counties. As of Nov. 16, Democrats had won nine and Republicans had won eight. Both parties each lead in one of the two uncalled races. 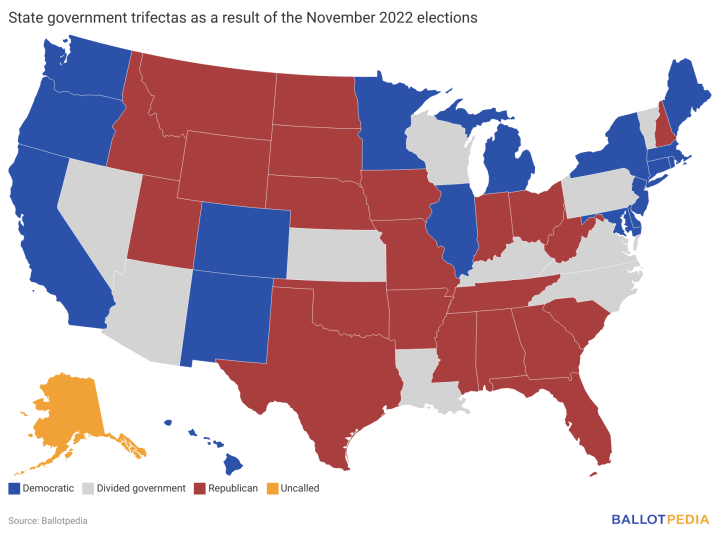 State government trifecta is a term to describe single-party government, when one political party holds the governorship and majorities in both chambers of the state legislature.

At the time of the 2022 election, there were 23 Republican trifectas, 14 Democratic trifectas, and 13 divided governments where neither party held trifecta control.

What state-level offices are on the ballot this year in North Carolina?

Want to review the campaign finance data in North Carolina so far? Click here to explore the data on Transparency USA.

Candidates and organizations involved in Indiana’s statewide elections must file campaign finance information by November 1, 2022. The general election will take place in Indiana on November 8, 2022.

What state-level offices are on the ballot this year in Indiana?

Want to review the campaign finance data in Indiana so far? Click here to explore the data on Transparency USA.

Candidates and organizations involved in Minnesota’s statewide elections must file campaign finance information by October 31, 2022. The general election will take place in Minnesota on November 8, 2022.

What state-level offices are on the ballot this year in Minnesota?

Want to review the campaign finance data in Minnesota so far? Click here to explore the data on Transparency USA.