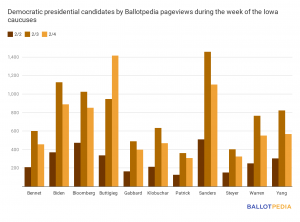 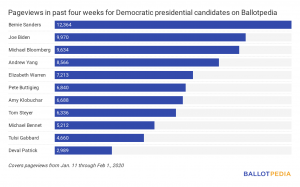 The Democratic Iowa caucuses were held on February 3, 2020, though the Iowa Democratic Party delayed releasing the caucus results due to quality control issues.

Each of the three largest day-over-day pageview jumps occurred between the day before the caucuses and the day of the caucuses. Elizabeth Warren’s pageviews jumped by 67.45% during this time, followed by Joe Biden (67.05%) and Tulsi Gabbard (66.67%).