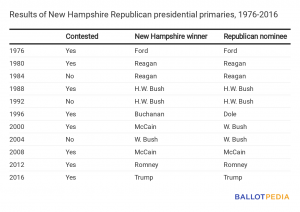 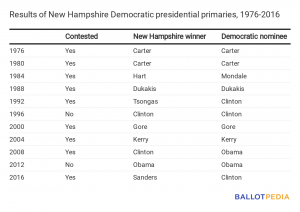 In total, 33 Democrats are listed on the New Hampshire primary ballot. To be allocated one or more of New Hampshire’s 24 pledged delegates, a Democratic candidate must receive at least 15 percent support.

On the Republican side, President Donald Trump and 16 other Republicans are running for 22 delegates. Delegate allocation in the New Hampshire Republican primary is proportional.

New Hampshire celebrates its centennial anniversary of holding the first-in-the-nation presidential primary this year. The nature of the primary has changed throughout the century, starting with voters choosing which party members would go to the nominating convention to backing the presidential candidate of their choice.