In this month’s edition of Checks and Balances, we review a new dissent from Justice Clarence Thomas challenging the constitutionality of Chevron deference; the implementation of a Trump administration rule narrowing federal jurisdiction under the Clean Water Act; and a SCOTUS decision that limits the court’s ability to review certain patent decisions, even in the case of potentially unlawful agency action.

At the state level, we review an Arkansas Supreme Court decision that limits judicial deference to state agency interpretations of laws, and litigation across the country that challenges gubernatorial stay-at-home executive orders in response to the coronavirus pandemic.

We also highlight a new analysis that calls for more robust congressional regulatory review as well as findings from Ballotpedia’s analysis of the nondelegation doctrine across the 50-states. As always, we wrap up with our Regulatory Tally, which features information about the 203 proposed rules and 243 final rules added to the Federal Register in April and OIRA’s regulatory review activity.

An analysis by William Yeatman, a Cato Institute research fellow, proposes a new framework for congressional review of administrative regulations.

“In this political environment, the traditional model for Article I agencies—a single organization headed by a nonpartisan director—won’t work. It’s not simply a matter of agreeing on leadership. One office cannot serve two masters with mutually exclusive conceptions of regulatory review. The only way to cut the Gordian knot of partisan disagreement is to arm each side with its own sword. Instead of adopting the historical model of a single “nonpartisan” organization, Congress should create two versions of OIRA—one for the majority and the other for the minority. Under this proposal, each side would gain its own mechanism to compete with the president for management primacy over the administrative state, in accordance with each side’s values.”

Five pillars of the administrative state: a 50-state survey

According to the BP survey, 18 states restricted the authority of state legislatures to empower agencies or other governing bodies to make rules about certain subjects. The survey revealed the following six types of restrictions: 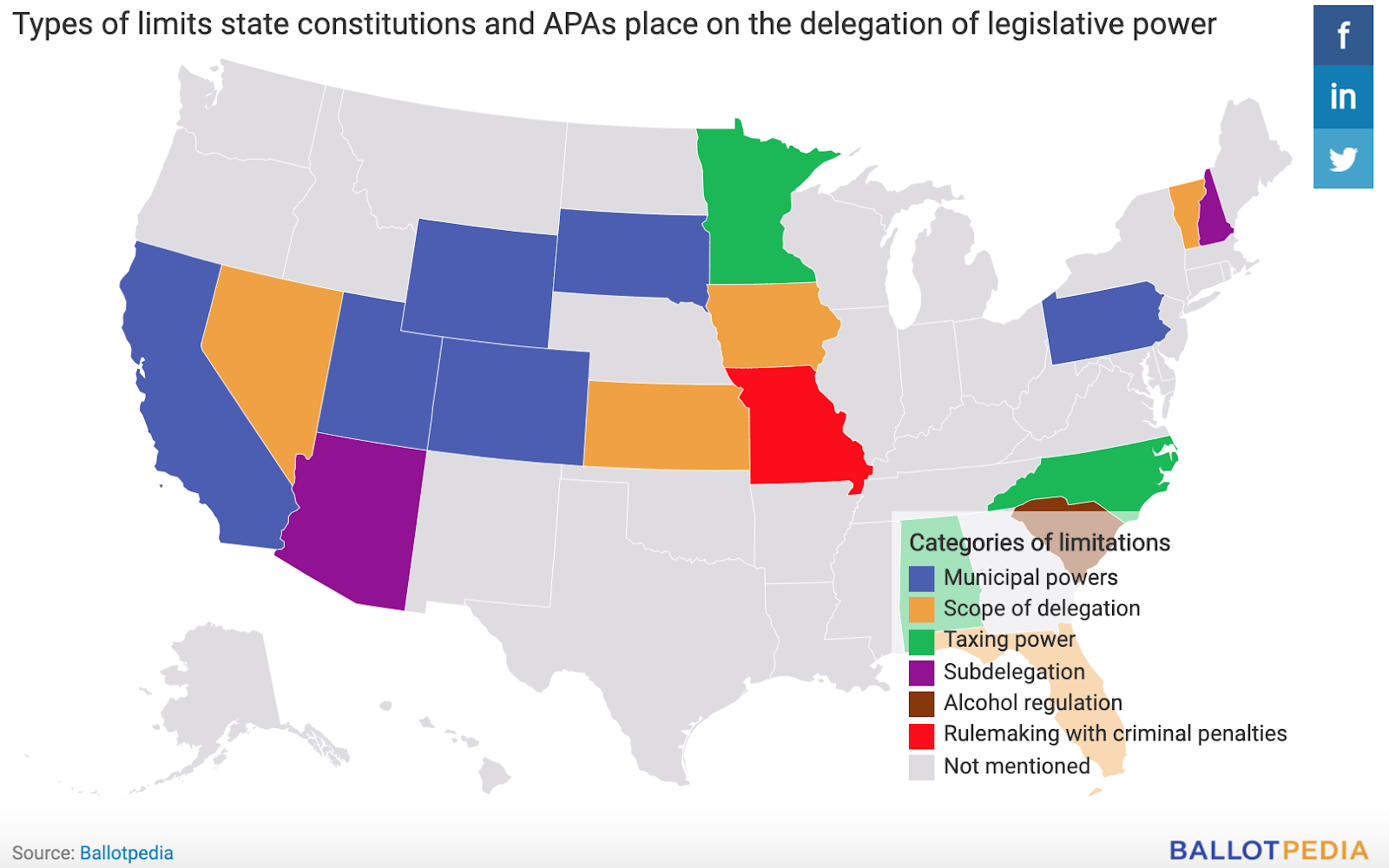 Additional findings showed that 40 states, 80%, had separation of powers clauses in their constitutions. An interpretation of the vesting clause of Article I of the U.S. Constitution, coupled with separation of powers principles, forms the theoretical basis of the nondelegation doctrine at the federal level.