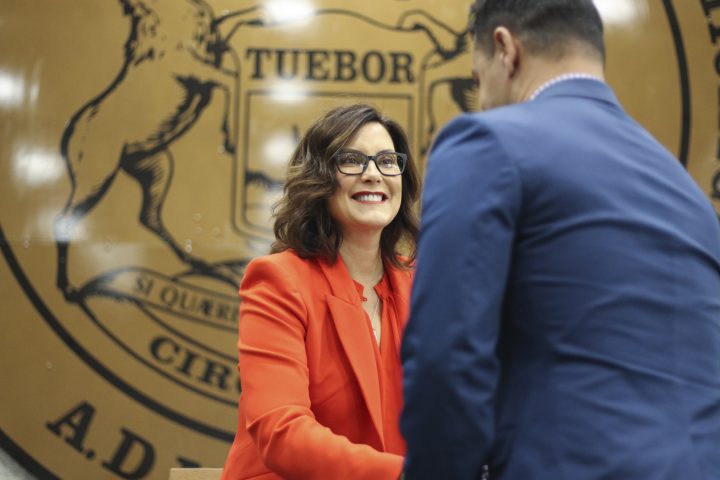 The Michigan Board of State Canvassers on June 8 approved the petition language for a recall against Michigan Gov. Gretchen Whitmer (D). Supporters of the recall need to submit 1,062,647 signatures within a 60-day period to force a recall election. The 60-day period begins on the first day that signatures are collected. According to WTVB, chief petitioner Chad Baase plans to start collecting signatures on July 1, 2020. That would make the signatures due by August 30, 2020.

The recall petition criticizes Whitmer over nine of her executive orders that she signed during the coronavirus pandemic. The orders include her declaration of emergency and the temporary suspension of non-essential businesses and activities.

Baase said about the recall, “She didn’t put through effective measures with COVID to ensure businesses didn’t have to close their doors. Some places couldn’t social distance under the federal guidelines, but many businesses could have stayed open with safety guidelines in place and were forced out of work. You can’t take away someone’s income and say you’re eligible for pandemic unemployment but then you can’t speak with anyone. I’m still waiting on my unemployment. They owe me 10 weeks.”

Christopher Mills, a senior adviser to Gov. Whitmer’s campaign, said the following about the recall effort: “Michiganders know that the vast majority support the governor’s swift and aggressive action in the fight against COVID-19. The governor plans to fight this recall aggressively while staying focused on protecting Michigan families from the spread of COVID-19.”

Six gubernatorial recall efforts are currently underway in 2020. From 2003 to 2019, Ballotpedia tracked 21 gubernatorial recall efforts. During that time, two recalls made the ballot, and one governor was successfully recalled. Former California Gov. Gray Davis (D) was recalled in 2003 and replaced by Arnold Schwarzenegger (R). In 2012, former Wisconsin Gov. Scott Walker (R) was retained in a recall election. The only other governor to ever be successfully recalled was former North Dakota Gov. Lynn Frazier (R) in 1921.