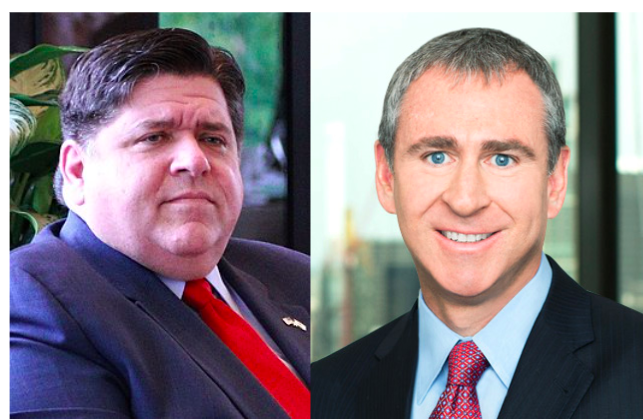 Gov. J.B. Pritzker advocated for a graduated income tax on the campaign trail in 2018. Through October 2, Pritzker provided $56.50 million, or 96 percent, of the support campaign’s $59.00 million. “People like me should pay more and people like you should pay less,” said Pritzker.

Opponents of the constitutional amendment have organized several PACs, which together raised $58.69 million through October 2. Kenneth Griffin, CEO of the investment firm Citadel, contributed $46.75, or 96 percent, of the opposition campaign’s total funds. Griffin said a graduated income tax would mean “the continued exodus of families and businesses, loss of jobs and inevitably higher taxes on everyone.”

Pritzker and Griffin have each provided 96 percent of their respective side’s total campaign funds. On the support side, other top donors include the AARP ($674,445), the Omidyar Network ($500,000), and the National Education Association ($350,000). On the opposition side, other top donors include the Illinois Opportunity Project ($550,000), Duchossois Group Executive Chair Craig Duchossois ($200,000), and Petco Petroleum CEO Jay Bergman ($200,000).

The most expensive in the country for 2020 is California Proposition 22, which would define app-based drivers as independent contractors. The combined support and opposition campaign contributions exceeded $200 million on October 2. Uber, Lyft, Instacart, Doordash, and Postmates provided $186.19 million to the campaign supporting Proposition 22. Opposing PACs received $13.91 million through October 2, with top funders including labor unions, such as the International Brotherhood of Teamsters, SEIU-UHW West, and Service Employees International Union.