On March 19, the court postponed hearing the case Terry v. United States, removing it from the April argument session. The Biden administration had changed the U.S. Department of Justice’s position in the case, so the court appointed a lawyer to argue in place of the U.S. government and rescheduled the oral argument.

On March 25, the court rescheduled argument in Terry for May 4, the only case to be argued during the court’s May sitting.

The Supreme Court continues its March argument session this week, hearing cases remotely and streaming live argument audio to the public. The court is conducting proceedings this way in accordance with public health guidance in response to COVID-19.

SCOTUS will hear arguments in four cases for a total of three hours of oral argument. Click the links below to read more about these cases:

Between 2006 and 2010, Goldman Sachs Group (“Goldman”), a multinational investment banking firm, made public statements about its business practices. A group of Goldman shareholders (“Shareholders”) alleged in U.S. district court that the statements were false because Goldman made them while knowing it had several undisclosed conflicts of interest. According to the 2nd Circuit opinion in the case, Goldman was publicly marketing risky financial products as ordinary asset-backed securities while internally, the company was allowing a hedge fund client access to create the products. Then, both Goldman and the client bet against the products, meaning that they would profit off of the transaction performing poorly or failing. Meanwhile, the shareholders experienced financial losses on the transactions.

In 2010, Goldman disclosed its conflicts of interest. In 2011, the Shareholders filed a class action complaint against Goldman. On remand for further proceedings from the U.S. Court of Appeals for the 2nd Circuit, the district court certified the class, allowing the complaint to continue. Goldman requested the certification be reversed. On appeal, the 2nd Circuit affirmed the district court’s judgment.

“1. Whether a defendant in a securities class action may rebut the presumption of classwide reliance recognized in Basic Inc. v. Levinson, 485 U.S. 224 (1988), by pointing to the generic nature of the alleged misstatements in showing that the statements had no impact on the price of the security, even though that evidence is also relevant to the substantive element of materiality.

“2. Whether a defendant seeking to rebut the Basic presumption has only a burden of production or also the ultimate burden of persuasion.”

Sergio Ramirez acted as a representative for a class action lawsuit against credit report agency TransUnion. Ramirez alleged that TransUnion willfully violated the Fair Credit Reporting Act when the company indicated on his credit report that his name appeared on a government list of individuals prohibited from conducting business in the United States.

A jury in U.S. district court awarded more than $60 million in damages to the class members. On appeal, the 9th Circuit upheld the district court’s judgment but reduced the per-member punitive damages amount. TransUnion appealed to the U.S. Supreme Court.

The questions presented: Whether Article III of the U.S. Constitution or Rule 23 of the Federal Rules of Procedure authorize a damages class action lawsuit where the majority of the class was not actually injured, even if the class representative suffered an atypical injury.

In 2014, a class of Division 1 (“D1”) student-athletes, collectively referred to as “Alston” and as “student-athletes”, filed several antitrust complaints against the National Collegiate Athletic Association (“NCAA”) and 11 D1 conferences with the U.S. District Court for the Northern District of California challenging the NCAA’s compensation rules for student-athletes. The NCAA claimed the challenge was settled in O’Bannon v. NCAA. The Northern District of California ordered the NCAA to make its compensation rules less restrictive for student-athletes and concluded the compensation rules were unlawful restraints of trade under the Sherman Act. On appeal, the 9th Circuit affirmed the district court’s conclusion, its injunction, and its assessment of liability. The NCAA appealed to the Supreme Court.

SCOTUS issued two opinion(s) since our March 22 issue. The court has issued 21 opinions so far this term. Four cases were decided without argument.

In both cases, plaintiffs were involved in car accidents in Ford vehicles (one in Montana and one in Minnesota) and later filed liability claims against the manufacturer. Ford filed for dismissal in the cases, arguing the state courts didn’t have jurisdiction to hear the cases. Both the Minnesota and Montana state supreme courts ruled that state courts were an appropriate forum for the cases. Ford appealed to SCOTUS for review.

In an 8-0 ruling, the U.S. Supreme Court affirmed the state courts’ rulings, holding that the connection between the plaintiffs’ liability claims in the two cases and Ford’s activities in both states allowed the state courts to have jurisdiction. Justice Elena Kagan delivered the majority opinion, her first of the term. Justices Samuel Alito and Neil Gorsuch filed concurring opinions. Justice Clarence Thomas joined Gorsuch’s concurrence. Justice Amy Coney Barrett took no part in the consideration or decision of the case since the case was argued prior to her joining the court. Click here to read more about the outcome of these cases.

The court also issued an opinion in Torres v. Madrid, a case originating from the U.S. Court of Appeals for the 10th Circuit that concerned a claim of excessive force against police officers and whether the use of physical force to restrain a person constitutes a seizure under the Fourth Amendment.

While attempting to arrest an individual at an Albuquerque apartment complex, New Mexico state police officers Richard Williamson and Janice Madrid approached Roxanne Torres in the parking lot to discover her identity. Thinking the police were carjackers, Torres got in her car and attempted to drive away. The officers ordered her to halt and shot her twice. Torres drove from the scene and was treated at a hospital for her injuries. Later, Torres was arrested and pleaded no contest to three crimes related to the event. Torres filed a civil lawsuit against the officers in U.S. district court claiming they had used excessive force and violated her Fourth Amendment rights. The district court ruled the officers were entitled to qualified immunity and there had been no seizure because the detention was unsuccessful–i.e., Torres left the scene. The 10th Circuit affirmed the district court’s ruling, joining an existing circuit split on this question of law.

In a 5-3 opinion, SCOTUS vacated the 10th Circuit’s judgment and remanded the case for further proceedings, ruling that using physical force on an individual with the intent to restrain is a seizure, even if the individual does not submit and is not subdued. Chief Justice John Roberts delivered the majority opinion. Justice Neil Gorsuch filed a dissenting opinion, joined by Justices Clarence Thomas and Samuel Alito. Justice Amy Coney Barrett took no part in the consideration or decision of the case. Click here for more information about the ruling.

SCOTUS accepted two cases since our March 22 issue which will be scheduled for argument during the upcoming October 2021-2022 term. The court has granted review in 10 cases for the term, which is scheduled to begin on October 4, 2021.

In 2013, brothers Dzhokhar and Tamerlan Tsarnaev detonated two homemade bombs at the Boston Marathon. Tamerlan died days later in a confrontation with police. In 2015, Dzhokhar was indicted on and convicted of 30 criminal charges related to the bombings. He was sentenced to death for several of the offenses.

Dzhokhar appealed to the U.S. Court of Appeals for the 1st Circuit, alleging the jury- and venue-selection processes in his case violated his constitutional rights to due process, an impartial jury, and a reliable sentencing ruling. He also claimed that the U.S. district court judge erred in applying the death penalty for some of the convictions. The 1st Circuit affirmed in part, reversed in part, and vacated in part the district court’s ruling. The court rescinded the death sentences and remanded the case back to the lower court for further proceedings.

The questions presented to the court are:

“1. Whether the court of appeals erred in concluding that respondent’s capital sentences must be vacated on the ground that the district court, during its 21-day voir dire, did not ask each prospective juror for a specific accounting of the pretrial media coverage that he or she had read, heard, or seen about respondent’s case.

“2. Whether the district court committed reversible error at the penalty phase of respondent’s trial by excluding evidence that respondent’s older brother was allegedly involved in different crimes two years before the offenses for which respondent was convicted.”

Servotronics filed a subpoena–an order requiring testimony or information–with the U.S. District Court for the Northern District of Illinois to compel Boeing to provide documents for the arbitration proceedings. The Northern District of Illinois at first granted and then voided the subpoena, after Boeing and Rolls-Royce petitioned the court to deny the request. On appeal, the U.S. Court of Appeals for the 7th Circuit upheld the ruling, holding that U.S. district courts are not authorized to compel discovery, i.e. grant a subpoena, in private foreign arbitrations.

The questions presented to the court are: “Whether the discretion granted to district courts in 28 U.S.C. §1782(a) to render assistance in gathering evidence for use in ‘a foreign or international tribunal’ encompasses private commercial arbitral tribunals, as the Fourth and Sixth Circuits have held, or excludes such tribunals without expressing an exclusionary intent, as the Second, Fifth, and, in the case below, the Seventh Circuit, have held.”

SCOTUS has released 21 opinions so far this term. SCOTUS issued its first opinion in 1791–what was the name of that case?

The federal judiciary currently has 72 vacancies. As of publication, there were no pending nominations.

Put on your best grunge flannels and cue up Peter Gabriel’s classic “In Your Eyes” on the boombox, because it’s time to travel back to a bygone era known as 1989 to 1993. This edition of Bold Justice takes a look at President George H.W. Bush’s (R) judicial nominees. 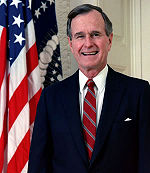 During his term of office, President Bush made 197 successful judicial appointments where the nominee joined the court. Of those appointments, 188 were Article III judges. Among the most notable of these are Supreme Court Justices Clarence Thomas and David Souter.

When President Bush assumed office in January 1989, he inherited 37 life-term vacancies out of 757 total Article III judgeships (4.89%), the lowest vacancy percentage of all presidents since the inauguration of President Ronald Reagan (R) in January 1981.

Of his Article III appointees–not including Supreme Court nominations–Bush appointed 42 judges to the United States Courts of Appeal, 148 judges to U.S. district courts, and one judge to the U.S. Court of International Trade.