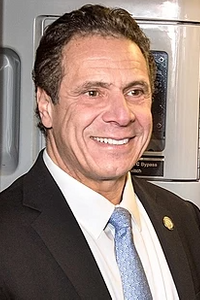 Kathy Hochul (D) will serve the remainder of Cuomo’s term, which ends on Jan. 1, 2023. New York’s next gubernatorial election will take place in November 2022.

New York Attorney General Letitia James (D) released a report on Aug. 3 that said Cuomo “sexually harassed a number of current and former New York State employees by, among other things, engaging in unwelcome and nonconsensual touching, as well as making numerous offensive comments of a suggestive and sexual nature that created a hostile work environment for women.” James began the investigation in February.

The New York State Assembly had initiated impeachment proceedings against Cuomo in March, examining the allegations of sexual misconduct among other accusations of impeachable conduct. At the time of Cuomo’s announcement, the Assembly’s Judiciary Committee had planned to finish its impeachment inquiry by Aug. 13, allowing for a vote on impeachment later this month or in September. Had Cuomo been impeached, the next step would have been a trial before the state Senate.

Cuomo denied these allegations, saying, in part, “To be clear I never inappropriately touched anybody and I never propositioned anybody and I never intended to make anyone feel uncomfortable.” At a press conference announcing his resignation, Cuomo said, “Given the circumstances, the best way I can help now is if I step aside and let government get back to governing. And therefore that’s what I’ll do.”

Hochul was elected lieutenant governor in 2014 and re-elected in 2018. Before that, she served in the U.S. House from 2011 to 2012 after winning a special election. Hochul will be the first woman governor in the state’s history.

Since 1776, 218 state governors have resigned before the expiration of their term. Cuomo is the ninth governor of New York to resign. Six resigned to take another office, and three resigned following allegations of misconduct. New York’s last elected governor, Eliot Spitzer (D), resigned in 2008 amid allegations of misconduct. Spitzer’s lieutenant governor, David Paterson (D), served through 2010. Twelve governors of New Jersey have resigned, more than any other state.

Of the 219 gubernatorial resignations nationwide since 1776, 76% took place because the governor was elected or appointed to another office, 7% took place following allegations of misconduct, and 17% were for various personal reasons, such as illness or policy disputes with the state legislature. Andrew Johnson (D) resigned as Governor of Tennessee on two separate occasions.