Welcome to the Friday, October 8, Brew. Just a heads up: there will be no Brew on Monday but we will be back in your inbox on Tuesday. Enjoy the long weekend!

Note: Louisiana’s primary elections were originally scheduled for tomorrow, Oct. 9, but were moved to Nov. 13 due to damage caused by Hurricane Ida. Learn more.

Three states—Indiana, Maine, and Nebraska—adopted new congressional district maps between Sept. 29 and Oct. 6. Oregon is the only other state to adopt a congressional map in the 2020 redistricting cycle so far.

At this point in the 2010 cycle, 21 states had adopted congressional district maps. The relative delay in 2021 is caused by a delay in the delivery of census data. During the 2010 cycle, states began receiving block-level census data near the start of 2011. In 2021, by comparison, this data was not released until Aug. 12.

In each of these three states, the state legislature is responsible for drawing new district lines, which must then be signed by the governor before going into effect. Indiana and Nebraska, which, collectively, have 12 congressional districts, are both Republican trifectas, meaning Republicans control the legislature and the governorship. Maine, with two congressional districts, is a Democratic trifecta.

Here’s a breakdown. Click on the state names to learn more.

In a statement issued after signing the state’s new district boundaries, Gov. Holcomb said, “I want to thank both the House and Senate for faithfully following through in an orderly and transparent way. And, a special thanks to every Hoosier who participated in the process by sharing their local perspective and input.”

In a statement following approval of the maps in the Assembly, State Sen. Eddie Melton (D) said, “I’m very disappointed by the partisan nature of the redistricting process as well as the actions by the supermajority to deliberately dilute minority voices.”

Upon signing the new district plans, Gov. Mills released a statement congratulating legislators “for preparing and approving new maps that fulfill our commitment to making sure Maine people are equally and fairly represented in their government,” adding, “To have done so without rancor and partisanship and under a constrained timeline is something Maine people can be proud of.”

Following the approval of the maps, Sen. Justin Wayne (D) said: “It was a very frustrating process, but we got to a good result.” Sen. Lou Ann Linehan (R), chair of the redistricting committee, expressed approval of the maps and, regarding the possibility of partisan impasse, said she was “constantly reminded how capable Sen. Wayne is” during the negotiations.

An effort to recall Beth Barts from her position as the Leesburg District representative on the Loudoun County Public Schools school board in Virginia moved forward at a pre-trial hearing on Oct. 5. At the hearing, Loudoun County Circuit Court Judge Jeanette Irby ruled that the recall effort could advance to a full trial, denying Barts’ motion to dismiss the petition against her since it was not signed by an attorney.

The judge also granted the recall petitioners’ request to appoint a special prosecutor to take the place of Loudoun County Commonwealth’s Attorney Buta Biberaj, whom recall supporters alleged was a friend of Barts’. The case will go to trial after the special prosecutor is named.

Barts was first elected on Nov. 5, 2019, receiving 54.8% of the vote. Though school board elections in Virginia are nonpartisan, Barts is supported by the Loudoun County Democratic Committee.

Supporters of Barts’ recall are also circulating petitions against four other members of the nine-member school board in Northern Virginia. In Virginia, recall efforts are determined in circuit court rather than through a public vote. Virginia allows an official to be recalled on the following grounds: neglect of duty, misuse of office, incompetence, or conviction of misdemeanors related to drugs or hate crimes.

Incumbent City Councilmen William Parker and John Hilliard lost to challengers J.T. Moore and LaTonya Tate, respectively, in the Oct. 5 general runoff election in Birmingham, Ala. The races for these two seats on the nine-seat city council advanced to a runoff after no candidate received a majority vote in the city’s Aug. 24 general election. 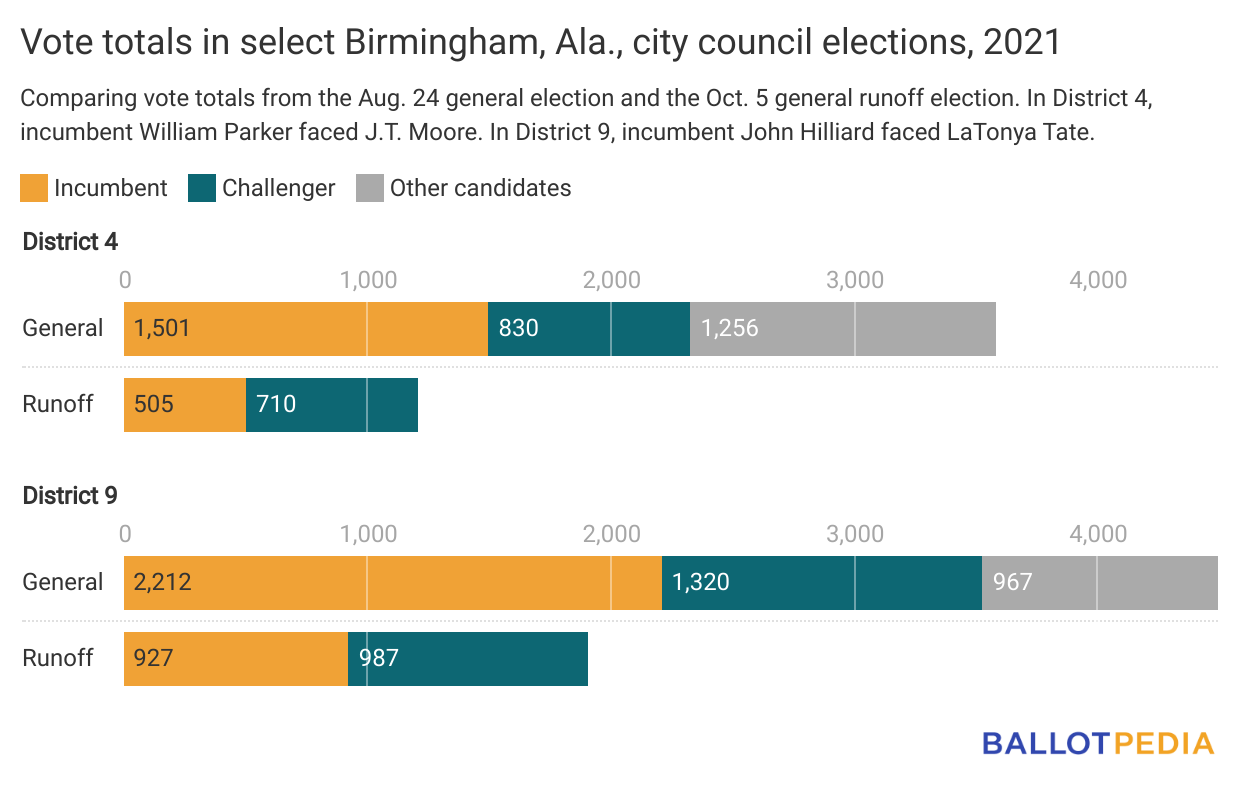 Candidates also competed for two seats on the nine-seat Birmingham Board of Education. In District 9, Jason Meadows earned 72.1% of the vote, defeating Le’Darius Hilliard with 27.9%. The District 1 race remained too close to call, with only a few votes separating incumbent Douglas Ragland from challenger Sherman Collins Jr.