Welcome to the Friday, October 29, Brew.

We are wrapping up the final full week ahead of the Nov. 2 general elections. Each day this week, we have brought you previews of battleground races at all levels of government. Here’s the schedule:

Today we are diving into our coverage of state and local ballot measures. There have been 39 statewide ballot measures certified for the 2021 ballot in nine states, 24 of which are up for a vote on Nov. 2. Additionally, we are covering over 150 local ballot measures across 18 states. Click here for our top 15 to watch. We will take a look at some of the most interesting below.

Colorado’s Proposition 119 is a citizen-initiated measure that would create the Learning Enrichment and Academic Progress Program, also known as the LEAP Program, and would increase the marijuana retail sales tax incrementally from 15% to 20% to partially fund the program.

The LEAP Program would provide out-of-school services that would consist of, but not be limited to, the following:

Colorado limits the types of measures that can appear on the ballot during odd years to topics concerning taxes or state fiscal matters arising under TABOR, the Taxpayer’s Bill of Rights. TABOR requires voter approval for all new taxes and associated changes. It also limits the amount of money the state can spend, with the excess being refunded to taxpayers unless voters allow the state to spend it. If Proposition 119 is approved, any revenue gathered from the increased marijuana sales tax would be considered voter-approved and exempted from TABOR provisions.

Maine’s Question 1 is a citizen-initiated measure that would prohibit the construction of certain electrical transmission lines in the state’s Upper Kennebec Region unless approved by two-thirds of the members of both chambers of the legislature. Question 1 was designed to stop the construction of Segment 1 of the New England Clean Energy Connect (NECEC), a 145-mile long, high-voltage transmission line project in the region.

According to campaign finance reports covering through Oct. 19, Question 1 had seen $94.0 million raised between supporters and opponents. Question 1 could also see the highest cost-per-vote ratio for a ballot measure ever recorded by Ballotpedia. If turnout this November is similar to turnout in recent election cycles (between 17% and 34% from 2015-2019), between 203,000 and 380,000 voters may cast ballots. That would result in a cost-per-vote ratio of anywhere between $247 and $463.

According to the Bangor Daily News, Question 1 is the most expensive ballot measure in Maine history, and the second most expensive political election in the state after the $200-million U.S. Senate race in 2020.

New Jersey legalized sports betting in 2011, but, due to federal laws, this was not implemented until after the U.S. Supreme Court’s 2018 ruling in Murphy v. NCAA.

Texas’ Proposition 6 is a legislatively referred constitutional amendment that would allow residents of nursing facilities, assisted living facilities, or state-supported living centers to designate an essential caregiver who may not be prohibited from visiting the resident. It would also authorize the Texas State Legislature to pass guidelines for facilities to establish visitation policies and procedures for essential caregivers.

This amendment was introduced following responses to the coronavirus pandemic in 2020. On March 15, 2020, the Texas Health and Human Services Commission ordered nursing facilities to prohibit non-essential visitors from accessing facilities. At that time, the order applied to 1,222 licensed and regulated nursing facilities serving around 90,000 residents.

Proposition 6 is one of eight constitutional amendments on the Texas ballot this November. Since 2011, the state legislature has placed an average of nine measures on each odd-year general election ballot.  Most recently, in November 2019, voters approved nine out of the 10 amendments on the ballot. In total, since 1876, when the current state constitution was adopted, it has been amended 507 times.

In addition to our regular local coverage, Ballotpedia has also been covering a selection of notable police-related ballot measures from both inside and outside of our coverage scope. Our criteria for inclusion include the following prompts:

Ballotpedia is covering six notable local police-related ballot measures on Nov. 2. Here’s a list with a quick breakdown of what they would do if passed:

Albany, N.Y., Proposal 7: Increases the authority of the Community Police Review Board over investigations and oversight of complaints against police.

Minneapolis, Minn., Question 2: Replaces the police department with a department of public safety in the city charter.

The total number of statewide ballot measures decreased by 45% over the past two decades from 235 in 2000 to 129 in 2020. In the current cycle, 55 measures were referred to the ballot or placed for a vote automatically and six measures that were placed on the ballot by citizens. 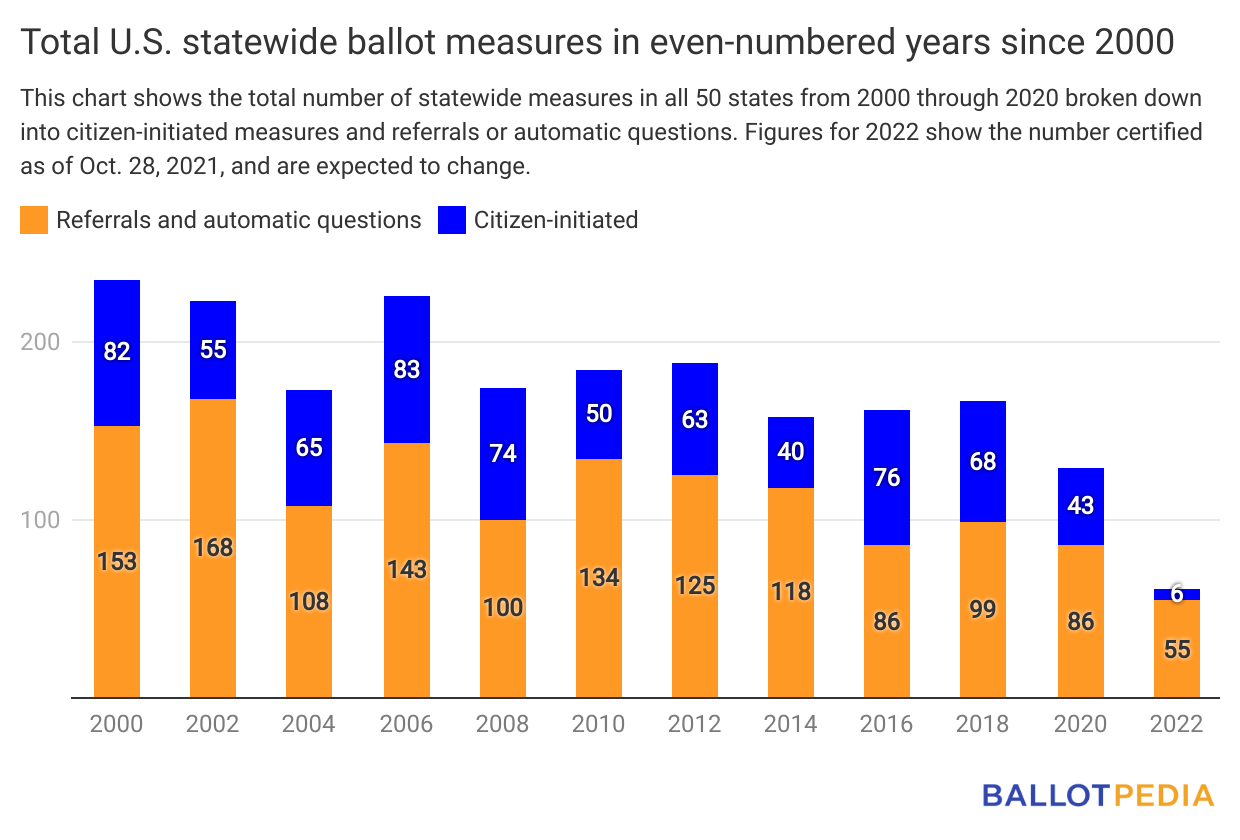 Numbers for 2022 will likely increase as a result of upcoming legislative sessions and signature-filing deadlines.