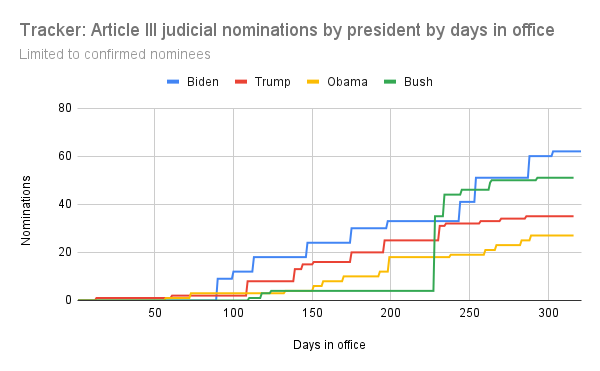 Through Dec. 1, 2021, there were 890 authorized federal judicial posts and 78 vacancies. Seventy-four of those vacancies were for Article III judgeships. This report is limited to Article III courts, where appointees are confirmed to lifetime judgeships.

The following data visualizations track the number of Article III judicial nominations by president by days in office during the Biden, Trump, Obama, and W. Bush administrations (2001-present).

The first tracker is limited to successful nominations, where the nominee was ultimately confirmed to their respective court:

The data contained in these charts is compiled by Ballotpedia staff from publicly available information provided by the Federal Judicial Center. The comparison by days shown between the presidents is not reflective of the larger states of the federal judiciary during their respective administrations and is intended solely to track nominations by president by day.